We have visitors arriving today – my daughter Victoria and her boyfriend James 😊  Of course visitors coming means housework ☹  Richard’s job is the sweep through while my jobs are – well everything else!!  I’ve been sending all sorts of messages to Victoria about things to bring out – she says my stuff is taking up a whole suitcase!!  Thank goodness they are flying BA where they get a baggage allowance otherwise she would be charging me!

I took a trip to the supermarket and then we took Muffin for a walk on the beach.

I was in contact with Toria and James at Gatwick where they were delayed at the gate by 25 minutes as one of the taxiways was out of use.  I was also following the flight on the Flightradar24 app and discovered that after I had had the message “we are off” they sat on the taxiway for a further 25 minutes!

Their flight was due to land at 18.55 but finally landed at 19.25.  By the time they had picked up the hire car it was about 21.00.  It is then a 125 mile journey with them arriving at about 23.30.  James was using Waze – a map app which he was able to share with me so I could follow their journey, the only trouble was that their car kept on going off the road and for a while was going down a railway track!!  Really weird!  However I watched them come down the Paseo and turn into Calle Dinamarca – as I walked up to the gate they were pulling in.  Amazing!!

Toria and James (well mainly Toria) wanted to go to the market at Villaricos so it was a fairly early start.  Richard stayed at home as Muffin finds the sea of legs and feet a bit frightening!!

After the market we walked down to Beachcomber, a restaurant we haven’t visited before.  On Sunday they have a BBQ cooked by Kenny who used to run a BBQ type of restaurant.  Toria had ribs and the rest of us had rib eye steaks.  They were so good, and we had a lovely sea view too 😊 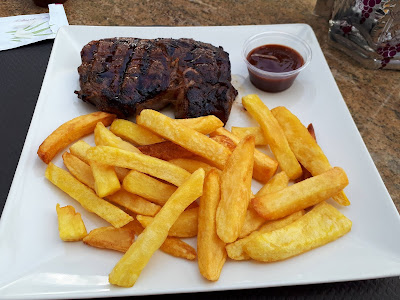 After Beachcomber we wandered down to the ice cream parlour for our desert.  Toria and James had a metre of ice cream between them!!  (These ice cream photos are especially for Brian Holt who seems to think our life out here revolves around ice cream – is there anything else!!!) 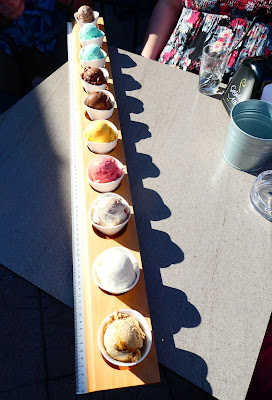 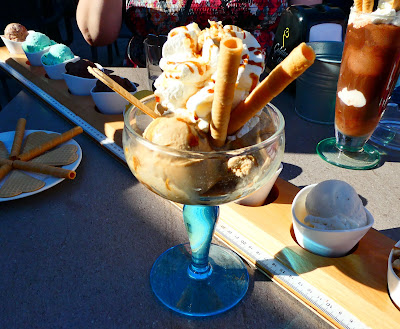 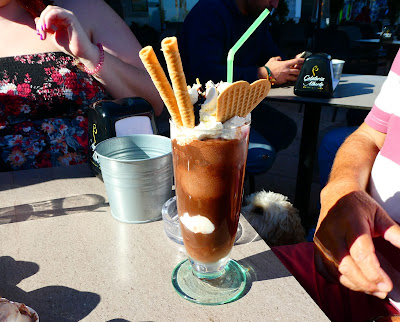 Toria very kindly brought us out a letter from the Spanish authorities informing us of a speeding fine.  We had got it on the day we took Penny and Jim back to Alicante Airport.  I was thinking how naughty Richard had been when I noticed the time – it was me ☹

Posted by Linda Gifford-Hull at 09:08