We woke up to the most amazing view of snow capped mountains.  We hadn’t seen them yesterday but today the sun was shining on them.  The view took away the stiffness caused by the bed which appeared to slope towards the window! 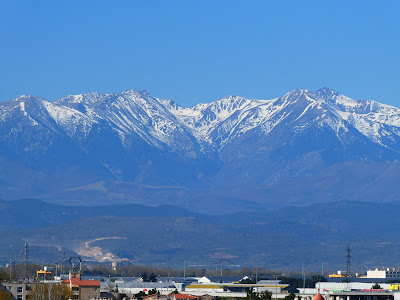 As we couldn’t go up the mountains on the train we drove up instead.  We could see the train track as it clung to the side of the mountains but it was quite deep in the valley – we had a much better view. 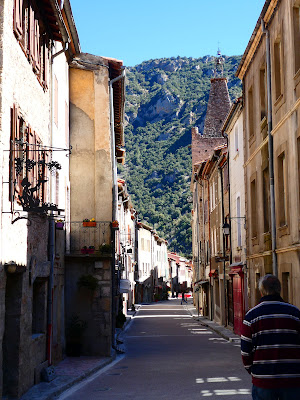 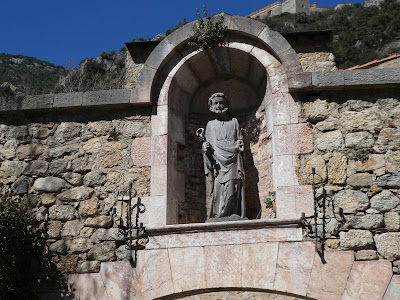 We stopped at Villefranche de Conflent, a small walled village with only 244 inhabitants.  The original town dates from 1098 and was fortified because of its strategic position in lands that changed hands between French and Spanish occupation.  In 1374, Villefranche resisted the siege of Jaume III the son of last king of Majorca.  In July 1654, the French captured the city after eight days, and the troops of Louis XIV took Puigcerda from the Spaniards.

The town was part of the program of construction and improvement of outlying French defences led by through 1707 by Marshal Vauban, and as such is listed as a World Heritage Site. 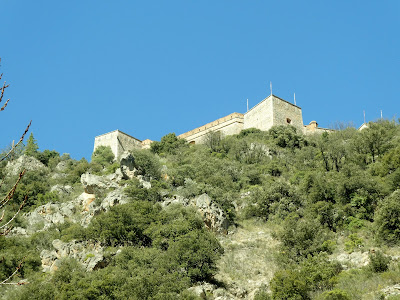 Above the town is Fort Liberia which is was built by Vauban in 1681 and fortified under Napoleon III (1850 - 1856).  The fort is connected to Villefranche by an underground staircase composed of 734 steps. The fort dominates the village at a height of about 500 feet.  The fort had at one time served as a prison for Louis XIV's poisoners.  It was made a UNESCO World Heritage Site July 7th 2008, as part of the Network of Major Sites by Vauban. 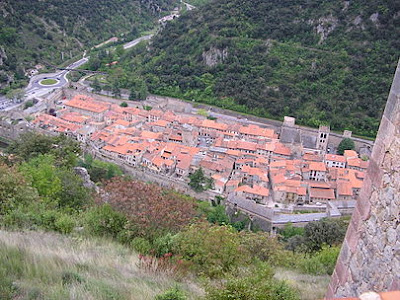 We found a café that was open, most were shut, and had croque monsieur and chips for lunch.

We continued on up to Mont-Louis which is another walled town, but we didn’t stop.  In 2008, the citadel and the city walls of Mont-Louis were listed as part of the Fortifications of Vauban UNESCO World Heritage Site. 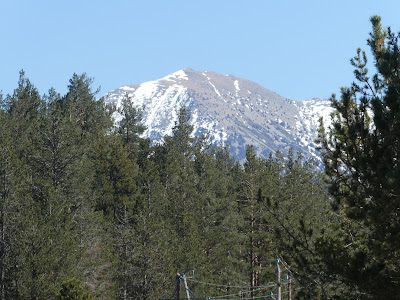 We continued on again towards Lake Bouillouses but the road was barred about 7 kilometres from the lake, so we turned round which was a shame as it is 6500 feet above sea level and the highest lake in the Pyrenees.  We stopped by the river which, I guess, comes out of the lake.  Muffin couldn’t believe it – GRASS!!!  He rolled and rolled and just enjoyed it – he hadn’t seen grass since we left home 2½ months ago!  He found some frozen snow and tried to eat it but that didn’t last long! 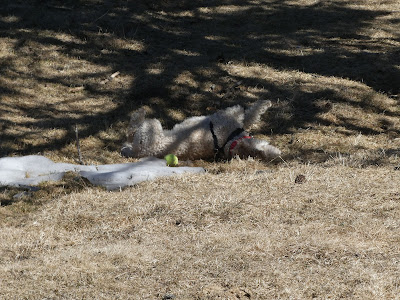 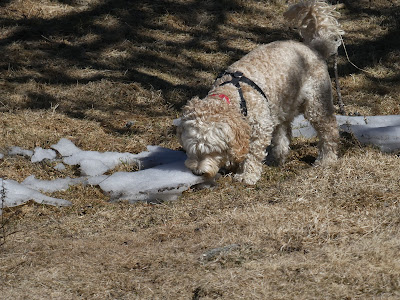 At this point we could see ski slopes – I think that they must put artificial snow down as there wasn’t really any other snow around them. 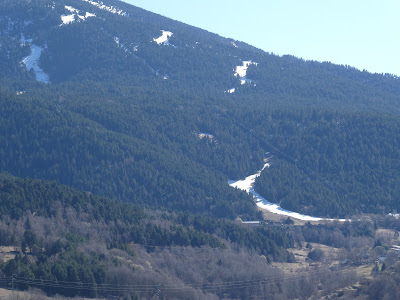 Just above Mont-Louis we saw the Citadel - the defence element of the stronghold of Mont-Louis.  It was built, again by Vauban in 1679 and as such is also UNESCO World Heritage Site.  It could house 2,500 soldiers.  However, since 1964, it is home to the National Centre of Training Commando squad – 1st Shock. 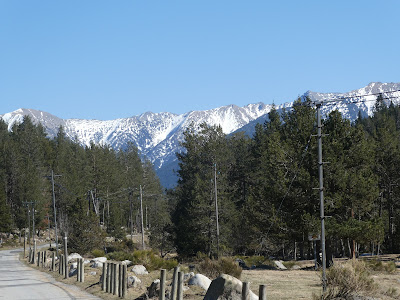 We crossed the The Méridienne Verte (Green Meridian) - a project devised by the architect Paul Chemetov for the 2000 celebration in France. It involved marking on the ground the Paris Meridian crossing France from North to South by planting trees along the whole line.

The highest mountain we could see was El Cambra d’Ase which is almost 9,000 feet. 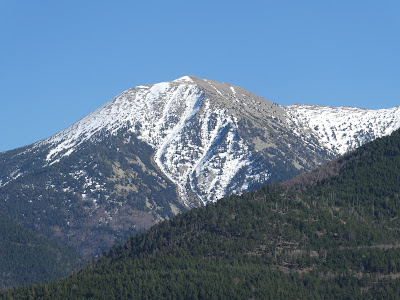 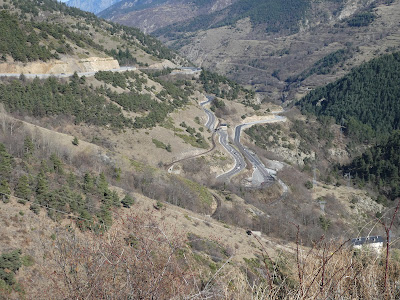 This bridge is the Pont Gisclard which carries the Yellow Train over the valley. 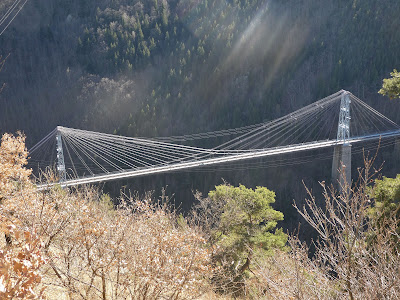 Back at the hotel we weren’t hungry after our strange lunch so just had bread and cheese.