I am really cross!  I had written most of today’s blog post here on Word as I always do before copying it to Blogger.  Microsoft then told me it wanted to do some updates, so I shut down both Word and Excel and when I opened them again, they had both gone back to July 10th!  The One Drive cloud hadn’t been working but I assumed that was because we were on a metered connection but the “save” facility seemed to be working but I can’t find the last version of the document anywhere!  So, not only have I got to do this post again, but I’ve got to copy and paste all the posts from Blogger to Word for 12 days!

Before we left our mooring, I noticed this lovely pot sitting on the Huf Haus’s veranda – I have pot envy now! 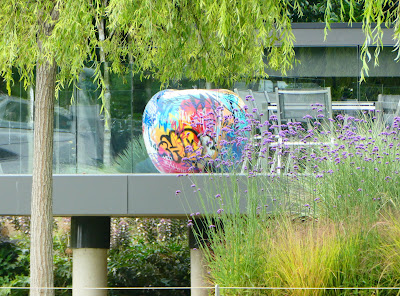 Down through Shepperton Lock and along the original route of the river to Manor Park.  Back in 1930 to 1935 a cut was dug, taking the river on a straight course between Weybridge and Walton, and avoiding a meandering stretch past Shepperton and Lower Halliford.  It improved the flow and eased the navigation on the river. 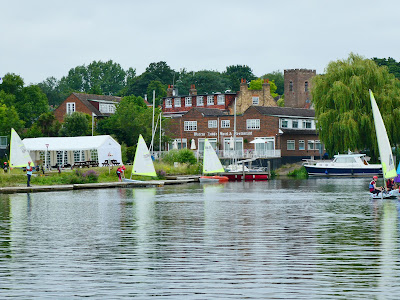 We hoped, as it was early, that there would be some mooring and there was – lots!  We moored up and went to chat to the only narrowboat there who happened to be Tony and Margaret on Huffler. 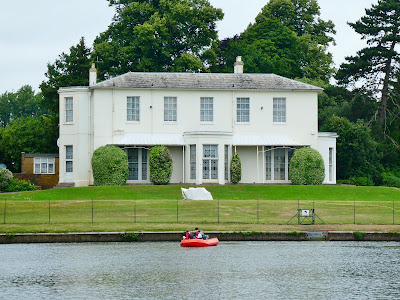 In the afternoon we put the chairs up on the bank and waited for another old friend to come for a cuppa.  I haven’t seen Hilary and her husband Robert since I left Shepperton in 2000.  When our children were at primary school, we used to share a school run and then my Robert and their Nick used to go to Scouts together.  Again, it was so nice to catch up with them both.

We stayed out on the bank as the boat was so hot in the sun.  I had planned a ready meal which would take 40 minutes to cook in the oven and the thought of more heat in the boat was too much so Richard walked into Shepperton and got pizza.  The only problem was that he carried them on their sides so all the topping slid off!!!

This photo was taken from the boat – I had really missed the best of the sunset. 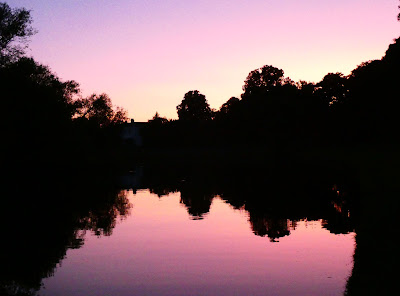 Posted by Linda Gifford-Hull at 13:36