We were expecting another visitor today, an old friend who sold his boat a few years ago.  We had arranged to meet on the main Henley moorings at 11am.  I messaged him and told him to walk to the river from the car park, turn left and we were in front of 2 wide beams.  Sadly, what I didn’t realise was that he wasn’t in the car park I thought he would be in, so he turned left and missed us completely, however a couple of messages later he found us.

We had coffee and a piece of lovely homemade fruit cake and set off down river.  The idea was to go to Hurley Lock and fill up with water.

As we approached Hambledon Lock it looked chaotic but on closer inspection we saw a marquee almost opposite the lock.  There were hoards of people there (no social distancing as far as I could see) eating and drinking.  It was in fact called the Lockdown Lodge, a pop-up restaurant running for 3 weeks during August and finishing on September 1st.  The Lockdown Lodge was started by Minna Hughes, after her gap year travelling was unfortunately cancelled. Not one to sit around and do nothing and inspired by her Grandpa's motto of "there's no such word as can't", The Lockdown Lodge was born!

Hambledon Lock was on self service and I played lock keeper again.  It’s a large lock and I got 5 boats in and, in fact, could have got another couple in but there weren’t anymore waiting to go down! 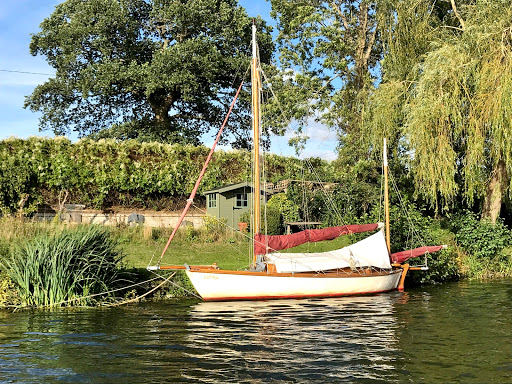 We cruised down to Hurley Lock, but it looked busy, so we made a U turn and moored up at Medmenham (I do get the names Medmenham and Remenham muddled up).  We got the barbecue out, plus the chairs, tables and the wine and beer!  Richard cooked us a lovely barbecue but then we had a very short but sharp shower, so it was back on the boat while it passed then out again for coffee!

Back up the river where, once again, Hambledon was on self service.  I don’t think I have ever operated that lock before as I was a bit confused by the console.  I thought we were going to have the lock to ourselves, but a large motor cruiser came up just in time to join us. 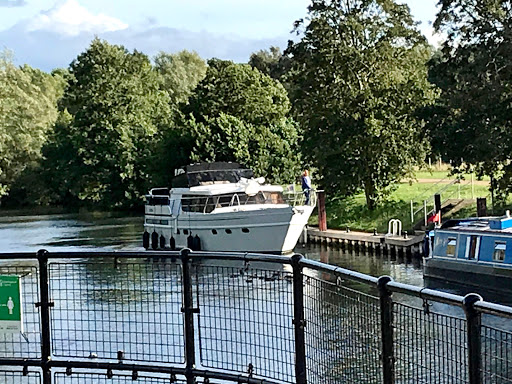 Up passed Temple Island with its folly, under Henley bridge and we hoped that we might find somewhere to moor so we could drop our visitor off and moor for the night.  We only managed the drop off as there was nowhere to moor. So, it was back down river to where we had moored last night.  It was quite late and there was no “little man” asking for money so we were pleased.