A hot and humid day – not nice.

We walked up into town to collect the Amazon package that I couldn’t collect the other day as the shop was shut.  We also went to Waitrose to fill up the cupboards again.

We walked into the Market Place and decided to have a coffee.  We sat down and ordered our coffee and it started to rain, only spots but it was rain ☹  We stayed outside as we had the dog but it didn’t come to much.  In the Market Place is this wonderful 15th Century Grade I listed building.  It is called the Round House now, but it used to be called Booth Hall.  Despite its names, it is not round and was probably not a booth or a hall, but may have been built as an inn. It was restored in 1964-5 and now houses a NatWest bank branch. 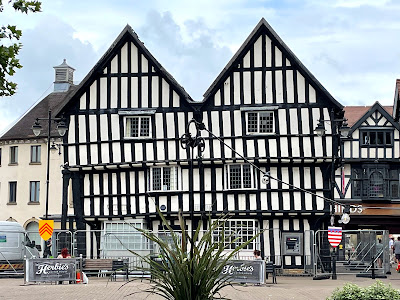 We also saw this vehicle and wondered why Fletcher Access needs such a posh truck but looking at their website they have lots of intriguing vehicles for accessing very tall buildings. 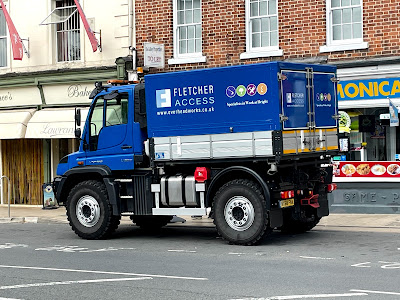 Back at the boat we got under way and headed up to Evesham Lock and then on to Offenham Lock.  You may remember last week we had got told off for sitting on private property at Offenham Lock.  I emailed the Avon Navigation Trust and got a reply this morning which told me the parts of the lock ANT own.  We were most definitely not sitting on private property.  However, the email did say that since lockdown and especially in the hot weather people have been picnicking and partying on the lock side.  I do feel that signs should be put up though. 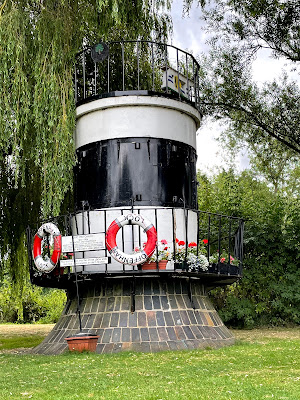 Our favourite mooring spot at Harvington Lock was free again so we moored up just before it started to rain.

While we were in Evesham this morning, we saw advertisements for the Battle of Evesham (1265) which is held over the first weekend in August.  This year it is the 7th and 8th of August.  I have learnt a lot about the Battle of Evesham and Simon de Montford, but I’m now in a bit of a dilemma as I can’t decide whether Simon was a goodie or a baddie!

Now for an interesting history lesson!  This is taken from the Battle of Evesham’s website.

The battle of 1265 was about the power of the king and the way he exercised it. This issue had troubled England throughout the 13th century. It had been taken for granted that government was the business of the king, helped by various officials. It was also accepted that he should rule justly and with the support of his barons. However, there was no clear idea what should be done if he mis-used his authority.

One solution had been tried in 1215. The barons rebelled against King John and forced him to accept the Magna Carta. This “Great Charter” was a long list of things King John promised not to do in the future. The charter did not work. Both John and his son, Henry III, broke their promises whenever they could. Complaining groups had to work out a better way to make the king keep his word.

The opportunity arose in 1258. Henry called a parliament, which criticised his policies and drew up new rules for the king to follow. They were known as the Provisions of Oxford (where the parliament met). A permanent council was set up to supervise the appointment and actions of the royal officers. Simon de Montfort was a leading member of the group.

During the next five years, amid shifting political alliances, two things remained constant: de Montfort always wanted to restrict the king’s freedom to govern as he wished, and Henry sought to evade such control. In 1264, the two sides were evenly matched, and quarrels flared into civil war. Henry’s army was soundly beaten at the Battle of Lewes. The king himself was captured and Prince Edward also became a hostage.

De Montfort and his allies now ruled England in the name of the captive king. They tried hard to arrive at a lasting settlement and called parliaments in June 1264 and January 1265, but both failed. The parliament of 1265 included a new element: representatives of several towns were summoned to attend along with lords, bishops, abbots and knights of the shires.

At this point de Montfort's support began to crumble.

On 28th May 1265, Edward escaped from his guards to join with Roger Mortimer of Wigmore and the Earl of Gloucester. The civil war resumed.

During the Battle of Evesham Simon was surrounded and unhorsed yet continued to fight bravely on foot. Swords clashed as a storm brewed overhead. As thunder roared, de Montfort was encircled. Several beat him to the ground and struck with their steel. Finally, Roger de Mortimer swung the final and fatal blow. His body was cruelly dismembered.

De Montfort's remains, and the bodies of his son Henry and that of Hugh le Despenser, were carried away by the monks and buried near the High Altar of the Abbey.

The Battle was one of the bloodiest battles ever to be fought in England,

I have really enjoyed researching this as I have discovered so much about a man who I had heard of but knew nothing about.  The festival sounds fascinating, and I am sad that we won’t still be in the area to attend.