Muffin has always got up on the bed with us while we drink our early morning tea but for the last few mornings he has been chewing his bone wherever it might be.  So this morning I wasn’t worried that he might be up to mischief – WRONG – when I got up he had been chewing Richard’s slipper and had more or less devastated it!!  Fortunately there is an M & S outlet just round the corner so Richard was able to replace said slippers. 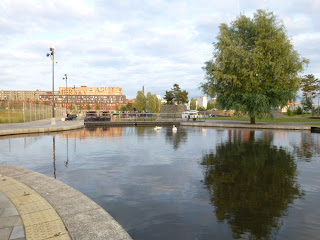 I decided to make good use of the marina's washing machines today so I was over at the laundry quite early.  The first problem was that the token machine wasn't working so I had to phone Ben, the warden, who came straight over and gave me some tokens.  I put the towels in the machine and came back to Mary H for breakfast.  I went back after 90 minutes and realised that, even though I had pressed the on/off switch, I hadn't pressed the start button!  I had another token so started it again. The other machine was then free so I put another load of washing in and set it going. It should all be ready about 12.45.  The rain started about 12.30 and stayed in all afternoon so we had wet washing around the boat all afternoon as there are no driers in the marina laundry.  We even put the heating on to try and help the drying process. 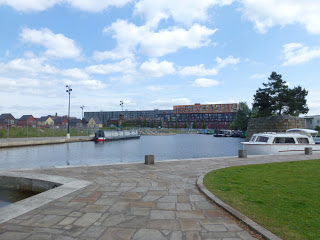 The best part of the day was that my cousin, Philip, came over with my laptop.  He had been into Nantwich and collected it as he was coming to Manchester for a meeting today.  He stayed for a quick cup of coffee and then I switched the laptop on and it has been working all day :-)  It is staying nice and cool so I am hoping that the new fan has done the trick - I guess that only time will tell. 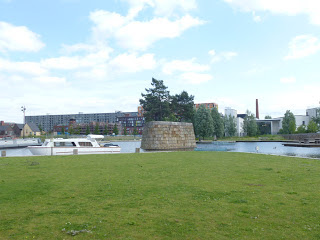 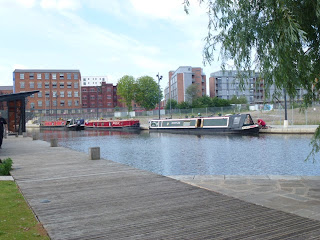 I was in a foul mood all afternoon with all the problems of the morning and then the rain.  At least my laptop was working and I ran a scan, updates and backed it up and all is good.

About 5pm I wondered over to Aldi and was quite impressed.  I had only ever been to a Lidl before and was very unimpressed and hadn't bothered to go again or to Aldi but I have changed my mind now (if Penny is reading this then I know you told me so!!).  I got some very nice New Zealand Sauvignon Blanc for £5.69 a bottle.  In fact I bought so much (that's not wine I hasten to add) I had to ring Richard and ask him to bring the shopping trolley over.  I did feel better when I got back to the boat but I had felt such a failure with the postcode fiasco.

Since arriving her we have heard that New Islington Marina is not a good place to go and that someone had a bike stolen from the roof of their boat here.  We have had no problems here whatsoever.  Ben, the warden, couldn't have been more helpful and, yes, there have been people wandering around but no more than we had in Castlefields.  As far as having things stolen from your roof that can happen anywhere, it was just a shame that it happened to someone here which may well cloud the opinions of others.

My photos today are all of New Islington Marina taken by Margaret Merridale from NB Huffler on Thursday as the weather today was not conducive to photography.