We arrived back on Mary H on Thursday early evening.  We opened the doors and the heat hit us – we opened every window but everything was really hot.  We moved the boat up to the services and unloaded the car – the plants survived their 500 mile round journey and looked really lovely at home.  We then moved across the canal and moored outside The Aspley, a pub restaurant, sorted out the boat and then availed ourselves of their fayre.  We we sat outside watching the boat (which meant we didn’t have to shut the boat up) and had a very good meal.


On Friday Richard took the car down to Barby Moorings which will be Mary H’s new home in the winter.  Penny and Jim met him there and brought him back to Huddersfield.  Meanwhile Muffin and I fried in the boat – it got up to 32 degrees at one stage though there was a cool breeze blowing up the canal at times.  The travellers arrived for a late lunch then Penny and I hit Sainsburys – it was nice and cool in there!  Penny left Jim with us and drove over to Crewe to stay with our cousin for the weekend.


We were up at 7am this morning and ready to leave just after 9am - we wanted to get a head start before it got too hot.  We weren’t too sure how far we would get so just headed off into the unknown!  We had heard some real horror stories about the Huddersfield Narrow Canal – would they turn out to be true!


The University surrounds the canal as it winds its way out of Huddersfield.  However the buildings are not what you would expect as many of the old mills have been converted into student accommodation and faculty buildings though there are a few more modern additions.


A lot of the first part of the canal has been rebuilt so you get the mixture of the new and the old – in places it is rather like a whole new canal. 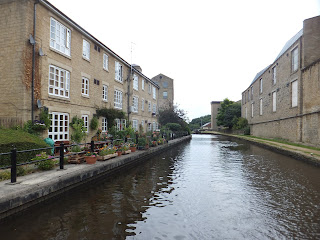 As you leave Huddersfield the old mills still surround the canal – some derelict, some converted for new industry and some for flats.  Milnsbridge is quite pretty with a combination of old mills and new flats.  Next stop is Linthwaite though the canal passes a fair distance away but the valley is dominated by Titanic Mill which was opened in 1912 and closed sixty three years later – it is now flats and a health spa though I really don’t think the balconies look right.


We arrived in Slaithwaite (pronounced Slaw-it) about 4.30pm having followed a single hander for 8 or 9 locks – we did try to help him as much as we could but it really did hold us up.  As we went through the last lock of the day, number 21, there were four visitor’s moorings but they were all taken – so what to do!  The single hander moored up close to the services and we breasted up alongside – there was nothing else we could do.  We had planned to have a barbecue but it wasn’t possible so it was a trip to the fish and chip shop.