We made the short trip to Bollington this morning and moored up on the aqueduct in time for lunch.  The aqueduct is, apparently, Lord Vernon’s Wharf – so I got it wrong yesterday!  We needed a small amount of shopping so wandered off to try and find the shops.  On asking a local where the shops were he told us to go down the path and through the hole in the wall – I wondered what he meant but I think the photo explains it! 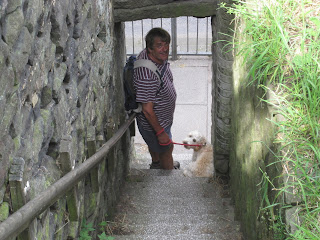 The shops weren’t really up to much though we did find a nice delicatessen where I got some lovely ham.  We walked back to the boat via Clarence Mill and had an ice cream.

﻿
Clarence Mill is an enormous stone building which dates from 1831 and has been extended several times since. It was built, like the other mills in Bollington, to spin cotton. The raw cotton was brought from Liverpool docks up the River Irwell to Manchester then via the Rochdale, Ashton, Peak Forest and Macclesfield canals. The cotton thread was then sent to other mills in Lancashire to be woven into finished cloth. The Waterhouse Mill (now demolished) was said to spin the finest (thinnest) cotton in the world and it was sought after by lace makers everywhere including Nottingham and Brussels.  Both Clarence and Adelphi Mills are now home to thriving businesses.


Bollington was home to the biggest water wheel in England and only second in Britain to the Laxey wheel in the Isle of Man. The wheel powered huge mills for the production of cotton.


Richard wasn’t very impressed with Bollington so decided to move on (ants in your pants or what??)  I was quite happy where I was but when your home moves on you move with it!!  Richard had visions of finding somewhere nice and quiet but needless to say, he didn’t find anywhere and we ended up going through Macclesfield to Gurnett Aqueduct where there are some very nice moorings.


There are a number of change line bridges, sometimes known as a snake bridge along this part of the canal. This is the point where the towing path moves over to the other side of the canal and the objective of the bridge is to enable the horse to cross over without having to untie it from the boat.  This is very common but the bridges along the Macclesfield are really unusual and lovely.
We had the choice of two pubs to eat in tonight, The Olde Kings Head and Sutton Hall.  On checking them both out on the internet we chose The Olde Kings Head as they were quite happy to have dogs inside.   We had a very good meal though I did feel that the desserts let them down.

Posted by Linda Gifford-Hull at 12:46