Richard said last night that we needed to wake up at 7.30am as we had to move to the visitor’s moorings to have our fuel polished.  I woke up, looked at the clock and it was spot on 7.30am!!  Richard was still snoring quietly!

We moved up and Peter Jones from Diesel Bug Removal arrived spot on time and gave us a good clean out.  Richard has been using Marine 16 to keep the diesel bug at bay but Gloucester Pilots really recommend that it is polished as there have been quite a few instances of narrow boats breaking down on the Severn as their fuel started to be tossed around and all the nasties got into the engine.  Ours was pretty clean just a bit of rubbish at the bottom on the tank, no diesel bug and very little water.

We wanted water but there were two boats on the point.  One on the point and one using the hose slightly further back to wash her boat.  The people on the point were using the showers at the Cotswold Canals Trust Visitor Centre and didn’t want to move until they were ready, fortunately the error of their ways moved and the other lady removed her hose!

We wanted to go and see the Purton Wrecks so pulled over just the other side of the Purton bridges.  While we were having lunch Muffin decided that he couldn’t wait for us so took himself off to see the wrecks on his own – hmmm I have never seen him quite so muddy!  The next visit to the wrecks was much better organised and no-one came back muddy!

The narrow bank between the canal and the River Severn to the north of the Severn Railway Bridge has long been used as a graveyard for old barges, with the aim of protecting the bank from erosion by the strong currents in the river.  The first barges were dumped on the bank in 1909 when it was realised that a new channel was developing near to the shore, and further craft were added at intervals up to the early 1970s. Each vessel was taken out of Sharpness Dock on a high spring tide, towed by a tug towards the shore and released so that it charged up the bank as far as possible. Then holes were knocked in the hull to allow subsequent tides to deposit silt inside.  As a result of the barges being dumped, the ground level has built up over the years, and some of the later arrivals are lying on the top of earlier ones. Careful research by Paul Barnett has identified the remains of over 30 wooden vessels protruding above the present surface, but many are rather obscured by long grass which is no longer grazed and others have been damaged by people recovering metal fastenings or by vandals.  As well as the wooden barges, 6 concrete barges are on the bank nearby, and 18 steel barges and lighters may be seen protecting the sea wall between the Severn Railway Bridge and the Old Entrance at Sharpness. There formerly was one more concrete barge on the bank, but that was rescued by staff and Friends of the National Waterways Museum in 1990. 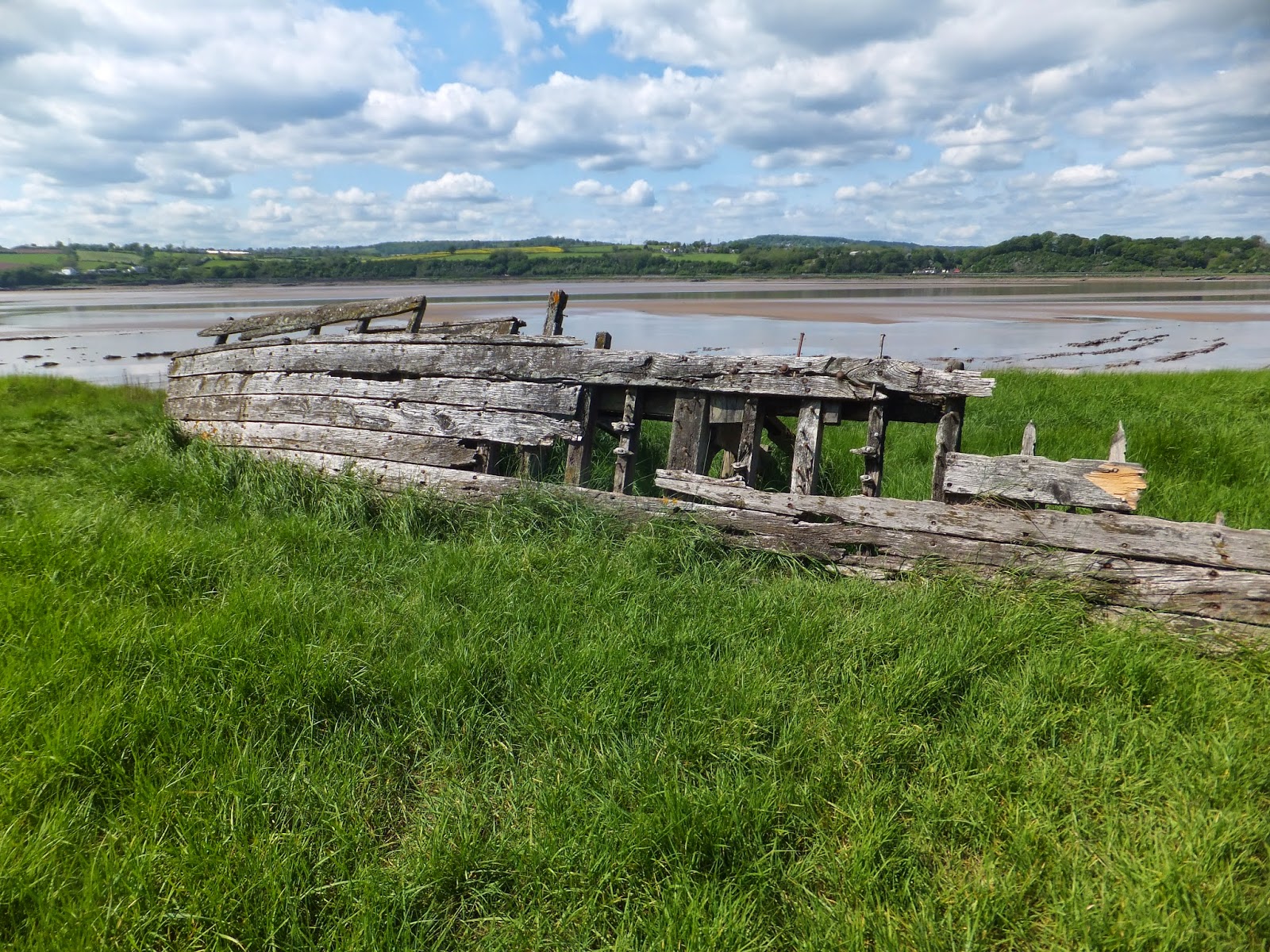 It wasn’t the best of things for me to do with my ankle but I didn’t want to miss seeing the wrecks.  I got back to the boat and sat with my foot up until the throbbing subsided L

I have already had one rant about boats moored on water points but this one has to take the biscuit!  In case you can’t see it is actually tied to the post with the tap in it.  The boat is all shut up and looks deserted. 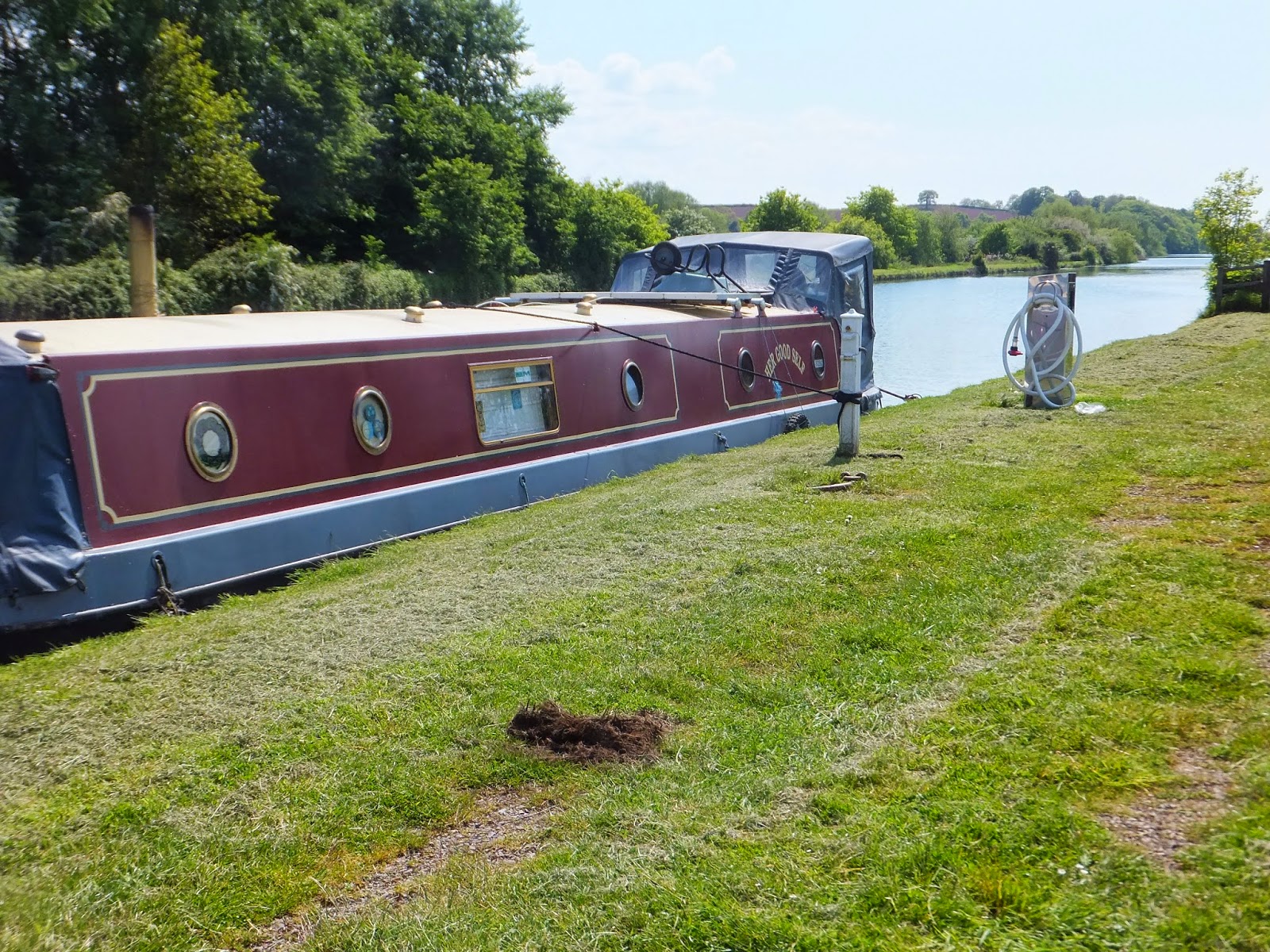 We then moved down the canal to Sharpness.  We went past the remains of a swing bridge which once carried a railway over the canal and the River Severn.  It opened in 1879 and had 21 fixed arches and a moveable arch.  In October 1960 on a foggy evening two petrol barges missed the entrance to Sharpness and collided with the bridge, demolishing one of the piers and bringing two of the girder spans down on themselves.  Their cargoes ignited and the blaze was worsened by the severing of a gas main on the bridge itself.
We had a look at where we have to go tomorrow - it all looks rather grotty but I know it will be lovely once we are out of the lock.

Posted by Linda Gifford-Hull at 08:01