I tried ringing C&RT about 10am but they were very unhelpful and with pushing the receptionist I got through to someone in an office but was as equally unhelpful saying it would be tomorrow.  15 minutes later the people from the boat behind us knocked and said the gate was working!!  Honestly – why couldn’t I just have spoken to someone on the K & A as I asked, instead of someone in an office who didn’t know anything.  Of course we had the car here so Richard donned his wet weather gear (yes it was still raining) and went to take the car to Newbury.
We finally got away and fought our way through the boats that were still moored there.  The rain turned to drizzle and finally stopped. 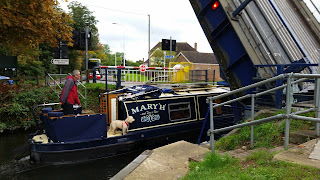 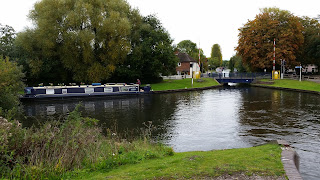 We had hoped to get water at Aldermaston but there was a boat on the water point as there so often is there.  Under Aldermaston Lift Bridge, which I always like doing as I just love stopping the traffic!  Richard went to use the sani-station while I did the lock.  Only the sani-station is now all shut up – that means nothing between Tyle Mill and Kintbury as far we can see.  Aldermaston Lock is nice and easy to use now since it’s renovation during the winter.  We went to see it while it was empty as they had an “open day”.  It was very interesting to see just how deep it is and it seemed quite strange to think that only a few months ago we were at the bottom of the lock! 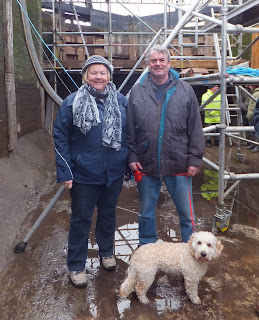 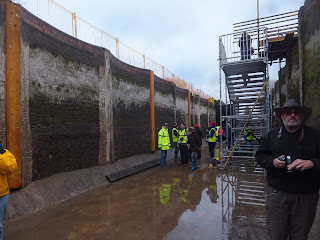 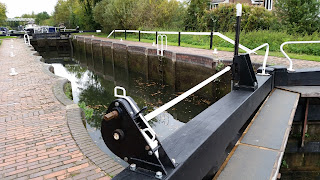 As we approached Woolhampton we noticed a hire boat across the river.  They had done the ill-advised thing of someone jumping off at the front and trying to hold the boat with just a bow line.  There is always a flow just there (though if wasn’t bad today) and the stern had just gone round.  Mary H came to the rescue and gently pushed the hire boat round until they were able to continue under their own steam.  We, of course, got through faultlessly! 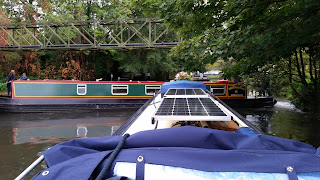 We moored up above the lock and had a quiet afternoon before going to the Rowbarge for our “last summer dinner”.  It was a lovely meal though their menu, I don’t think, is very inspiring.