We needed to be in Abingdon today which was a four-hour trip and to hopefully find a space there we needed to be away by 9am.  I woke up about 7am which is unusual for me, Muffin then woke up which then woke Richard up!!  We were having our tea in bed when the rain started but that heavy as it wasn’t making a noise on the roof.  Richard switched on Breakfast Time and we discovered that there had been terrible storms overnight and that Newbury and Didcot railway station were closed due to flooding.  We weren’t very far from there so were very lucky with the rain.

We left at 9.10am in the dry thank goodness.  Both Godstow and Osney Locks were manned which we weren’t expecting – I wonder if it’s because it is Friday and they are expecting weekenders to come out. 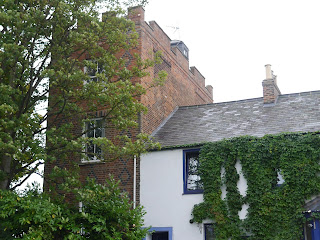 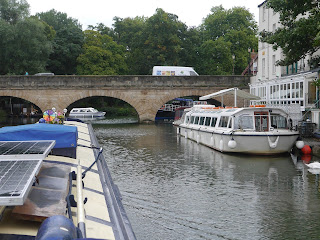 The Head of the River pub has got a lovely floral display – its just such a shame that the building looks as if it has seen better days. 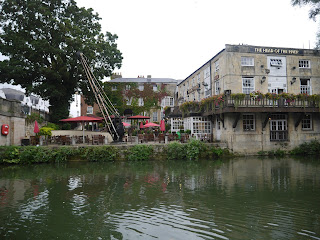 Down through Oxford where it was spitting with rain.  I was quite surprised when we reached Iffley Lock as I had completely forgotten about it!  It started to rain again as we approached Sandford Lock so Richard pulled over and we sat it out.  I do like these flats and houses below Sandford Lock – I reckon I could retire here! 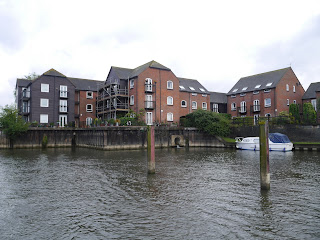 We stopped to use the services above Abingdon Lock then went through the lock and searched for a mooring spot.  There was nowhere on the field side but plenty of room of the park side so we moored there.  The trouble with the park side is that there is a No Dogs policy but there isn’t a soul in the park so we hoped we would be OK. Of course when the schools turned out the park was full of secondary kids – their game seemed to be to fill water bottles and soak each other!

I walked to Waitrose to get some milk – that is the up side of being on the park side of the river as the town isn’t far away.

Look at the narrow boat in this photo – it looks like a mirror! 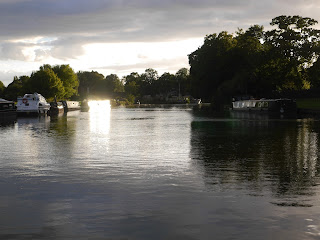