We woke up in Germany with Penny calling over the balcony that we were stuck!  There had been a tug pushing us but in fact it was so windy that the ship needed to be pushed against the jetty to tie up.  We were at a funny angle though.

We were having a day doing our own thing.  The trip up to Berlin was a 2½ hour drive and we didn’t fancy that.  We will do Berlin on a city break sometime. 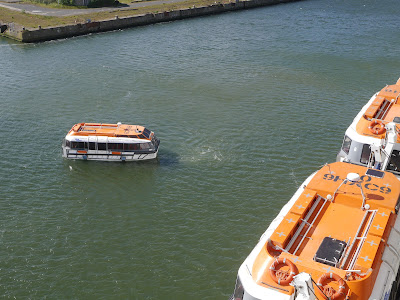 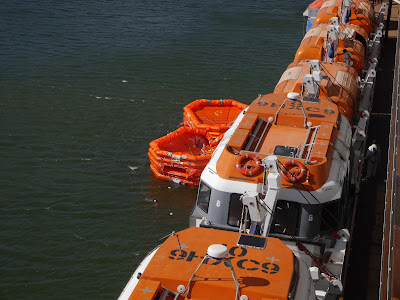 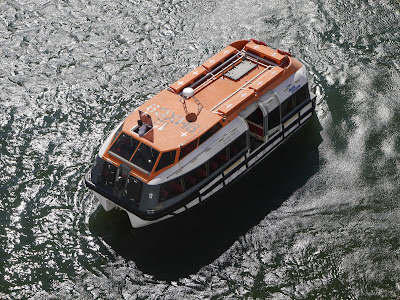 We watched life boats being launched and wondered what was going on.  Apparently the crew life rafts were being replaced today so the old one were chucked into the water and the crew then had to jump down a blue shute with their lifejackets on into the life raft! 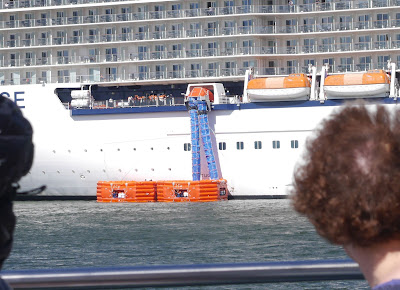 We disembarked and wandered off with no real intentions.  We thought we might like to go to Rostok.  We found a ferry/trip boat and got on and had a nice, but windy, trip up to Rostok. 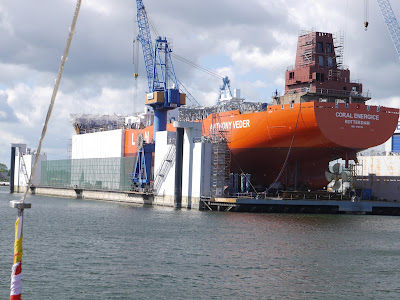 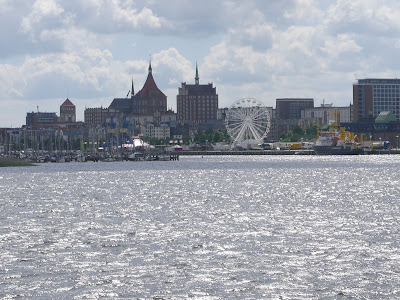 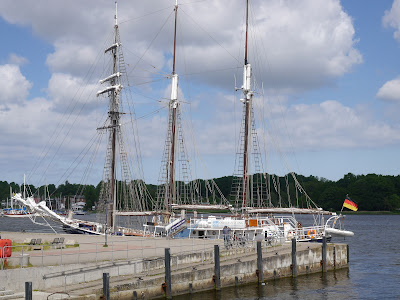 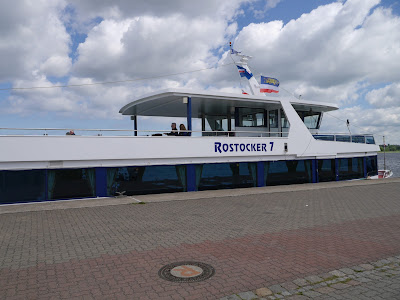 We found a tourist information shop not far from where we got off the ferry and got a map – it always helps!  We passed this intriguing waterfall …. 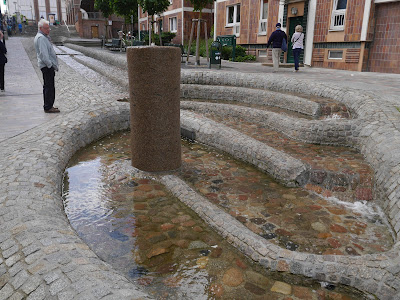 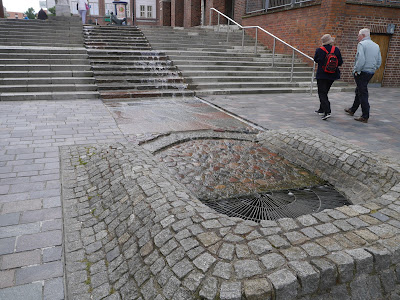 … and then stopped for coffee – only I didn’t have coffee! 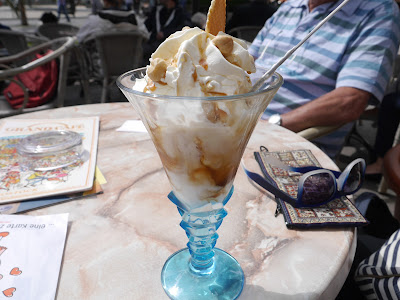 In the early 1930s, the Nazi Party began to gain among Rostock's voters, many of whom had suffered economic hardship during the 1920s. In elections in the summer 1932, when the Nazis achieved their greatest national showing in a free election of 37.3 percent, they polled 40.3 percent in Rostock. A year later, after the Nazi seizure of power and the suppression of other political parties, the Rostock city council (Stadtrat) was composed entirely of Nazis. In the so-called "Crystal Night" Kristallnacht of Nov. 10, 1938, the Jewish synagogue in Rostock's Augustenstrsse was destroyed by arson and dozens of Jews were beaten and imprisoned.  During World War II, Rostock was subjected to repeated and increasingly heavy bombing attacks, especially by the British Royal Air Force. After the war, the city—now in the German Democratic Republic—became East Germany's largest seaport, and the now state-owned shipyards in the district of Warnemünde were expanded. 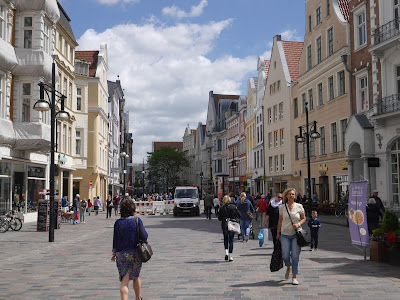 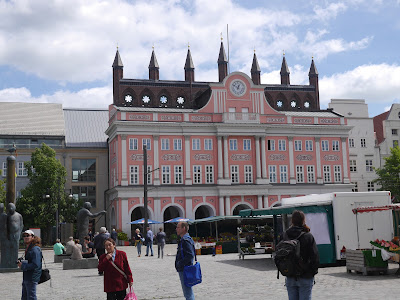 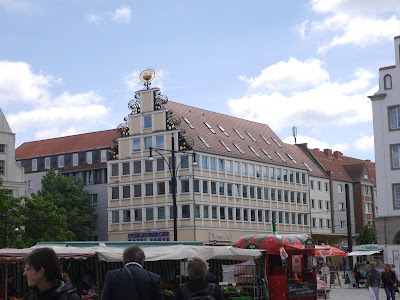 We walked down the main street, where everything looked so clean and nice, and into the market square.  We found somewhere for lunch on a table next to our ladies from the dining room onboard.  We had tarte which looked more like pizza. 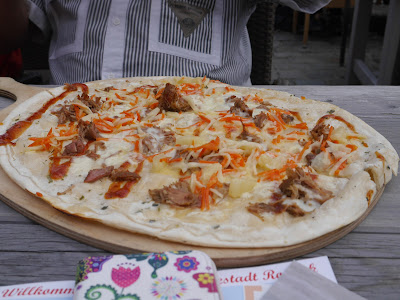 After lunch we were going to go to see a Church but suddenly my leg started to hurt again.  I hadn’t had any trouble since taking the Naproxen that the ship’s doctor gave me.  Penny and Jim continued on to the Church while Richard and I made our way to the railway station.  This entailed working out how the tram system worked and which one to get!  We did it perfectly 😊  Then we had to work out the platforms at the station – it was really weird.  We got the train we wanted and ended up in Warnemunde – result!  As we came out of the station we saw the pretty little town so had a walk round. 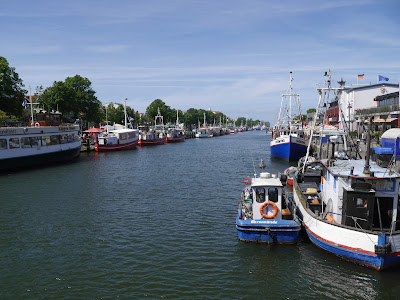 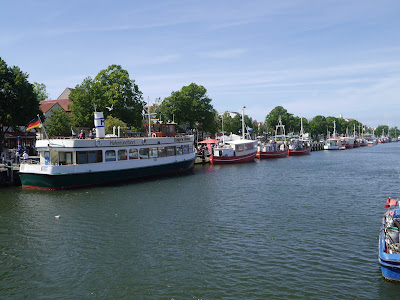 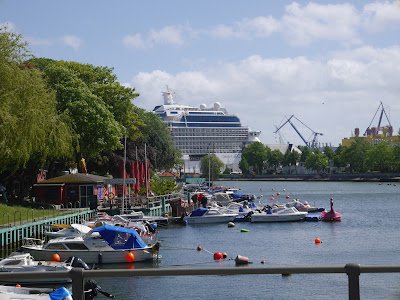 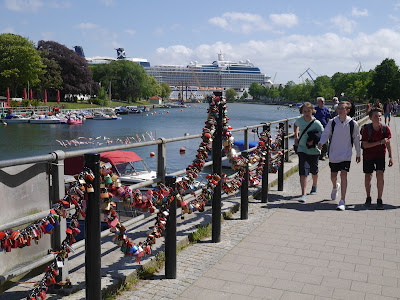 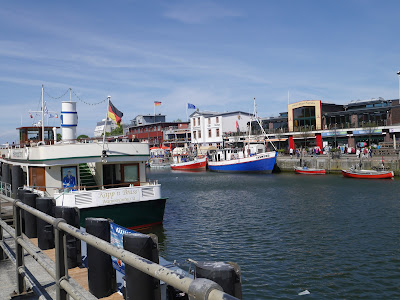 I wished in a way that we had stayed in Warnemunde for the day.  Being a centre of maritime traffic, the district of Warnemünde comprises numerous navigational aids, the oldest being the lighthouse, built in 1897, and still currently in use. In the summer, the tower, approximately 121 feet high, allows visitors to enjoy an impressive view over the Baltic Sea and the northern districts of Rostock. Warnemünde's other famous landmark, the nearby Teepott (Teapot in German) with its Hyparschale-curved roof, is an interesting living example of East German architecture. Built in Bauhausstile and opened for the first time in 1926, it burned down at the end of World War II. Rebuilt in the 1960s with a curved roof and renovated in 2002, it today houses various restaurants. Warnemünde's large, sandy beaches are the broadest on the German Baltic Sea coast and stretch out over a length of 1.9 miles.  We walked as far as we could along the pier and then returned to the ship. 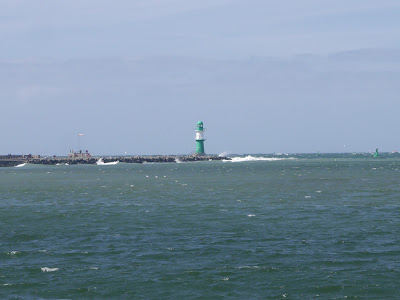 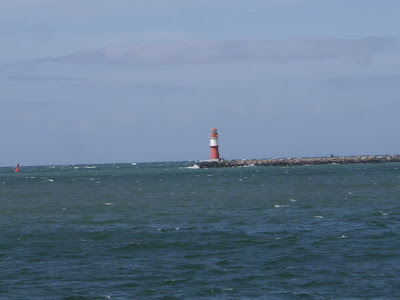 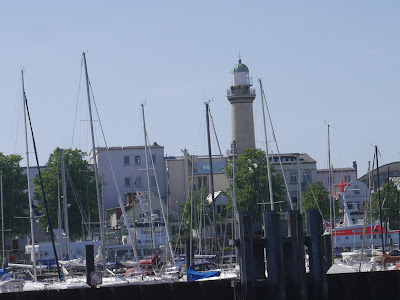 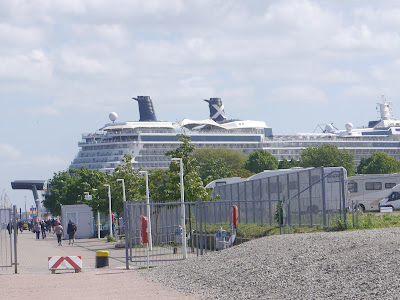 Back on the ship we had a communal tea and made our final cruise decision.  Canada and North America and in Concierge Class!

After dinner we went back to the Future Cruise shop and booked our cruise.  Going Concierge we got an extra perk and decided on a further $300 on-board spend.  It was then off to the bar for sparkling wine to celebrate.

We went up on deck to watch the sail away but it was quite dark.  I put a comment on Facebook and someone replied to say that she lives in Warnemunde and was watching us sailing away.  This is her photo! 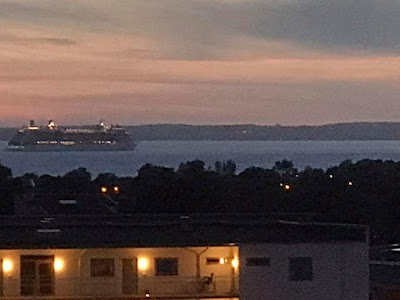 “A rough day at sea is better than any day in the office” Nautical saying
Posted by Linda Gifford-Hull at 09:47