Heartbeat of the Operations.

Our third morning of waking up onboard and the second in the middle of nowhere!  It’s really strange to open the curtains and see nothing but sea.  I am quite used to waking up on a boat but I can always see the other side of the canal!

This morning we had a trip round the kitchens – the heartbeat of the operations.  It started off with a Q & A session with the Executive Chef, Paul Carroll.  Paul has worked with Marcus Wareing and Gordon Ramsey before joining Eclipse.  I found the session very interesting and fascinating.

Alongside Paul are 250 cooks, chefs and cleaners working 24/7.  The brigade is managed by a team of 3 Executive Sous-Chefs and 4 Sous-Chefs.

On an average day at sea 16,000 dishes are served up.  This is a summary of some consumption figures based on an average 14 day cruise. 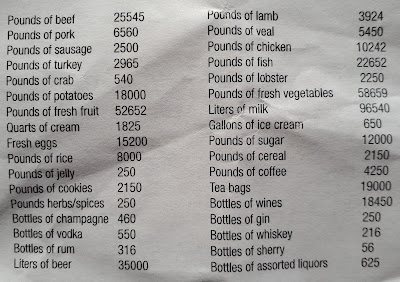 The tour of the kitchen wasn’t the best as we had a quiet speaking chef/guide and there was so much noise going on that I couldn’t hear a word. 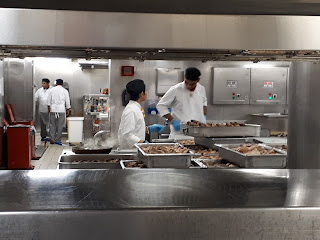 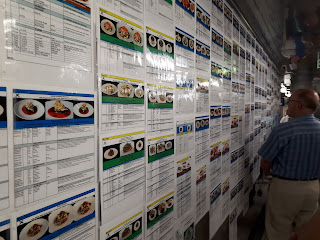 It was then on to the Theatre for another talk by Emile Baladi – this time on St. Petersburg.  This gave us a real insight into the city.

Here is a brief history of the city.
Swedish colonists built Nyenskans, a fortress, at the mouth of the Neva River in 1611.
On May 12th 1703, during the Great Northern War, Peter the Great captured Nyenskans and soon replaced the fortress.
On May 27th he laid down the Peter and Paul Fortress, which became the first brick and stone building of the new city.
St Petersburg was built by Swedish prisoners from the Great Northern War (1700-1721).
It became the capital of the Russian Empire for more than two hundred years (1712–1728, 1732–1918).
The city was renamed Petrograd in 1914, at the beginning of World War I, because it sounded less German, was then named Leningrad after the death of Vladimir Lenin in 1924, and again became St. Petersburg in 1991 when the Soviet Union collapsed.
There are 7 different types of architecture in St. Petersburg.  The Russians copied them all.
Baroque
Rococo
Neo Classical
Russian
Romanticist
Stalinist
Functional – which is just plain ugly!
One last fact, but about the whole of Russia – they lost over 20 million people during World War II.

After the overdose of information we had a quiet afternoon and dinner and then went to the show.  It was Spencer Robson – a vocal impressionist.  He was excellent and we all enjoyed the show.

I took these photos from our balcony when we got back to our cabin. 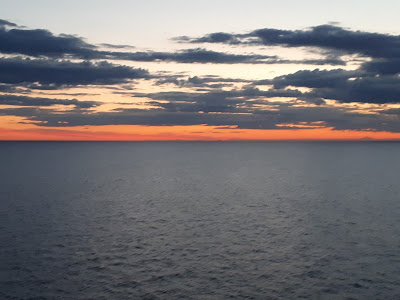 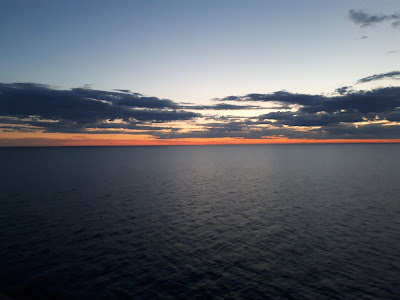 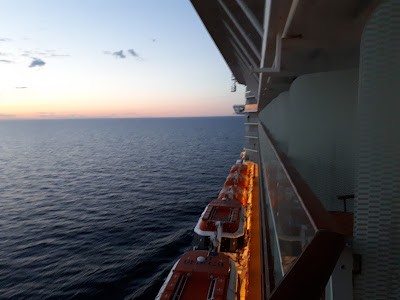 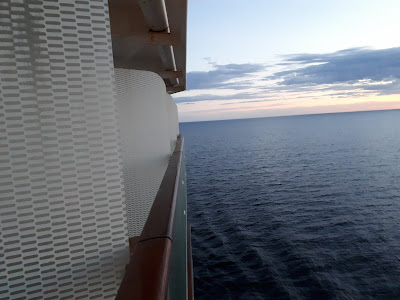 “There is nothing more beautiful than the way that the ocean refuses to stop kissing the shoreline, no matter how many times it is sent away” Sarah Kay
Posted by Linda Gifford-Hull at 19:14