Camaret was our destination today.  We parked the car and walked round the harbour.

Guess what? It was lunchtime and guess what again? We had crepes!!  These were followed by the usual puddings and these were Richard’s and mine.

There used to be 94 working fishing boWe walked out to the end of the harbour wall and came across the Vauban Tower which is surrounded by a moat. The tower itself is an octagonal 17th century defensive tower built in red brick.  The walls are pierced by narrow slits through which the troops could fire - more reminiscent of medieval castles than modern warfare techniques. Sadly the tower is usually open to the public but is closed at present for renovations.

Next to the tower is the 17th century Chapel of Notre-Dame-of-Rocamadour.  It is built from yellow stone which is unusual in Brittany as most buildings are constructed in grey granite.  The top of the steeple is missing - it was knocked off by a cannon fired by the English in a battle in 1694.

This sculpture sits just outside the chapel.

We have noticed that most French harbours have their boat graveyard and Camaret is no different.  There must have been about 10 of them.

We also found a section of the beach where stone towers had been made.

Once upon a time there were 94 fishing boats operating out of Camaret but now there is barely a handful.  They used to fish for sardines but as we know from Douaranenez that industry declined some years ago.  They also fished for langoustines but that too declined and finally came to an end in the 1990s. Richard saw a sign saying that Camaret had the first lobster pot.
From Camaret we drove to Cap de la Chevre but it was so busy there that we didn't stay.  We then had another one of our unproductive deviation expeditions!  We were trying to get to Morgat but it just wasn't going to happen!  Each time we seemed to be getting a little closer another sign took us away again. 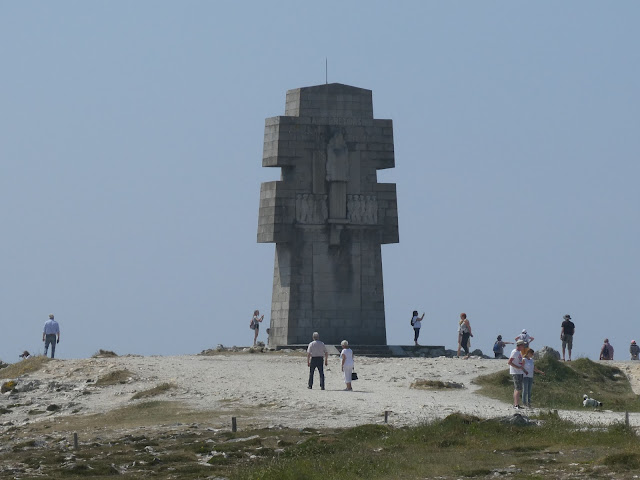 Muffin and Freddie have been sharing the space on the back seat whilst we have been driving around.  Muffin does like to rest his chin on things - including Freddie!!! 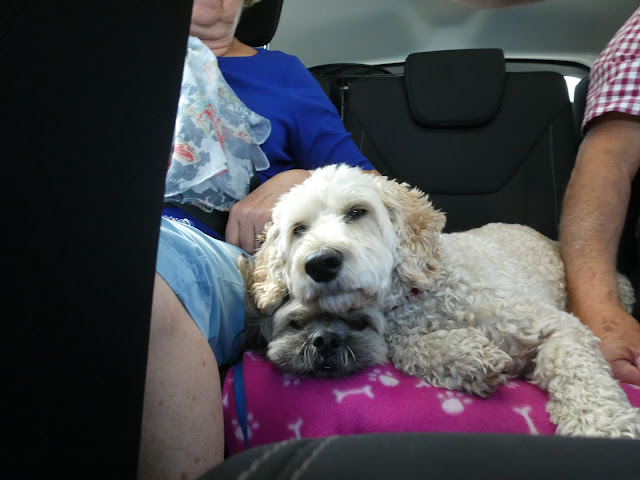