The weather has finally broken here.  We had quite a strong wind across the marina during the night making the ropes creak like mad.  Richard (as he was first up, as usual) didn’t think it had rained during the night but we did have a couple of short showers early morning.

You have to be of a certain age to appreciate this photo,
but I love the suit of armour guarding the sign!

Now it has cooled down it is time to do some boatwork!  (I hasten to add that I had done some but not a lot!)  The place is dusty, and the floors covered in grass which Muffin has brought in – mainly on his tail!  Also, down on the town moorings we were inundated with little seeds which blew in all the open windows.

Richard’s son, James, arrived just before lunch and then they set off to take James’s car to Dunchurch Pools and bring our car back so that I can go down to Devon tomorrow.

Before Richard and James went to Dunchurch they took me to the Abbey as I had bought some coins for my grandson yesterday but when I got back to the boat I noticed that, even though the receipt showed that I had paid for 2 sets, I had, in fact, only got one.  I felt really bad as their stock sheet showed that one had been sold but they were very nice about it and gave me the missing coins. 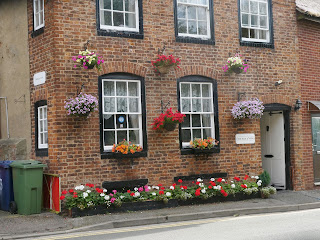 I took this photo yesterday.
Tewkesbury is a blaze of colour with local firms sponsoring just one or two tubs

In the afternoon I was doing a bit more cleaning when the rain started to pour down.  I didn’t think any more about it until I realised that Muffin was missing.  I found him on the pontoon trying to get in the same way, I assume, that he got out.  The pram cover is up, and all the sides are in but somehow he had got out and couldn’t get back in again.  Muffin hates thunder and whether or not he thought he could hear some I don’t know but he must have panicked and fled and then realised he was better off on the boat!!

My daughter, Victoria, is known by the family as Toria.  This boat came into the marina this afternoon. 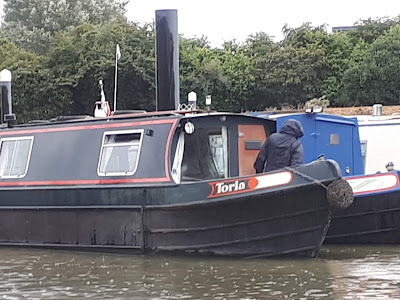 The “boys” didn’t get back until 6ish as they had been shopping too.  I was watching TV in our cabin so left Richard to put all his goodies away!  We ordered pizza from Dominos but went to get it rather than get it delivered – boy was it good!!

When we were in the Abbey yesterday we saw a “Cope Cabinet”.  I thought it was something worn by a Bishop but discovered that any member of the clergy can wear one.  If a Bishop wears one, he usually wears a mitre too.  The clasp, which is often highly ornamented, is called a morse.  The earliest mention of a cope was in 757!  The earliest post-Reformation prayer books of the Church of England contemplated the continued use of the cope, with the 1549 Prayer Book specifying that the priest at Holy Communion should wear "a vestment or cope". 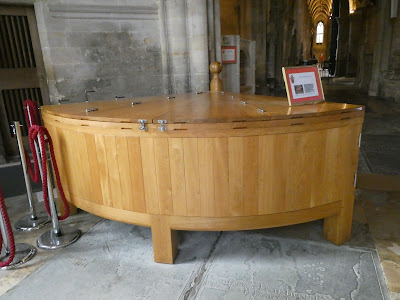 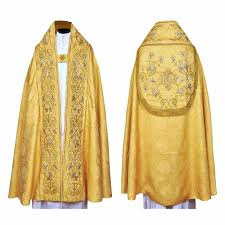 Posted by Linda Gifford-Hull at 09:39