Our two sea days before getting into Southampton were not the best.  Having had such amazing weather we spent the two days in either mist or fog.  We now know that the fog horn on Silhouette blasts out every 2 minutes and 3 seconds!  I would say that the fog horn was going for about 90% of the journey. 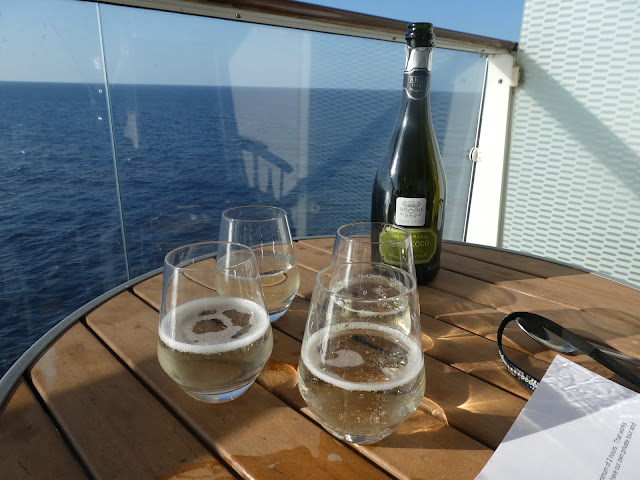 Needless to say this photo was not take on either Day 14 or 15!

We listened to the Captain's daily talk at 10am on Day 14 and when he said that it was going to get rough I quickly took a Stugeron!  However it wasn't really rough but there was a swell of a good 2 to 3 metres.  A swell is always worse for me - give me a proper rough day anytime!  Penny took one too and we were fine but there were people missing from dinner on both nights :-( 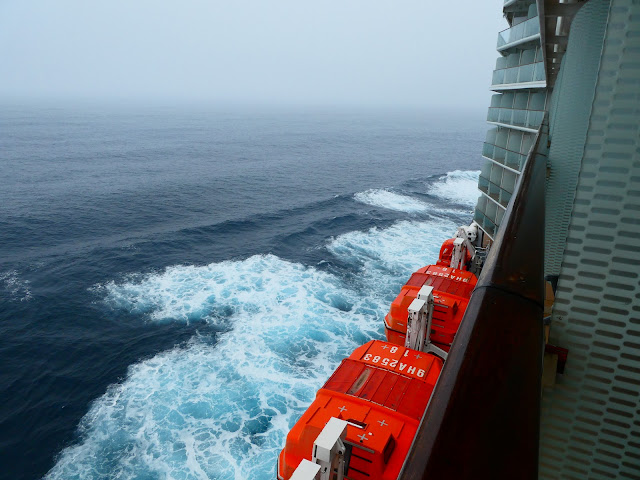 The Captain, George, gave a talk on Ships Navigation which was extremely interesting.  He also did a Q & A session.  Jim asked who sets down the rules for when and if a Pilot has go come onboard.  The answer was that the port does - sounds like a good way of making money to me!  Captain George also told us about the medivacs.  I always thought that the helicopter would land on the deck but decks today aren't big enough.  He said that he has an easy job - all he has to do is stay on the course given to him by the helicopter.  A wire links the helicopter to the ship so both have to stay on exactly the same course and the same speed.  ALL he has to do???  Sounds frightening to me!  The casualty is slid along the wire to the helicopter - I think I would need to be sedated for that!

Another question was - how long would it take to evacuate the ship - answer - 30 minutes! 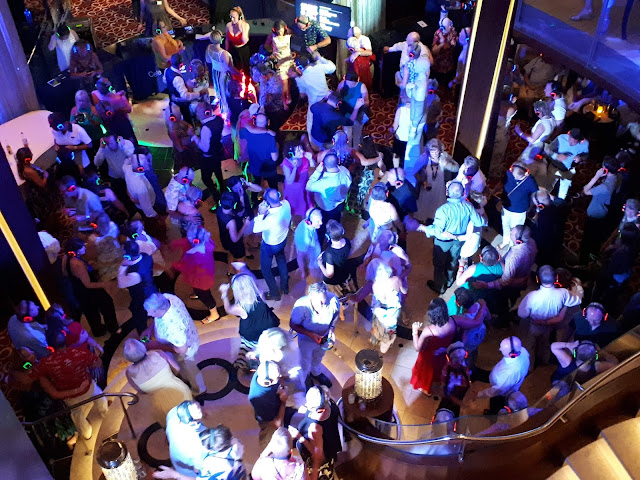 
On Day 14 we were able to sit out on our balconies albeit wrapped up in a blanket and we saw so many dolphins and even a big whale.  The dolphins seemed to want to show off to the ship and we saw four execute an amazing synchronised leap - we called them the Awesome Foursome!  Sadly all the dolphins were too quick to be photographed. 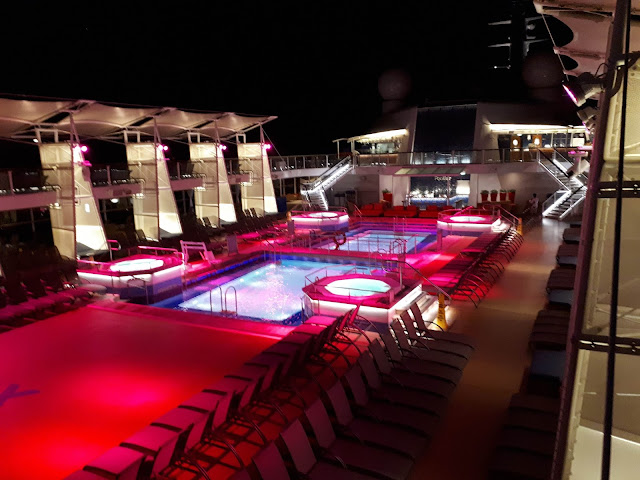 The ship is lovely and the crew amazing.  They work long hours but always have a smile and a greeting - you never pass one without them saying something.  Our cabin attendant, Ronald, was very attentive and had a laugh which will stay with me forever! 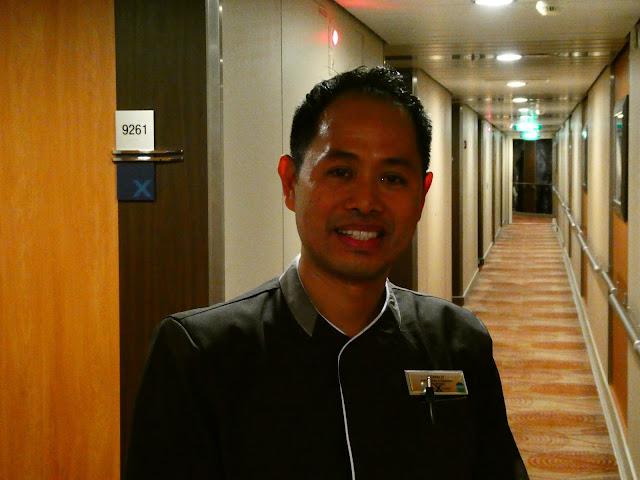 I bought a monkey in Gibraltar for Tobyn and I also took Mr. Moose with me.  Mr. Moose came from Stockholm last year and even though he belongs to Tobyn I thought he might like to go on another cruise - daft I know!  Each night, when we returned to our cabin, Ronald had put them in a different pose - but I think this is my favourite.  Those are chocolates on his hands! 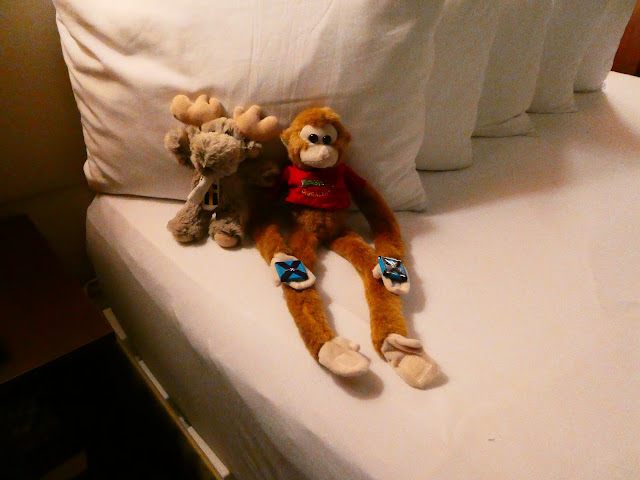 Our waiters were amazing and the food in the main dining room excellent.  We chose not to have a set dining time but were supposed to take pot luck however 95% of the time we had the same table and the same waiters. 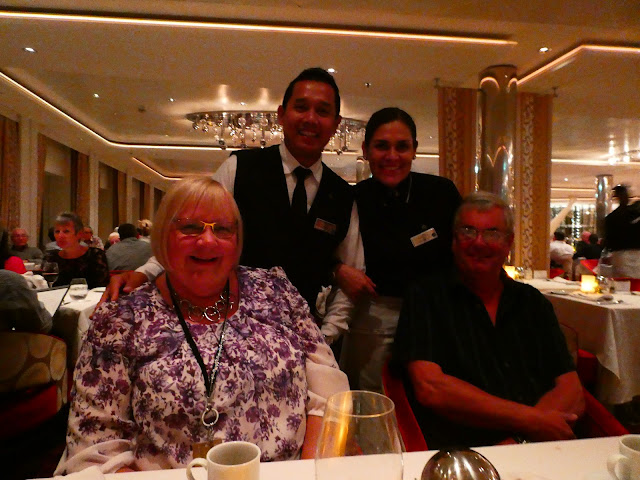 So would we go with Celebrity again?  You bet we would though we aren't next year as they don't do the itinerary that we want to do.  However, maybe for 2020!!

Here are a few facts about Celebrity and the Silhouette.

In 1989 the Chandris family introduced the first Celebrity Cruises ship.  The inspiration for the "X" logo came from the Greek alphabet, as X is the symbol for the Greek letter "chi" which is the first letter in the Greek spelling of Chandris.

For the techies amongst you here is some technical data.  Jump past it if you aren't techie minded but you might just find it interesting!


One last thing.  I took a couple of videos on the first night of Le Petit Chef however I couldn't seem to post them using the iPad so here they are