What a difference a day makes!  It was a much better day, though there were still a few light showers around.  The river seemed to be alive again and people were braving the, sometimes, very grey skies.  Richard did reckon that the river was up about 6” on yesterday.

We had no plans until my cousin, Simon, phoned and asked if we would like to meet up for lunch.  If it meant that I don’t have to cook, then I was up for it!!  He suggested a pub called The Tramway which was just across the park.

I mentioned the other day about Bidford having a large park, well Stratford has an even bigger one!  I hadn’t been across to the other side and was really surprised.  We can see this small funfair from the boat, so it was nice to see it close up.  It wasn’t until I looked at the photo later on that I noticed how black the sky was! 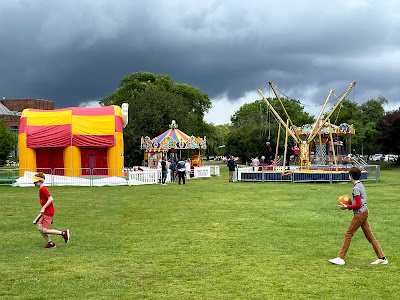 Also in the park is a miniature roadway for children to learn to ride their bikes.  What a brilliant idea. 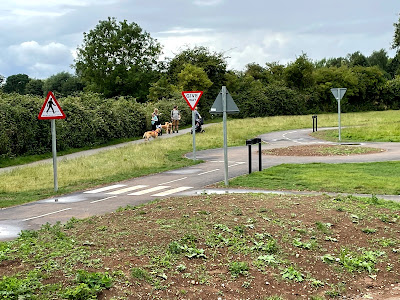 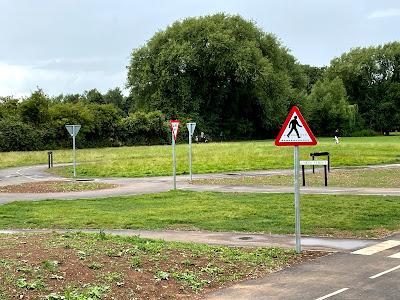 We went under the old tramway and up the road to the pub.  We sat outside and had a good meal with excellent company.  Two meals out in two days – I could get used to this!

We walked back a different way which was along the old tramway.  When we were in Stratford a couple of weeks ago, I mentioned about the tramway.  I wrote, the tramway was built in 1826 to carry a horse tramway from the Stratford Wharf to Moreton-in-Marsh.  It was originally intended to be extended to London, had a branch to Shipston-on-Stour. It was bought by the Oxford, Worcester and Wolverhampton Railway in 1847 and closed, except for the branch line, in 1881.  The tramway was intended to carry Black Country coal to the rural districts of southern Warwickshire and limestone and agricultural produce northwards. 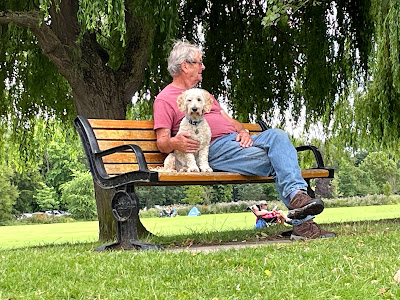 As we had eaten at lunchtime there was no need to cook tonight – yeay!!

Posted by Linda Gifford-Hull at 11:14