Thursday 26th May - Port Burwell Provincial Park to Burlington
We didn’t have to leave the site until 2pm so I said that I really needed to catch up on the blog as I was so far behind.  Even though I take notes it still seems to take a long time and when you have quite a few days to do it is even worse.
We also had washing to do as we didn’t know when we would get to a laundrette again.  We packed up the RV and drove to the first laundry on the site.  I put the washing and started to put $4 dollars in, the third one got stuck and try as we might the money wouldn’t budge.  We drove to the site office and they said they would send someone out.  We waited but no one came so took our washing to the next laundry area.  Washing in and four more dollar coins went it and the machine burst into life.  It was going to take 40 minutes.  While it was washing we went and emptied the grey and black water tanks and filled up the fresh.  Back to the laundry where the washing wasn’t finished.  Eventually it finished, it went into the drier and I put another $4 in – that’s a total of $11 for a load of washing!  The drier was going to take 80 minutes!!  They have, on average, been taking about 50 minutes.  We were by this time well and truly late leaving.  Richard had to take the electric cable back and wait while a couple were having a row with the poor guy in the office.  They had a huge RV and got to their pitch and found out that they didn’t fit!  Apparently they were moaning that the pitch had been booked since January and no one hold told them that they wouldn’t fit!  When you book a pitch there is a drop down menu that asks what sort of outfit you have and how long – I guess they ticked the wrong box!  At the end of the day the site was only about 5% full so really they had no worries, but they must have thought they did!
We started our drive to Burlington which is south of Toronto and on Lake Ontario.  We had met a lovely couple in Spain, Joanne and Steve, and they had very kindly offered to take us to Niagara Falls and also the use of their drive to park the RV.  We gradually left the countryside behind and could see the tower blocks of civilisation.  The traffic got heavier and heavier and I knew that Richard wasn’t enjoying the driving as he was huffing and puffing!  As I do the navigating it was my job to make sure he knew exactly where we were going to turn and where we weren’t going to turn – that seems to make it easier for him.  Words of encouragement helped too!
We arrived at Joanne and Steve’s about an hour late.  We had been determined not to be late as the last time we met them in Spain we got the time wrong and were 30 minutes late at the restaurant :-(  We hate being late and have done this to J & S twice now – sorry guys!
We sat in their garden for an hour or so before going out for a meal. We went to a restaurant called The Keg, a steak house.  I had a 14 ounce slab of prime rib, only because Steve did, and I managed to eat it all but couldn’t manage much else on my plate.  Steve only ate about half of his and took the rest home – cheat!  We then went for a drive around their area and saw some amazing houses.  $1m wasn’t in it, some of them must have been $5m+.  Joanne and I sat there picking out the ones we would like!
Back at the house we chatted for a bit before hitting the sack in the RV.
Friday 27th May - Burlington and visit to Niagara Falls
Steve had to go for a scan this morning which gave us chance to pack up the RV ready to return it the next day.  I thought it would be relatively easy but it wasn’t as there really wasn’t enough room.  Anyway I did as best as I could before we set off for Niagara Falls.
It was only about an hour’s drive and we were soon there.  I don’t think I realised how big the town of Niagara Falls would be, I imagined it to be a few houses around the Falls – what an idiot!!  The resort is huge with so many different attractions, I guess they had realised that millions of people visit the Falls so why not try and keep a lot of them there for a few days.  As we turned the corner all I could see was mist which was coming off the bottom of the falls, but then I saw the Falls though not much of them.  Having parked up we walked over the road and I was awe struck by the enormity and beauty of the Falls.  There are so many bits to see which seemed to change every minute or so.  I took so many photos which took an age to edit.  Richard and I decided not to go on the Maid of the Mist trip boat as everyone was getting soaked and blown around – I know, cowards!  Eventually I had to drag myself away as I could have stayed there all day! 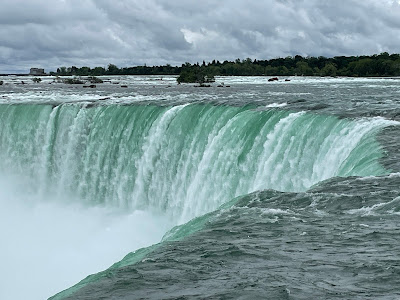 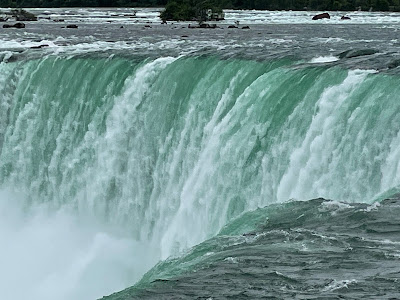 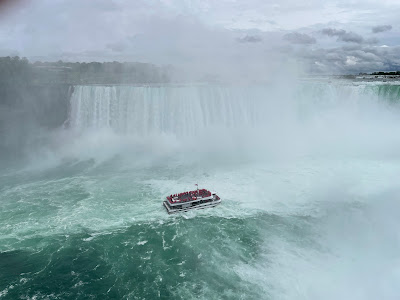 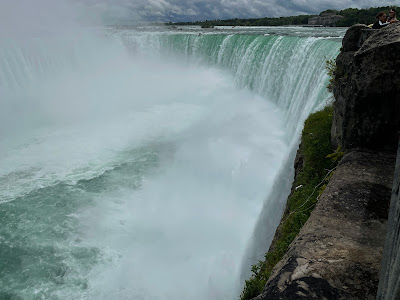 The name Niagara Falls is actualy the name of three waterfalls - the Horseshoe Falls, the American Falls and the Bridal Veil Falls. The Canadian side of Niagara Falls located between Goat Island and Table Rock is known as the Horseshoe Falls, it also has the highest flow rate and beauty. Studies and history of Niagara Falls indicate that thousands of years ago, the Falls were 11 km downstream from their current spot. Erosion was a major issue associated with the Canadian Falls. And the rate of average erosion of the Niagara Falls rose up to 1 metre per year until early 1950s. Thereafter the water diversions have spread out more evenly reducing the erosion in Niagara Falls. The Canadian Horseshoe Falls is also a great source of hydraulic power.  There are over 500 waterfalls in the world that are taller than Niagara Falls, but Niagara Falls is the biggest waterfalls in the world by the volume of water siphoned at an average of 750,000 gallons each second.
From the Falls we drove to Niagara on the Lake which is a very pretty town.  The drive there was passed even bigger houses than last night and a lovely park which seemed to stretch for miles and miles.  The area is known for its wineries and we could see the vines growing as we drove along.  The flower-filled, tree-lined old town features 19th-century buildings, mainly along Queen Street. 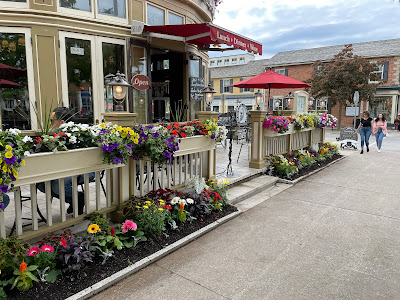 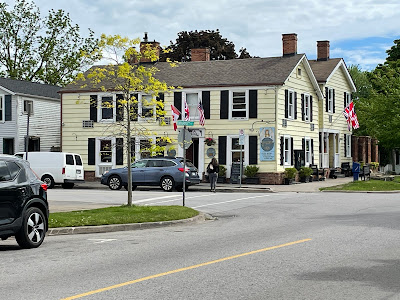 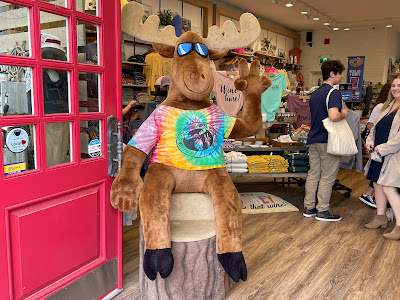 Near the river, 19th-century Fort George was built by the British to defend against American attacks, sadly we really didn’t have time to visit it.  In June 1812, the United States declared war on Britain, already locked in combat with Napoleon’s France. The resulting War of 1812 was fought largely on Canadian territory, especially along the Niagara frontier.  The Americans were superior in numbers but badly organized. First Nation People, including a Shawnee contingent led by Tecumseh, and Canadian militia units provided invaluable support to Canada’s garrison of professional soldiers. In December 1814, Britain and the United States signed the Treaty of Ghent and returned all captured territory.
We need sustenance and found a restaurant with outside tables that did lovely pizzas.  We then walked down one side of the street and back up the other looking into shops with me wanting to buy all sorts but not having room in our bags for anything   We did, however, buy some fantastic fudge, but I didn’t realise how heavy it was going to be.  All I’ve bought myself so far are fridge magnets!  We found a Christmas Shop which was like an Aladdin’s cave – it seemed to go on and on.  I bought a few bits in there, it’s become a bit of a tradition to have tree ornaments from overseas now. Next was the ice cream shop, such a choice and such a big serving!
We drove on trying to find Welland Canal which we had seen on our way to Niagara.  In the end Steve asked someone who gave us directions, but we seemed to drive round in a circle.  We gave up after that!
Back at the RV I did a bit more packing and almost finished it before going in for a small BBQ, we didn’t want much to eat.  We chattered on for ages before retiring to bed in Mokey I (the RV) for the last time.  We asked what sort of wild life they had, and right on cue, a chipmunk ran past us through the garden!
Thank you so much Joanne and Steve for your hospitality and driving us to Niagara.
Posted by Linda Gifford-Hull at 16:24