Monday 30th May
Today was Hoodoo day!  Joanne and Steve had told us that we should visit them and we are so glad we did.  They are amazing. 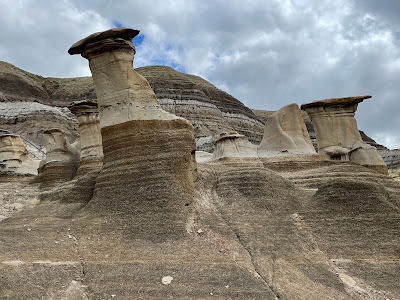 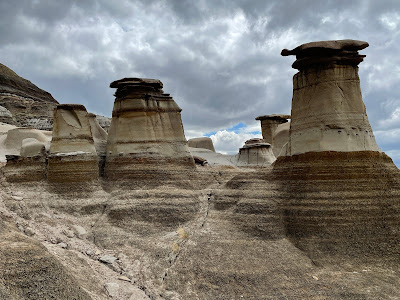 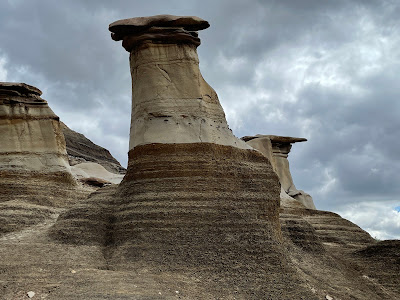 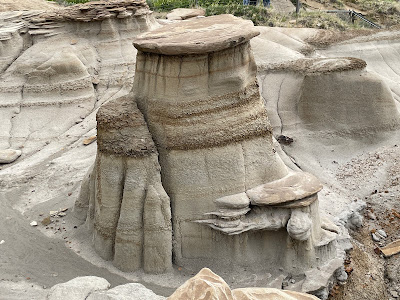 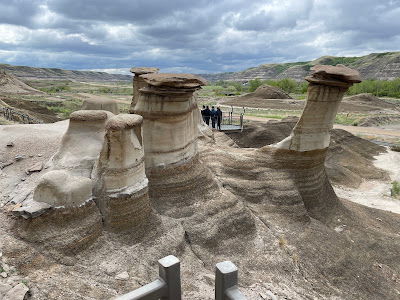 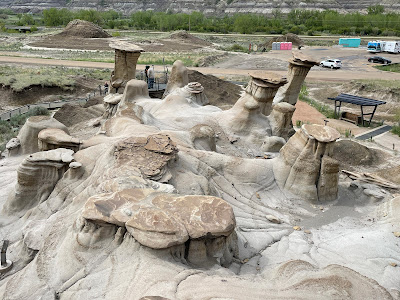 A hoodoo is a tall thin rock spire made of sandstone with a hard and dense rock sitting on top, like a hat. Or as the sign at the park describes them: “Eroded pillars of soft sandstone rock topped with a resilient cap.“. The hoodoos are formed over hundreds of years through erosion from freezing, frost, melt and wind. Over time, the sandstone erodes into long chimney-like formations that remain standing because the hard rock “hat” keeps it from completely eroding away.  The hard rock on the top of the hoodoos protects the soft layer of sandstone underneath from the elements creating the odd shape. But once they reach the stage of being the cute fairytale chimneys, they don’t last long! It is said that every 100 years, they lose 2 to 4 feet.
We left the Hoodoos and our road took us back towards Drumhella before turning south, but we took the opportunity to go a couple of miles further on to visit Walmart!  We had a double 12v adaptor, which I had brought with us, in the last van and I must have left it there.  We are using the sat nav and dashcam so needed one.
Back on our route we climbed up out of the valley and back onto the prairie, but this time there were a few hills to break up the monotony.  We saw lots of nodding donkeys which we assume are for oil though not many of them were nodding! 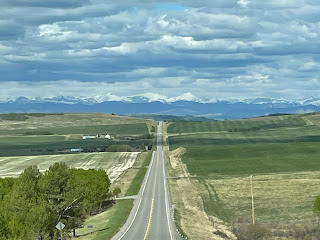 One of the things that we noticed was that the fields haven’t been ploughed yet, let alone seeded.  Back in Ontario all the fields are ploughed, seeded and beginning to get a green haze on them.
We then passed through Siksika First Nation territory. There are little enclaves of small houses which didn’t surprise me as it looked very similar to a Red Indian camp in the movies, but with houses instead of tepees.  All the houses were of a similar size, but were mostly of a different design.  Some of the houses have fences but most are out in the open. 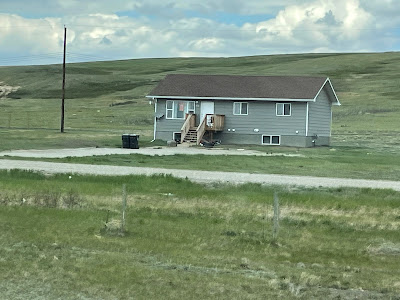 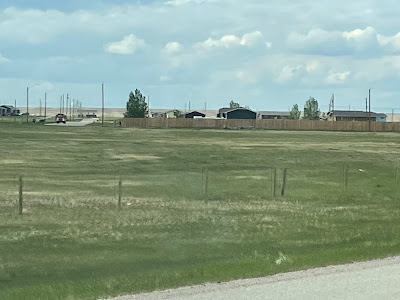 We were heading to High River next.  For those of you who don’t know the story behind our Canadian trip, I will explain.  During Covid, Richard and I binged watched a Canadian TV programme called Heartland.  It is set just south of Calgary in a fictional town called Hudson, which is in fact High River.  Heartland itself is a ranch and that is where nearly all the scenes are shot.  We both fell in love with the scenery, the plains leading onto the Rockies with their snow caps.  We had both wanted to go to Canada, but never really thought we would get there, but Heartland made us decide to go.  The first murmurings of a plan started in January 2021, deep in Covid time, but I started on a plan hoping that we would actually go.  Everything came together and we kept our fingers crossed not really knowing if we would actually get there until 24 hours before our scheduled flight time, thanks to the US rules of still needing a LFT test.
We were booked into the George Lane Memorial Campground for two nights.  I knew it was very close to the town but, in fact, we were in the town!  We found our site and went off for a walk to find Maggie’s Diner where a lot of Heartland filming takes place.  I thought it was just a fascia but looking through the windows we could see the actual set. 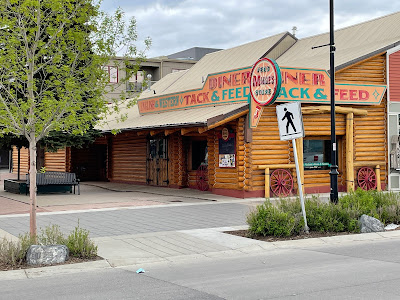 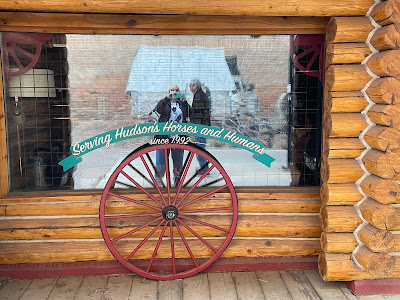 We went off to look for a liquor store and ended up going to a Chinese restaurant for our worst ever Chinese dinner.  It was horrendous, sadly.
On our way back to the RV I went into the office to ask about a laundrette and learned that there had been Heartland filming a couple of days before.  How annoying!


Tuesday 31st May
We were packing the RV up for moving and I managed to fall down the step between the bedroom and the dinette/kitchen area.  I so nearly hit my head but just ended up with a bruised elbow and a grazed side.  I also went down on my bad knee.
Our first port of call was to find the actual Heartland Ranch.  I had found it on Google Maps and, in fact, it was exactly in the place as I thought it would be.  It is a proper working ranch with big gates to keep out the Heartland fans!!  We were above the ranch, but we could still see the scenery that we had fallen in love with.  Next was the lovely wooden Church where all the characters get married.  It was a lovely Church set in a field or maybe it is a grass car park!  We had our lunch there before setting of to Bar U. 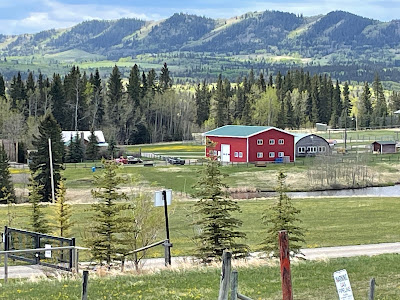 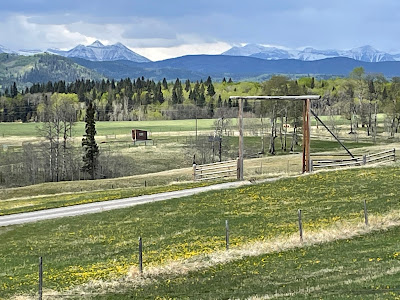 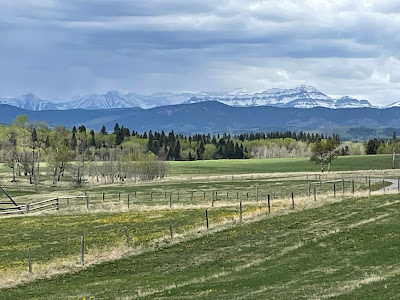 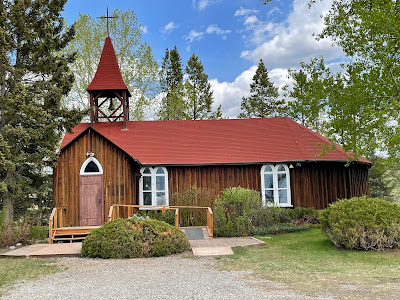 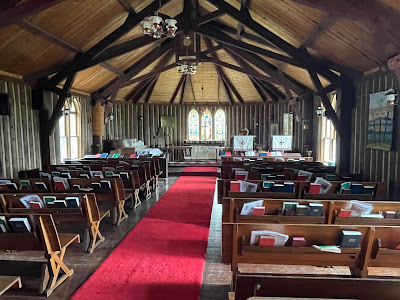 Bar U Ranch is a National Historic Site of Canada.  It was founded in 1881 and was successfully run for 70 years for cattle and at one stage Percheron horses.   Parks Canada bought the ranch in 1991 and have sympathetically restored the buildings.  We met an elderly cowboy who was in fact the saddler and gleaned some interesting information.  He told us to go and find Bruce who would give us more information and boy did he!  We came away with our minds spinning, and of course, have forgotten it all now. 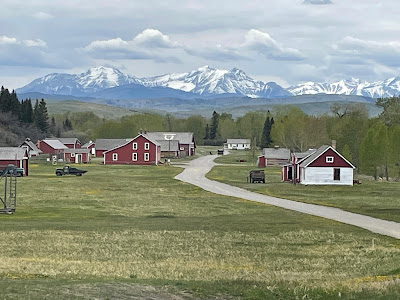 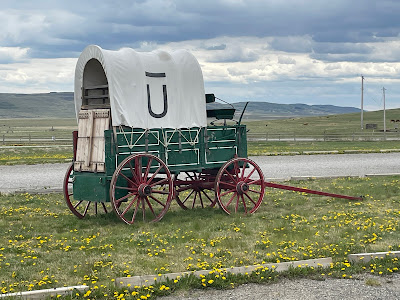 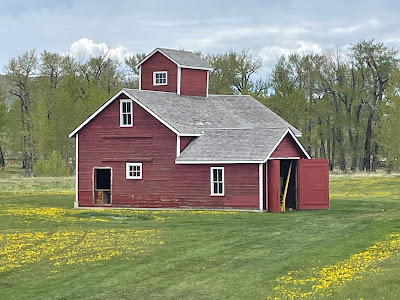 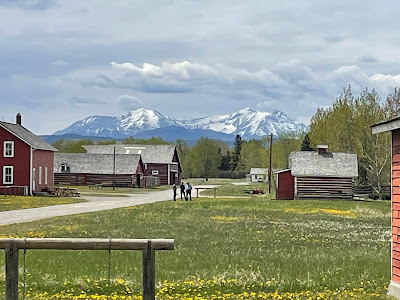 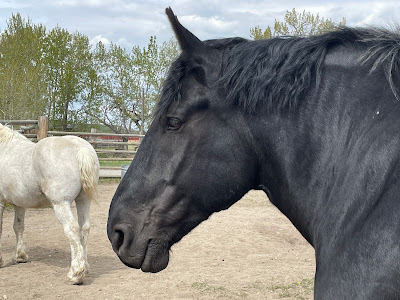 We went back to the RV to make a cup of tea and sat outside drinking it.  We then noticed little furry animals running around.  They were almost the same colour as the grass and were dashing around like mad things, standing up on their hind legs at times.  I looked them up and they were Richardson’s Ground Squirrels or more commonly known as prairie dogs or gophers.  They were so amusing. 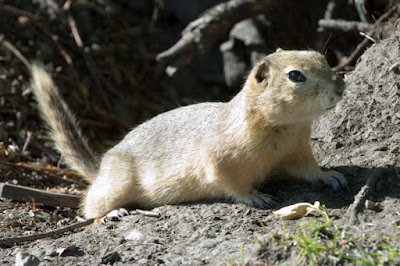 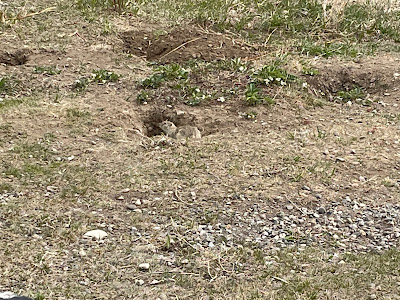 On the way back to the campground we gave up on Google Maps as it was taking us down some rather unpleasant roads.  Sally SatNav is a camping device and won’t do that (we hope) but her journey might be a bit longer.
Back at the campground I decided to catch up on the blog only to find that I had lost, on Word, everything from May 18th onwards.  Try as I might I could not find it anywhere, trying to find missing documents on the laptop is usually easy but on the iPad it isn’t.  Fortunately most of it had already been published, but I was pretty p****d off.

Posted by Linda Gifford-Hull at 20:56