We had winded yesterday as we were meeting my stepsister, Sara, and her mother, Chris, at bridge 74. I had found a car park very close to the bridge, so it made sense.  Sara and Chris live in Bozeat, near Olney which is only about half an hour away.

We had to go on a bit further to wind and were soon moored up by the bridge and waiting to repel boarders!

Once safely ensconced we set off to who knows where!  We wanted a mooring spot where we could put out four chairs and eat our lunch.

It was a nice trip down the canal though, as always, most of it was done on tick over.  As we passed the Lionhearts Cruising Club we started looking for somewhere to moor with our requirements, but it was pretty hopeless.  We saw one but decided to continue in case there was somewhere better.  We were going to wind anyway so that was fine.  As we got closer to Campbell Park it became more and more busy and we gave up hope as the winding hole was almost in sight.  However, thanks to Adam Porter, we knew that there were some offside mooring spots at Campbell Park and, believe it or not, there was one space left and it was Mary H sized.  Some of the moorings are private but there is a length which is public.  As I doubt we will be going down the Grand Union again I don’t mind giving away secret mooring places! 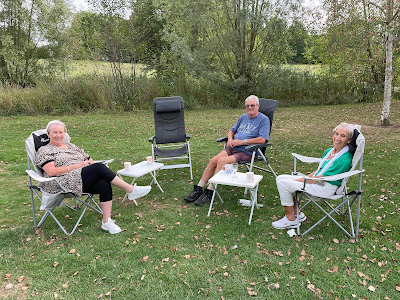 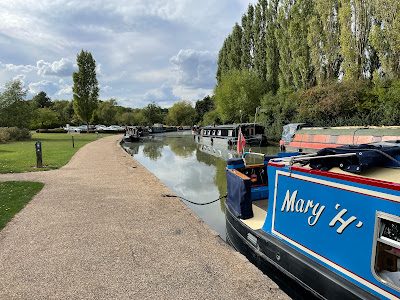 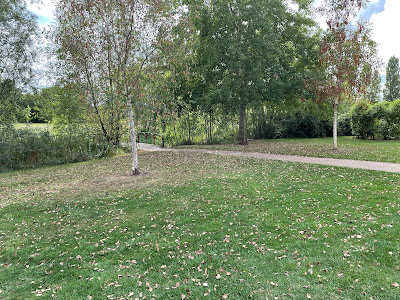 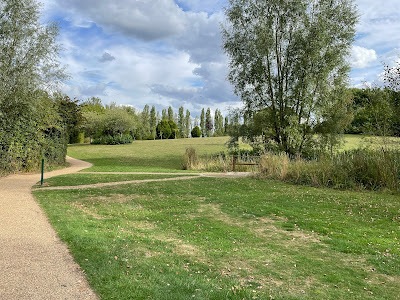 We winded at Blue Bridge and continued back up the canal.  Sara and Chris sat in the cratch, and I sat on the bed, and we chatted on and before long we had covered the 5 miles back to bridge 74!

Under bridge 81A (A509) we saw a floating market.  Maybe Richard will stop tomorrow as we pass. 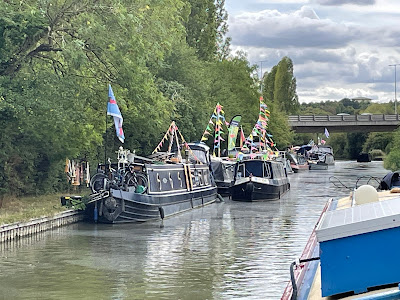 We said goodbye to Sara and Chris and continued on up to New Bradwell winding hole and then moored up before bridge 74.  It had been a lovely day and it’s always nice to catch up with family and old friends.

I mentioned yesterday about The Triangle in Wolverton and how it used to be a railway engine workshop where trains were designed, built, and maintained.  Chris’s father, grandfather and uncle all worked there once.  Small world!

I slept really well and struggled to wake up.  Richard was underway before I dragged myself into the shower!

We passed these two kayaks with the bows pointing out of some ivy.  We thought they looked like huge snakes! 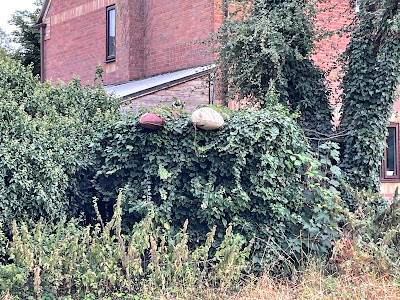 The floating market at bridge 81A was still on so we moored up and I wandered down.  There were some lovely things there, but I really didn’t need anything!  In the end I bought two egg cups and a wooden heart for the Christmas tree.

We moved on and stopped to get water, the tap was so slow that we had lunch and it was still only ¾ full, so we gave up and moved on.

There were two boats in Fenny Stratford lock but with it only having a rise 13 inches, it didn’t take long to turn it.  There is a bridge over the lock which sides, but we were fortunate that a man sitting outside the pub moved it for Richard. 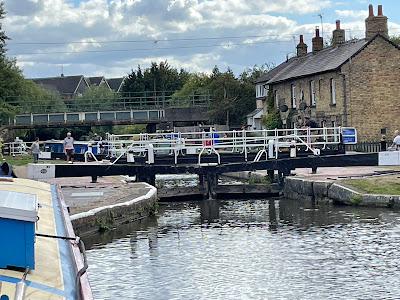 Fenny Stratford lock built temporarily to aid construction of the canal but deemed too costly to remove after completion.  The bridge over the lock is to provide access for the lock cottage.  I found this little bit of information.  The early 1800's were the heyday of the stagecoach and there have been recorded forty alehouses and coaching houses in Fenny Stratford between 1750 and 1810. Among these were the Bull and the Swan, the oldest of the town's public houses still in existence.  40 pubs!!!

We really are getting fed up with all the moored boats, not just the fact that it looks as if they have been moored in one spot for a long time, but the state some of them are in.  We passed one boat who had been chucking bags of rubbish into the hedge, Richard reckoned that there was probably a lorry load there.

We found somewhere to moor before Stoke Hammond Lock.

Posted by Linda Gifford-Hull at 12:18