Yes – back at Bugsworth Basin!  We changed our plans and headed home in our little red car :-)  I was going to go home at the weekend anyway and as the train would cost £97 and the car was only £115 for the week we decided that we would all go home.  We felt that Bugsworth was a safe place to leave Mary H and got permission to leave her for a week.  So what have we been up to?


On Tuesday we went deep into the Peak District towards Castleton.  I saw a sign to Blue John Cavern so we called in there.  I wanted to buy a Blue John stone pendant to go with the earrings that Penny and Jim gave me for my birthday.  We had a coffee and thought about going down the mine but with 406 steps and my knee we decided it probably wasn’t a very good idea!

We drove towards Castleton and came across Speedwell Cavern which is an old lead mine and the trip is in a boat.  I asked if we could take Muffin and was told that as long as he sat on a knee it was fine.  We only had 106 steps to content with which my knee coped with very well.  The boat was a long thin one and 21 of us (and a dog) piled into the boat and set off into the tunnel or adit.  We had a very good guide who not only told us a lot but made it amusing too.  Our guide was lucky as the engine kept working as apparently if the engine cuts out he has to leg it through the tunnel – before engines were fitted to the boats the visitors had to leg it!!
At the end of the adit, we got out the boat to look at the fluorspar veins, the stalactites and stalagmites, and the so-called "Bottomless Pit". This pit is an extremely deep vertical shaft, now choked to within 66 feet of the surface by rock spoil dumped by miners. The original depth of the shaft has been estimated, from the amount of spoil placed in the shaft over the years, at around 490 feet.  A connection was discovered in 1999 between the Speedwell Cavern system and Titan, the largest natural shaft in the UK, which is 464 feet high.


After the mine we stopped in Castleton – it was a lovely day so we sat outside a very nice café and had lunch.  We had planned to go to Peveril Castle but when I saw that it was up a very steep hill I declined!!  Instead we walked around the town and discovered a lovely old town and a very pretty stream.  From Castleton we headed to the Derwent Reservoirs and drove up the side of them.  Ladybower is the first, then Derwent and finally Howden.   (More on the reservoirs at the end of this blog entry.)  Derwent is the reservoir where the Dam Busters practiced their bouncing bomb raids before heading to Germany to do it for real.  There is a memorial commemorating the event.


We headed back to Mary H via Snake Pass – I was rather disappointed as I imagined a very twisty pass high in the mountains – it’s not like that at all!  We had planned to have another day’s sightseeing on Wednesday but when we say the weather forecast we decided to drive home as it was going to rain and be a lovely day on Thursday.


We didn’t have a satnav so Richard worked out the most direct route home but it was very windy to start with.  I was map reading and felt a bit icky but Muffin was actually sick :-( Our journey took 5 hours in total and we got home about 7pm.


It was very hot on Thursday and I caught up with the washing and other errands around the house while Richard went sailing!  The rest of the time was spent doing the usual household tasks though Victoria and I went to Winchester on Saturday and Laura came up on Sunday and we girls spent the afternoon watching a chick-flick and doing our nails!  Laura had brought a pineapple and some strawberries with her and served them up with chocolate sauce!  It was a good weekend to go home as the black currants and gooseberries were ready to be picked – we lost them all last year as we were away for so long.  We also had the first of Victoria’s vegetables for dinner :-)


So here we are back on Mary H.  All unpacked, vittled up and the car returned.  My plants seem to have survived – well all except one cauldron which had tipped over and the plants, I assume, have met their watery grave :-(


The Industrial Revolution and urbanisation of the 19th century created huge demand for water in the industrial cities of the East Midlands and South Yorkshire. The proximity of Sheffield and its neighbours to the Upper Derwent valley were the factors in the decision to dam the valley to create the Howden and Derwent reservoirs.


The River Derwent flows first through Howden, then Derwent and finally through Ladybower.  Between them they provide practically all of Derbyshire's water, as well as to a large part of South Yorkshire and as far afield as Nottingham and Leicester.


The Howden Reservoir is Y-shaped. The county border of Derbyshire and South Yorkshire runs through the middle of the reservoir, following the original path of the River Derwent.


Work commenced on the construction of the dam in July 1901 and completed in July 1912. The dam is 117 feet tall, 1,080 feet long and holds nearly 2 million gallons of water.  The reservoir was first begun to be filled in November 1914, and overflowed for the first time in January 1916, with the water almost immediately passing into supply.


The neo-Gothic solid masonry dam of the Derwent Reservoir was begun in 1902, a year after Howden was started, and proved a mammoth task. The huge stones that formed the walls of the dam were carried along a specially created railway from the quarries at Grindleford.  Derwent Reservoir is around 1.5 miles in length.  At its peak the reservoir covers an area of 75 acres and at its deepest point is 114 feet deep.


During the Second World War the reservoir was used by pilots of the 617 Squadron for practising the low-level flights needed for Operation Chastise (commonly known as the "Dam Busters" raids), due to its similarity to the German dams. Occasional flypasts of the Battle of Britain Memorial Flight at the reservoir are also staged to commemorate the events during the war. 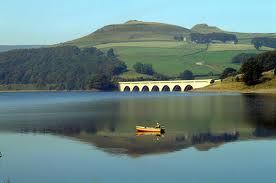 The Y-shaped Ladybower was built between 1935 and 1943, it took a further two years to fill. There are two viaducts, Ashopton and Ladybower, which carry roads over the reservoir The project was delayed when the Second World War broke out in 1939, making labour and raw materials scarce. But construction was continued due to the strategic importance of maintaining supplies. King George VI, accompanied by Queen Elizabeth, formally opened the reservoir on 25 September 1945.


The dam's design is unusual in having two totally enclosed bellmouth overflows (locally named the "plugholes") at the side of the wall. These are stone and of 80 feet diameter with outlets of 15 feet diameter. The bell mouths are often completely out of the water and are only rarely submerged, often after heavy rainfall or flooding.


The building of the reservoir resulted in the 'drowning' of the villages of Ashopton and Derwent.  The buildings in Ashopton were demolished before the reservoir was filled, but much of the structure of Derwent village was still visible during a dry summer some 14 years later. The clock tower of the church had been left standing and the upper part of it was visible above the water level until 1947, when it was seen as a hazard and demolished with explosives on 15th December.


Some of the above photos have been “borrowed” from the internet.
Posted by Linda Gifford-Hull at 09:09