After filling up with water we began retracing our steps back along the Peak Forest to Marple.  There are two swing bridges and two lift bridges to contend with.  I don’t mind the swing bridges and Muffin likes to ride on them as they swing, but I dislike the lift bridges so you can imagine my delight when a very nice C&RT man opened one of them for us!  I only had one to deal with thank goodness. 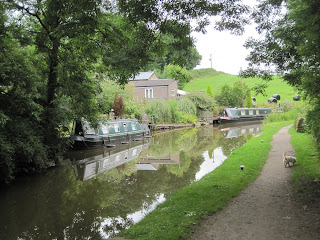 We are having a very leisurely trip to Macclesfield – well for us anyway.  While we were at home Muffin stole my glasses and chewed them to the point of no return!  One arm was severely twisted and a lens was out and cracked.  I went to Specsavers in Winchester  and they have ordered me a new pair which will be sent to Macclesfield – hopefully by Monday of next week.  As we only have to travel 18 miles with no locks we could do this in a day and a half but we will take about three!  Richard is not used to this and has already started twitching!!! 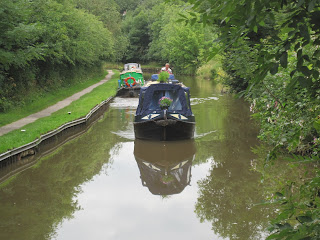 We are moored up somewhere between bridges 20 and 21 with a lovely view of the Peak District and I am moor more than happy to play on the laptop or read. 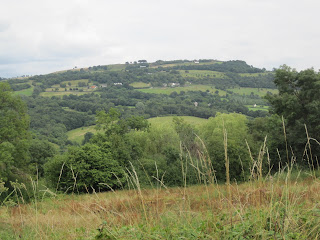 I’ve been doing some research on the Peak Forest Canal and come up with the fact that it was started in 1794 and completed in 1796 but it was in two halves with an inclined tram linking the two parts.  This didn’t work and the Marple lock flight was opened in 1805.  The tramway from the quarries which carried stone to Bugsworth Basin closed in 1924 and the canal started to decline.  It was thought that the lower part of the Peak Forest along with the Ashton Canal and the Marple flight might have to be closed in 1962 as the canal was impassable.  The Peak Forest Canal Society was formed in 1964 and, along with Inland Waterways, managed to get the whole length of 14.8 miles opened in 1974.

Bugsworth Basin to somewhere  between bridges 20 and 21 on the Peak Forest Canal
5.54 miles
0 locks
4 swing/lift bridges
Posted by Linda Gifford-Hull at 09:05