By 9am there were boats moving in both directions and we had to wait at each of the eight locks.  At one lock there were six boats waiting to come up – all heading for Alrewas as far as I could gather!  As we had passed through Alrewas there was hardly any mooring left so there were going to be quite a few unhappy boaters L
We kept going until we reach Branston Water Park where Richard wanted to moor.  We arrived about 2pm and it was already busy there.  I really don’t remember August being this busy before but maybe this year we are in a more popular area.


It was a lovely blowy afternoon and I was really glad that I had done two loads of washing on our journey this morning – one was towels and they blew dry quite quickly. 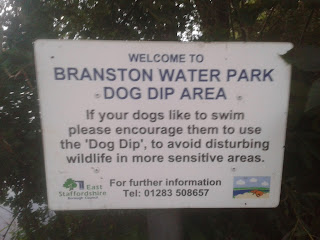 Richard took Muffin for a walk round the lake of the water park and then in the evening we both went again.  I am having real problems with my feet so we didn’t go all the way round but I did have to smile at a sign saying that dogs could swim in a certain area but that part of the lake was filthy and I certainly wouldn’t have wanted Muffin swimming there.  (Sorry the photos are brilliant but I was using my phone.)