We woke up to rain but fortunately we weren’t going to move on today.  Victoria was joining us and we had to go down into the city and meet her off the bus.  She had driven to Devizes, left the car there and then taken the bus into Bath.  (YES we have crew for Caen Hill!!)

Victoria’s bus arrived and we went for lunch to Giraffe to have a pow wow.  Richard wanted to get a car jack to see if he could straighten the tiller and Victoria and I wanted to have a look around.  Richard got his jack and went back to Mary H with it, Victoria’s case and Muffin!!  Victoria and I thought we would go to the Roman Baths but at £13.50 each (no concessions unless you are 65) we decided against it.  Richard and I had been in 2010 so I wasn’t too bothered.   However we did go to the Abbey which is an Anglican parish church and a former Benedictine monastery.  It was founded in the 7th century, reorganised in the 10th century and rebuilt in the 12th and 16th centuries;  major restoration work was carried out by Sir George Gilbert Scott in the 1860s. It is one of the largest examples of Perpendicular Gothic architecture in the West Country and is a Grade I listed building.  The East Window contains 56 scenes of the life of Jesus Christ.

As we left the Abbey we came across a man with pigeons all over him!  I asked if I could take a photo and he said it would be better if we were in the photo – see for yourself!  He did offer us some hand cleanser as we left! 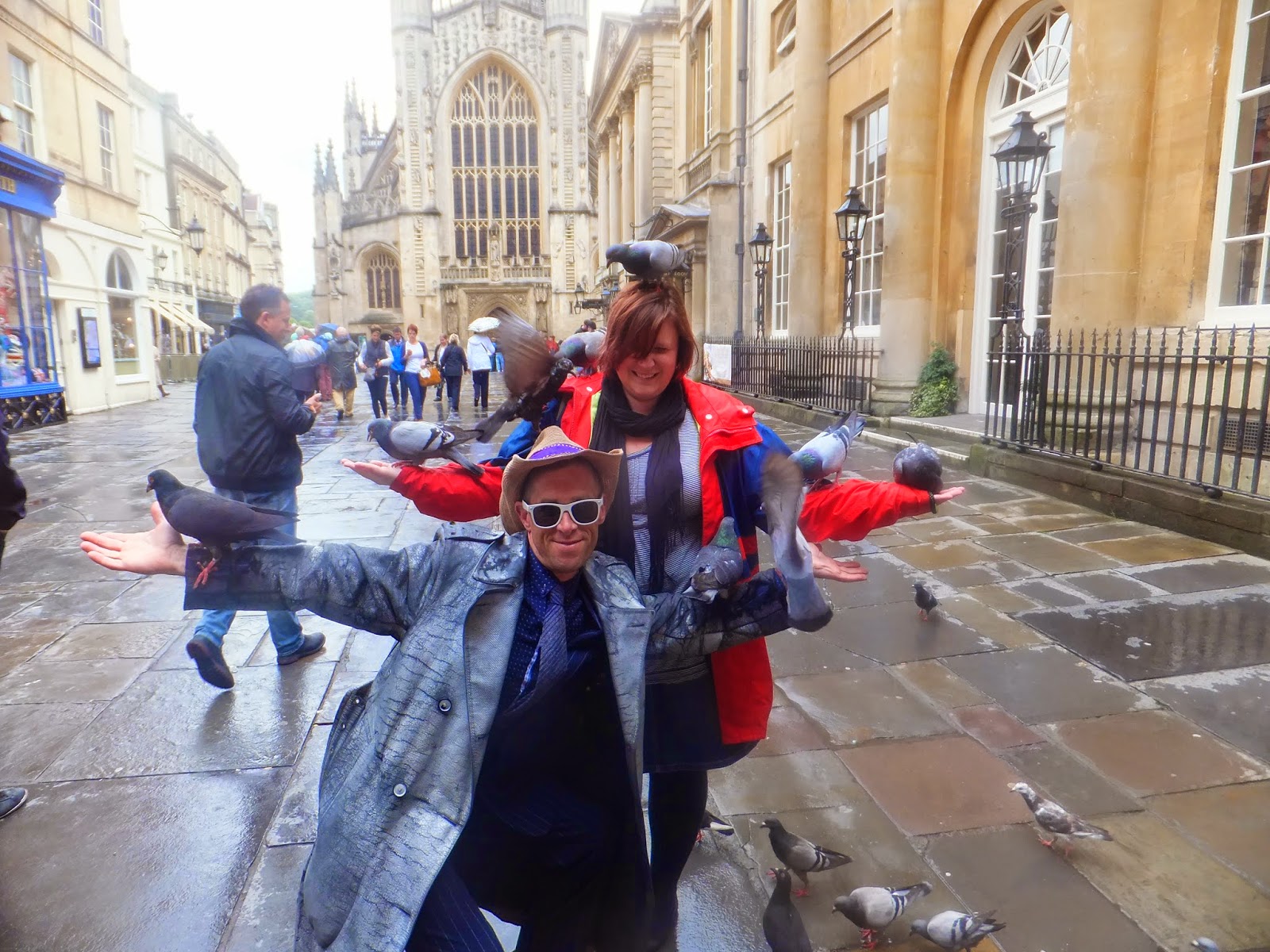 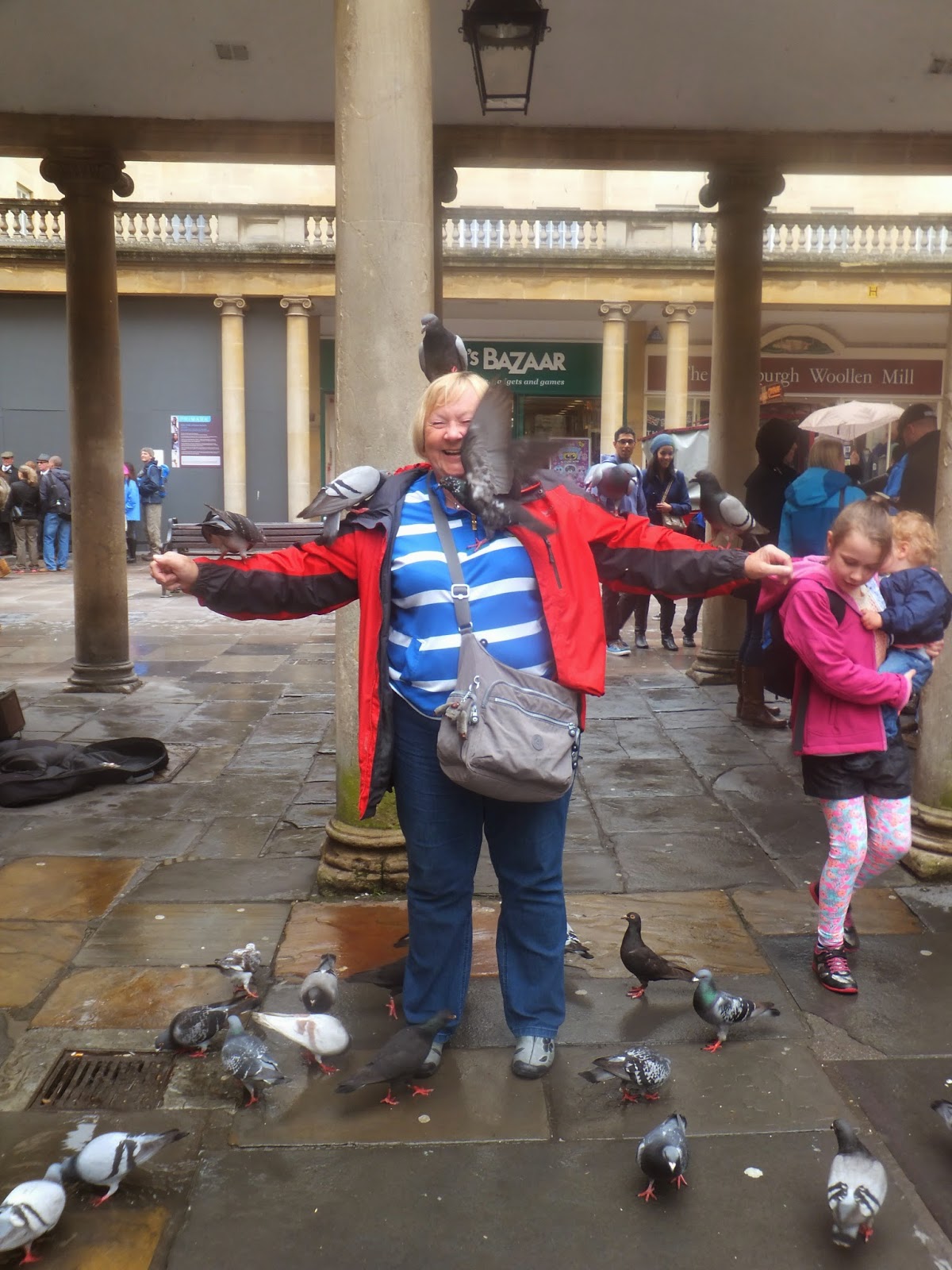 It was such a miserable afternoon that we really didn’t feel like doing very much but we did wander through the indoor market and then look over the horseshoe waterfall at Pulteney Bridge.  We then went and stocked up at Waitrose and got a taxi back to Mary H.

Richard had managed to get the tiller straightened a bit with the jack but each time when he released the pressure it went back almost to the original bent position.  He had also made a jury rig so at least we have a tiller now though it’s not the most elegant of things! 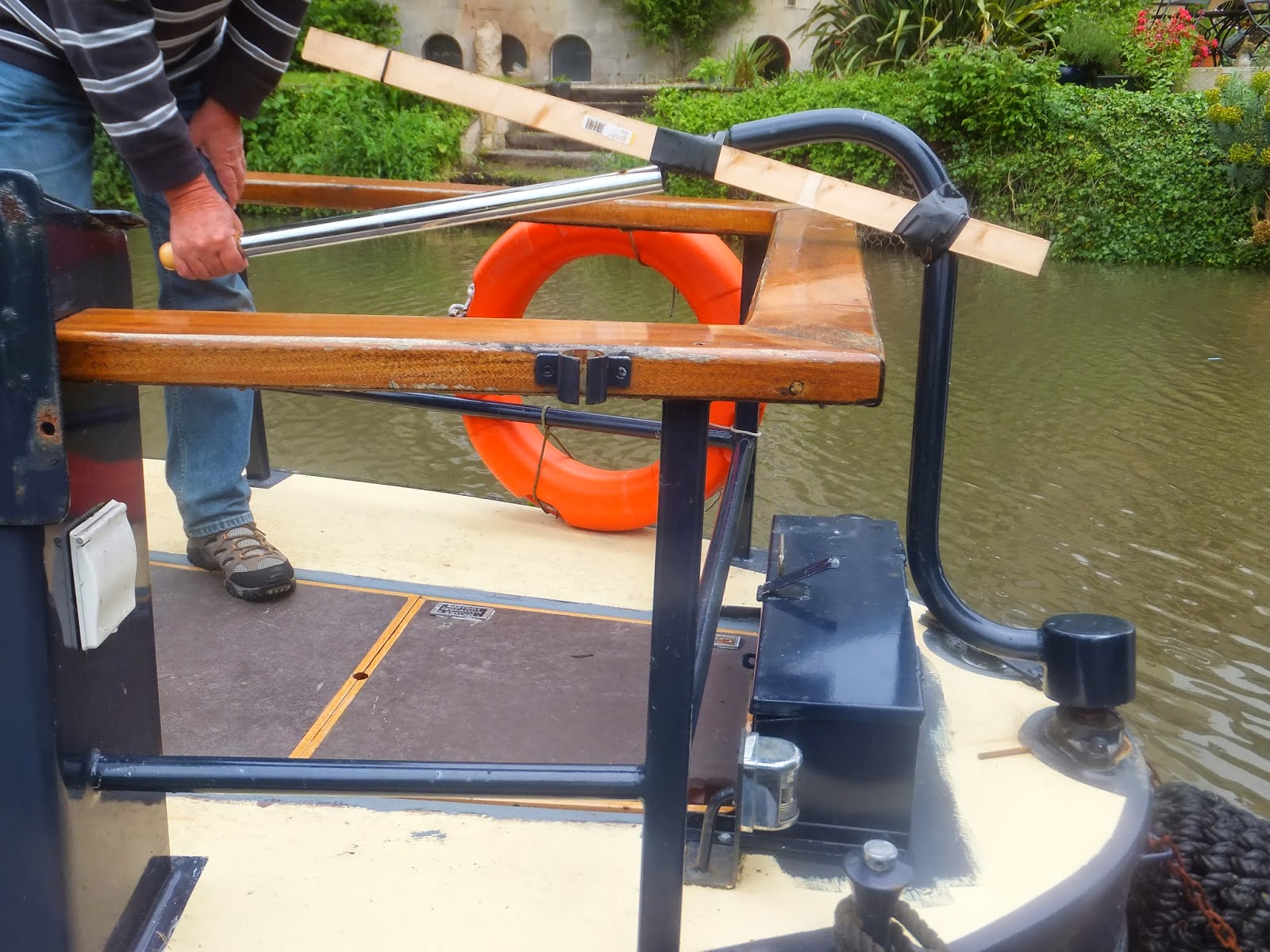 We decided to give the new tiller a trial and went up three locks to the moorings overlooking the city – though the trees have grown a bit since we were last here and you can’t see much anymore.  There was a lot of room up there even though it was the Friday of a Bank Holiday weekend.

It turned into an OK evening and we sat on the rear deck having a drink until we were too cold to stay there any longer.