Either the heifers didn’t lick the boat this morning or I didn’t hear them.  Apparently they had a go at Ferndale and FL.  However Muffin decided that 7.20am was late enough for us to sleep – this is most unlike him as he is usually very good in the mornings and doesn’t stir until he knows we are awake.
It was farewell to Ray, Diane, Andy and Sue as we are heading down to Oxford.  They are going to look at Kelmscott Manor and then make their way downstream.  We will be meeting up with Ferndale again next week and will do some or all of the South Oxford with them. 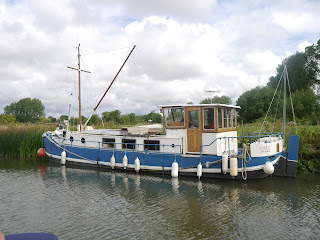 We shared Buscot Lock with a motor cruiser and a large family on their first trip out.  There were four strapping young people all eager to do the lock as it was on self-service.  I wasn’t going to complain!  At Buscot Lock there is a warehouse which once local cheese was despatched, by river, to Oxford and London.

Buscot Estate was acquired by one Robert Campbell who, in1859, set out to revolutionise agriculture in the area by growing sugar beet which was processed into alcohol spirit which was exported to France for brandy making.  A network of narrow gauge railway lines were spread across the area to help transport.  Campbell restricted his workforce to a nine hour day but sadly his enterprise came to sudden halt in the financial crash which followed the Crimean War.

We passed Kelmscott where the 16th Century Kelmscott Manor is situated.  William Morris used the house as a summer retreat for 25 years possibly writing some of books and poetry there.  Morris was not only a writer but a political activist, designer of wallpapers, stained glass windows and furniture.  He didn’t design the lovely old Morris Traveller though!
We moored up for the night opposite Chimney Meadows.  This is a National Nature Reserve, owned by English Nature and managed by BBOWT (Berks, Bucks & Oxon Wildlife Trust) since 1999. Only 1,500 hectares of this type of floodplain meadow survives in the UK. Vistas of elegant plants including meadow foxtail, adder’s-tongue fern and green-winged orchid, along with butterflies and birds can be enjoyed from the raised Thames National Trail path that runs alongside. The larger section of Chimney Meadows, is owned by BBOWT. The area comprises old hay meadows, wet grassland, wet woodland, ancient water meadows and ex-arable land under reversion to flower-rich meadows. The fields are steeped in history, with findings of Roman pottery, an extensive Anglo-Saxon burial ground and relics of medieval ‘ridge and furrow’ ploughing. Threaded through with 14 km of old waterways and 17 km of hedgerows, the reserve also has a number of ponds and patches of scrub.

By the way the bridge is called Ten Foot not because it is 10 foot high but because it spans a 10 foot part of the river.