What a lazy day!  We had nothing to do so did nothing!!!  It’s certainly not like Richard to have his nose in his computer all day but I know he was coming up with some good and crazy ideas for the boat!  We have now planned the new bathroom which he will work on during the winter.  It will be a walk through one as the corridor beside the current bathroom is a waste of space and can be incorporated into the bathroom to make more room.

We had a couple of interesting boats pass us this morning.  Firstly I could hear a steam whistle and as we are nowhere near a railway it had to be a steam boat.  It was Adamant.  Although not a genuine original, this boat is probably the closest working example of a steam canal tunnel tug on the waterways today. This is particularly so as both the hull and engine date from the end of the 19 th century.  The hull is built from the stern ends of two horse-drawn Birmingham ‘Joey’ boats built of iron in the late 1880’s or 1890’s with recent counter and cabin top. Conceived and built as a steamer by Chris Stubbings in the 1980’s, Adamant has never been powered by anything other than steam.  The machinery is well forward so that the funnel in the correct steam tug position; the original boats were little more than a floating steam engine with the machinery occupying nearly half the boat’s length. This meant they had the necessary ‘grunt’ to tow a string of maybe 12 boats at a time.  She came down in a flurry of dirty smoke and we couldn’t see her until she was quite close.  I was so busy taking photos that I didn’t think about my washing until the engineer said that he was sorry about my washing! 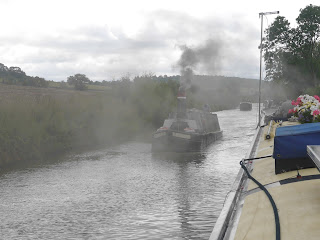 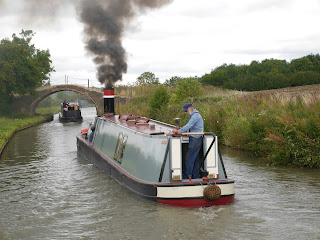 Adamant was closely followed by Nuneaton and her butty Brighton.  These two boats are owned by Narrow Boat Trust and are still used for carrying, traditionally as a pair, whenever possible, crewed by members.  Nuneaton is an all-steel riveted motor boat built by W. J. Yarwood & Sons Ltd at Northwich, Cheshire - and so known as a 'Large Northwich'.  Launched August 1936, and fitted with a National diesel engine, it cost £900.  Originally paired with the wooden 'Large Ricky' butty Nunhead.  Brighton is an all-steel butty built by Harland and Wolff Ltd at Woolwich - and so known as a 'Large Woolwich'.  Launched in December 1935, it cost about £400. Originally paired with the motor Bristol.  Sadly I wasn’t quick enough to take a photo but I have borrowed this photo from the internet. 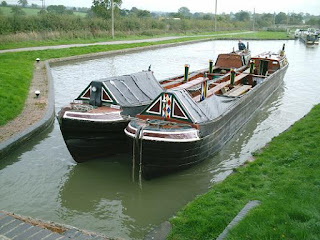 Here are a couple more of the interesting trivia bits that I found yesterday.

The Grand Junction and Oxford canal companies were bitter rivals. When Parliament considered the Act of Parliament for the building of the Grand Junction, the Oxford Canal successfully petitioned to make the Grand Junction pay "bar tolls" to the Oxford Canal to compensate for the loss of traffic south of Napton.  Traffic from Birmingham had to use 5 miles of the Oxford Canal to get from Braunston to join the Grand Junction at Napton. The Oxford Canal exploited this by charging high tolls for Grand Junction traffic on this short section.  While I was trying to find a nice photo to “borrow” from the internet for this paragraph I came across this painting and I love it.  You can buy it from The BoatShop at Braunston and I might just do that!
The Oxford Canal was originally built as a contour canal, meaning that it twisted around hills to minimise vertical deviations from a level contour. However, with one eye on the developing railway network, in the 1820s the northern section of the canal between Braunston and Hawkesbury Junction was straightened out to reduce navigation time. This work reduced the distance by almost 15 miles. The section south of Napton was never straightened.  This map isn’t the easiest thing to follow but I think it gives you an idea.

We had the BBQ meat I bought in Braunston to eat tonight.  It had been very grey all day but as Richard got the barbecue out the sun peeped through and managed to stay peeping until he had finished cooking :-)
Posted by Linda Gifford-Hull at 10:35