Just the 5 locks and then the summit pound.  The first two were in our favour and as I got to the third I went to swing the bottom gate open and it wouldn’t move – duh it was full!  Still it gave me time to look at the buffalo and think what strange animals they are.  At the fourth lock we came across a chap trying to learn how to do the lock single handed – he had his wife and daughter onboard but he was determined to do it even though it meant holding us up.  There was a VL at the top lock (Napton Top Lock - I didn’t think to take a photo of the sign, Brian!) which was very helpful as it was busy.  We wanted water and fortunately managed to squeeze in by the tap – it really is a silly place to have a tap.  While we were waiting for the tank to fill more and more boats arrived to go down the flight and it became pretty chaotic.  On the spur of the moment I decided to walk on and let Richard catch me up – I said I would meet him at the next bridge.  However the next bridge was quite a long way and on a bend so I walked on and on and on – finally stopping at bridge 125.  On checking I had walked 2¼ miles and quite fast at that.  Now I’m not known for walking anywhere unless I have to but actually I enjoyed it! 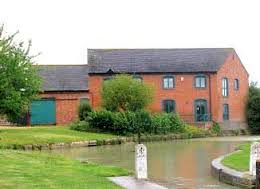 We wanted to stop at Ladder Bridge as there can be a lovely view if you are lucky enough to get there early – and we did getting the best spot or at least we think it is!  How can I say this and not put a photo on – but I completely forgot to take one.  I always find when I come back to the boat that I have got out of the routine of taking photos and of blogging in general really which is why I am behind!

I was pretty knackered all afternoon but felt good about my walk – I will have to try and keep it up. 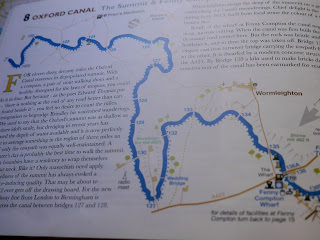 he Oxford Canal summit is 11 miles long but only 4 as the crow flies – it really does meander as it follows the contours of the land. I thought I would take a photo of the page in my Pearson’s guide so that my non boating readers can see what I mean.  There is a radio mast near Fenny Compton which consistently moves as you move along the canal!

I passed the “boat in a hole” on my walk and noticed that at the end of the field where he is holed up (ha ha!) there is a sign offering moorings.  I assume by that that he owns the field.  So what is he doing wrong?  I guess C&RT can’t do much as he is on his own land – yes he has breached the canal without permission (?) but it is sound now.  However I suppose he needs planning permission from the local council to have a dwelling there.  I am pretty sure the boat is sitting on the ground – there is some water around it but very little which means that he has put a structure on the field.  Of course for all I know he may have had permission from C&RT and also have planning permission!  It’s a nice place to live but the boat must be dark living in a hole like that.