We woke up late this morning – it was gone 8am which for us is late.  When we are at home we use the TV as an alarm clock, it goes off at 7.30am, but on the boat we wake up when we wake up.  Richard is usually first awake but it usually within 5 minutes of 7.30am!

The sun was shining and the sky was blue – Richard lit the fire on the boat on Tuesday night and I knew that the weather would change! 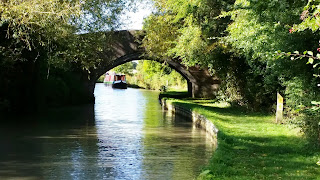 I decided to walk the first part of the trip and managed 1½ miles today – I think that is enough really as I was knackered yesterday afternoon!  I was looking in my Pearson’s guide which is a couple of years old and it says that the towpath is not good however on my walks I have found it to be good – so maybe C&RT are doing some good. 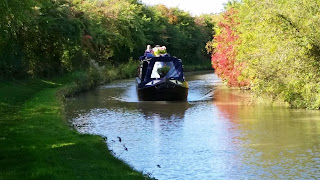 We stopped at Fenny Compton Wharf to dump rubbish and to see if I could get some cereal.  The Cheerios were missing from my Tesco order as they didn’t have any!!  All I could get was porridge oats so it will be engine on, change inverter over and then microwave in the morning.  Still we aren’t far from Banbury now where we can stock up again.

We stopped just above Claydon Locks for lunch and then set off down.  We found a boat coming out of the top lock and thought great they will all be in our favour now – WRONG!  The next one was against us as were the others.  No one had gone passed us while we were having lunch so they must have been having lunch in front of us grrr!

We got a good system going down the locks and it wasn’t soon before we were at the bottom.  We decided not to stop at the nice moorings below the locks but in fact didn’t go much further stopping just after Clattercote Bridge.  I know I keep referring to my Pearson’s guide but I do like them.  I had to smile at something that is in there for where we are.  “Wormleighton, Boddington and Clattercote are not, as you might erroneously assume, a rather stolid firm of Banbury solicitors, but rather the three reservoirs which feed the Oxford Canal”.
This afternoon I finished planning our summer cruise for 2016.  It will be our longest ever if it comes off.  Basically it will be Newbury to Ripon and then back to Newbury – a total of 903 miles and 609 locks!  Of course something is bound to come up which will scupper it but as we already have planned two one week holidays hopefully it will work.

I needed to dead head the plants as they hadn’t been done since we left the boat back at the end of August.  I had been quite severe then and it certainly paid off.  I thought that the time might have come to ditch them but they have other ideas with lots of new flowers appearing.  I don’t think the troughs have long to go but the geraniums are doing well but of course Jack Frost might get them before long.