The batteries were down again this morning so Richard checked them out to see if maybe one had shorted out but they are all OK.  We will give them one more chance today but if they go down again we will have to hot foot it to Newbury :-(

On our way between Northbrook and Pigeon’s Locks we came across Yarwood – another blog I follow.  We pulled up and had a quick chat before a boat came along and we had to move.  Lesley usually blogs but has stopped for the summer but she says that she is going to start again!  If you follow the link to Lesley's blog you can read all about their trip across the Wash earlier this year.

Both What a Lark and Yarwood are blogs that I have followed for ages and it was so nice to finally meet them.  Blogs are funny things as you get to know people so well without ever meeting them so that when you do finally meet them it’s like coming across old friends! At Shipton Lock there is a green boat moored up which has broken down on it – it was there when we first passed on August 5th – I think someone is taking the p**s.  It is a really nice mooring place which has been taken for almost two months now. 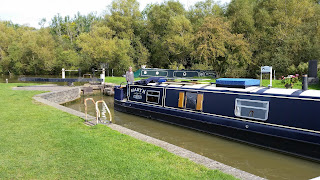 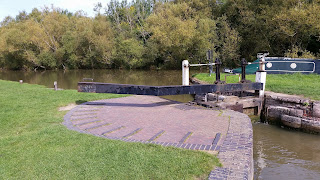 I like Shipton Lock.  It is one of the lozenge shaped ones where the drop is very slight and the theory is that the lock is wide so it discharges a comparable amount of water to the other deeper locks on the canal. Aynho Weir lock is similar.  It’s not just the shape but it’s in such a lovely location. 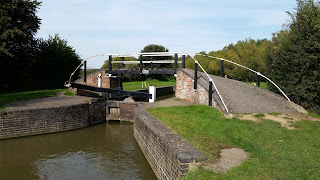 We filled with water at Thrupp services – well we didn’t fill to the top as it was so slow and we wanted to go to Annies Tea Room for lunch.  There was a lot of mooring at Thrupp but not on the 7 day moorings of course!  It was my first trip to Annies and I wasn’t disappointed though I didn’t have cake!  I had a cheese salad with a big chunk of brown bread – it was delicious.  Just for the record Richard had an egg mayo sandwich on thick slices of brown bread. 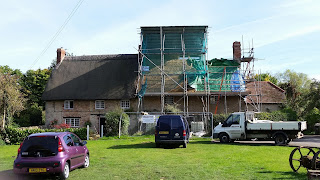 In the little courtyard where Annies is located there are two lovely thatched cottages, one of which is being renovated.  They are, or will be, real chocolate box cottages.  However the railway runs right, and I mean right, past the back of them.  Such a shame but I guess it’s better than a motorway where the noise is constant.

When we got back to the boat the batteries still looked good so we decided to stay in Thrupp instead of going out into the countryside.  Even at bed time they looked good.