Before we left Aynho Richard pulled over to the Wharf and emptied what needed emptying!  Pulling away from the Wharf he was rather too much to the left of the road bridge.  I was sitting down below and all I could hear what a nasty scraping noise – I immediately knew it was the chimney.  We have a new chimney this year with an Aladdin’s hat on – it now looks a bit more like Norman Wisdom’s cap :-( 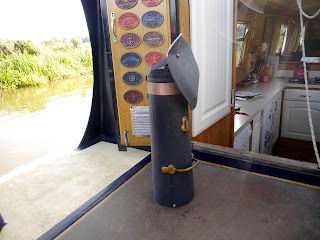 Somerton Deep Lock was our first lock and this time I steered and Richard locked.  I know it is a very deep lock but I think having done Tuel Lock in 2013 this one doesn’t seem too bad still it’s interesting to descend into the bowels of the earth from time to time! 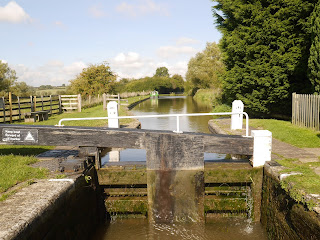 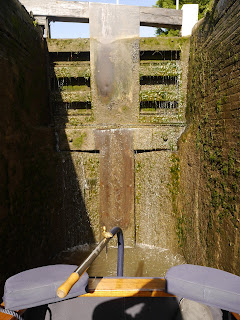 We stopped before for lunch and I could hear the River Cherwell gurgling past us – it is very close to the canal from here to Lower Heyford.  I walked to the lift bridge where I arrived just in time to open it for a boat coming the other way.  It’s a funny bridge as you have to sit on it to keep it open – it even has a little ledge to sit on!

When we got to Dashwoods Lock we found a familiar boat – not that I have actually seen it before but I’ve seen it in lots of photos.  It was What a Lark with the lovely Lisa and David on board.  We had a quick chat and the obligatory photos and then we moved down the lock.  However as we were going to stop soon anyway we stopped below the lock so that we have a longer catch up with Lisa and David. 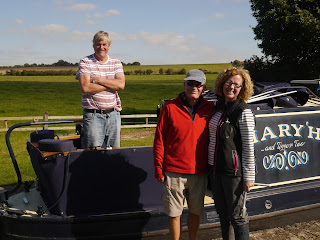 I was just hanging out the washing when another familiar boat appeared, it was Peter on Futurest.  Peter’s blog is one of the first I started reading and we met him briefly in Nottingham in 2012.  We helped him up the lock and then went and a cup of tea on board What a Lark. 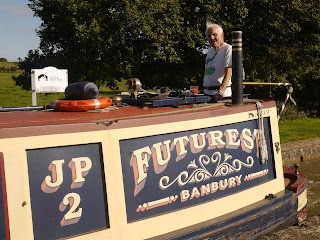 I have been aboard some lovely boats but What a Lark has to be in the top three!  She is beautiful – I think she was launched in 2012 and is 70 foot.  We sat in the cratch having tea and I was so envious as our cratch is too small to sit in really.  Lisa and David are summer cruisers like us – most of our friends are continuous cruisers so it was nice to meet other summer cruisers.
We went back to Mary H and discovered that our batteries had gone down a lot.  Richard put the engine on but the gauge was very slow in going up and we had to run the engine again just before we went to bed.