“Season of mists and mellow fruitfulness” said the chalk board at Godstow Lock.  That summed this morning up.  We woke up to mist over the river and the meadow and I felt very mellow!!  I thought the lockie must be a poet but I found out that it is the opening line in To Autumn by John Keats. 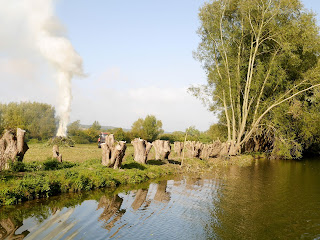 Down through Oxford and under Osney Bridge, Richard had remembered to take the chimney off!  Before the junction with the Oxford Canal there is (or was) a wooded stretch of the river, however the trees on one side have all been cut down.  Osney Lock was on self- service and we shared it with a small motor cruiser who got himself in such a muddle with his ropes and had stopped so far back that I had to ask him to move forward to shut the gates.  There was enough space for 4 visiting boats opposite Christ Church Meadows – I’m not sure if the Council are moving the liveaboards on or if some have moved off. 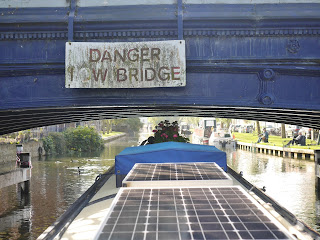 There is very little traffic on the river.  Talking to people at locks on the Oxford and from blogs I have read I can see that a lot people are doing the same as we are – heading to their home marina for the winter.  This is the first year we have returned to the same marina as other years we have over wintered where we have go to at the end of the season.  It is a rather nice feeling to be going home.  I think we will probably try and return to Ham Manor again in 2016 even though we plan to go north during the summer.  If we go back to Newbury it means that, even though we have to battle along the K & A, we can get our fix of the lovely River Thames each year.
We filled up with water above Abingdon Lock and then looked for a mooring.  Abingdon was really busy and the only spot we could find was on the end on the meadow, strangely enough right in front of No Problem!  I knew Sue and Vic would be in Abingdon today but didn’t expect to moor quite so close!
Richard and I went to Waitrose to stock up on fresh stuff and on our way we came across Sue who had been doing the same thing.  On our return to the boat we made a cuppa and took our deck chairs and went and chatted to Sue and Vic’s daughter, Louise.  Oddly enough Louise live on Hayling Island, just down the road from us!  Sadly we didn’t see Vic as he has a bad back and was down below.  We have caught up with No Problem on various occasions but they have been flying chats so it was nice to sit down and have a proper one.

As I headed back to the boat to cook a chilli I got a phone call from Victoria.  She had been working in Oxford and thought she would call in and see us.  She managed to find her way to the car park at the top of the meadow and Richard went to meet her.  It was so nice to see my little girl – I do miss my children when I am away.