Another morning with river mist – it’s quite heavy until the sun comes through.
We were having breakfast when a toot toot took me to the side hatch just in time to wave goodbye to No Problem.  I do hope that Vic’s back gets better soon otherwise Sue will be single handing up the Oxford.

Culham Lock was on self-service and it must have taken at least 30 minutes to fill – crazy!  Clifton Lock had a Lockie. 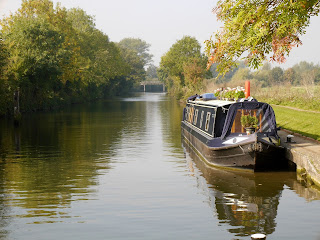 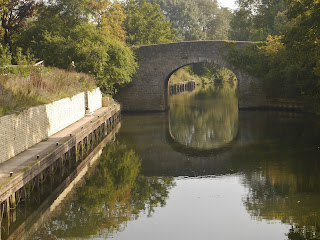 We pulled over above Day’s Lock where we stopped in July for lunch.  However it was such a glorious day that we decided to stay put.  I put my chair out on the bank and finished my book, caught up on blogs and did some training with Muffin. 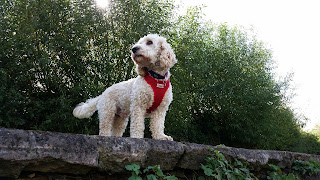 Muffin suffers from separation anxiety and it is definitely getting worse.  While we were at home the other week we saw a dog psychologist to help us so that we can leave him at home alone.  We have had a few disasters through the winter – the worst being when he decimated a plastic swing bin while he was shut in the utility room!  We now know what we have to try and do but some of it isn’t going to work on the boat.  That bit is the actual leaving of him.  We tried it once for two minutes and he got himself so worked up.  He is so used to going everywhere with us on the boat whereas home is different so we will work on that one when we are home.  We have been trying some training but we are hopeless and keep forgetting!  However we have been working hard on heel work – Candy suggested that we buy him a “snout collar” or a harness that goes round the nose and the neck.  He spent the first 10 minutes trying to get if off then gave in!  He now walks to heel nicely with it on as it is obviously uncomfortable when he tries to pull.  More work is needed and then we have to try it without the harness on.  We have also been working on “fetch” – he now goes after the ball but when he comes back he drops it about 10 feet in front of us!  If he brings it right back he gets a treat but usually he still drops it and comes on to us for a treat – which he doesn’t get!  Muffin is no longer allowed to sit on the sofa with us in the evenings – he has to lie on the floor.  He also has to ask if he wants to come up on our knee and we don’t always say yes.  Also we have to stop eye contact with him – now that one I find hard when you know his little face with those big brown eyes are looking at you!  Still we both feel that improvement has been made – the main goal is to be able to leave him on the boat next summer if we want to go out for a meal! 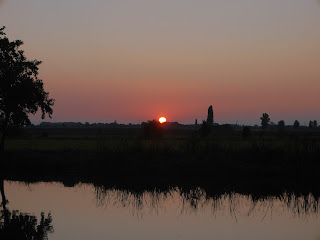 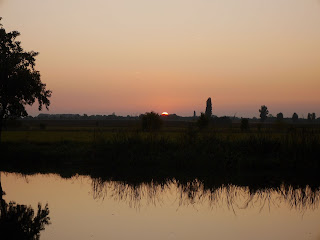 We cracked open a bottle of wine about 5.30pm as we wanted to make the most of the sunshine.  It was really lovely watching the sun go down while sitting in an idyllic location with a glass of wine in hand on October 2nd!  A lot of people moor just above Day’s Lock but we feel that our little spot is better. 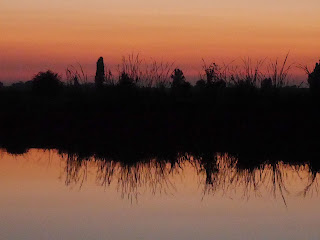 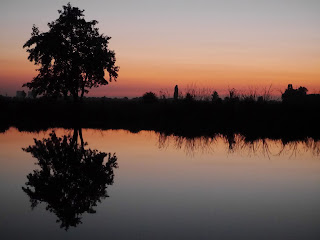