We wanted an early start as we had a rendezvous to make - we managed to get away at 9.30am.  There was a lockie on at Days Lock who spent the entire time on the phone but he did managed a smile and a “hello”.  Between Days and Benson Locks I made a vegetable shepherds pie.  I wasn’t going to tell Richard that it had Quorn in it but he had seen it in the fridge and knew it was going to be served in something!  He never asks just waits to see what happens – strange man!!  Or maybe I’m just nosey!  The Lockie at Benson was on the phone the whole time too - maybe she was talking to the man at Days.

Wallingford was quiet with only a few boats moored up but there were a lot of rowers out.  It seems strange when I am down below to see a sculler whizzing past! 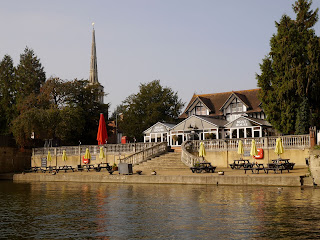 It wasn’t long before we arrived at Cleeve Lock where we filled with water.  Then it was down through the lock and to one of our favourite spots on the Thames.  There were already two boats there but there was a nice Mary H sized spot.  We had just finished mooring up when the side hatch of one of the boats opened and it was Fiona on Epiphany – I wasn’t surprised as they were our rendezvous!  We had our lunch and then Fi and John came over and we sat on the meadow with a cuppa and a catch-up.  So far we have managed to catch up with them every year somewhere on the system and it is so nice to see them.  This year they have been on the Nene and the Fens, we were interested to hear what they had to say as it is the one area we haven’t been to yet.  I’m not convinced that it is for us but we will do it one year as we have to tick it off the list!  Sadly, well for us anyway, Fi and John were leaving about 3pm as they were heading up to the Beetle and Wedge at Moulsford for a special 40th wedding anniversary dinner.  They had booked to moor outside and also for breakfast on Sunday morning – lucky them.  Richard and I wish them a wonderful anniversary. 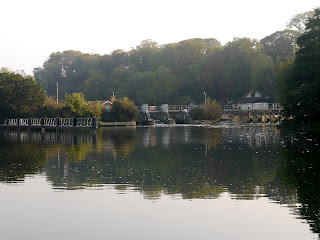 I’m afraid that the afternoon was spent reading again!  It’s a hard life you know!!  However I did spend some time with Muffin doing fetch.  He just can’t grasp the fact that he is supposed to bring the ball back and drop it at my feet but I decided to try high value treats – hotdog bits and that did help but every now and again he would still drop it too far away. 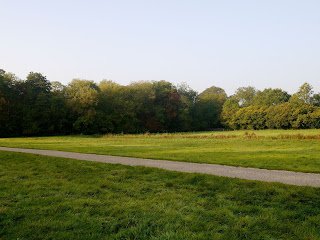 Below Cleeve Lock is such a lovely place.  There are lots of backwaters to explore – maybe next time!  I guess we really need to do it when the Lockie has gone home!  Apparently there was a flash lock recorded on the site in the 16th century. The first pound lock was built of oak in 1787 alongside a meadow which was then known as Winch Meadow. It was originally to be called Streatley Lock, but in the event took its name from the village of Cleeve on the opposite side of the river. Until 1869 Cleeve Lock and Goring Lock were usually operated a single keeper. The lock was rebuilt in 1874.  There – some interesting facts!