We left our mooring about 9.30am and cruised down to Tyle Mill Lock.  The lock is followed very shortly by an electric swing gate which needs to be opened before leaving the lock.  I forgave my feeling of power (I usually do the electric swing bridges!) and let Richard do the lock and bridge.  We were going to stop and empty the loo at the services but I noticed that the “Geriatrics” were moored opposite (on private moorings) and were about to leave.  The loo could wait!  Richard realised and ran back to the boat and we pulled out in front of them – we just didn’t want to get stuck behind them again.  When we got to the next lock, Sulhamstead, there was a boat already in it waiting for us.  It was the historic working boat Dover who had featured in the TV programmes ‘Narrow Boat’ & ‘Narrow Boat Afloat’, in which Alan Herd took Dover, then a rusting hull, and refitted her out.  I had a brief chat to the owner who has had her for about a year.  He said that the original fit out had been pretty poor and she had since been re-fitted.  Also when sponsors got involved with the programme lots of electronics and fancy electrics had been put on and that the wiring was a nightmare – all that and the washing machine won’t work!! 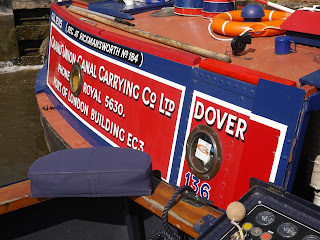 Dover pulled over just before Sheffield lock where we paired up with Mrs. Nippy with Rosie and James (she called him James too!).  It was then some white water rafting down the fastest part of the River Kennet taking in Garston and Burghfield Locks - thank goodness they are in lock cuts as I doubt if we would have been able to stop.  The Thames was still on red boards between Caversham and Sonning so we decided to stop at the Cunning Man for lunch. 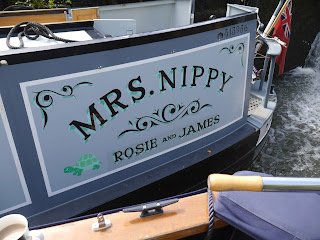 The Cunning Man is a Vintage Inn and after our experience at The Trout at Godstow last year I didn’t hold out much hope.  We both chose the roast beef at £11.50 each!  Well the best thing I can say about it is that Muffin enjoyed the meat   We were just mulling over whether or not to risk a dessert when I looked up and saw a man walking down the path who looked just like Doug from NB Chance – hang on it was Doug and following him was James!!  I called out and they came over.  Doug had seen my Facebook check-in saying that we were at the Cunning Man and as they were on their home from Lechlade they thought they would come and surprise us – and surprise us they did!!  We had a lovely couple of hours sitting in the sunshine chatting and sipping cocktails – well not really the men were on pints and I hit the cider!  They came back to Mary H for a coffee before heading back to the south coast.  Thank you so much guys for going out of your way to come and see us :-) 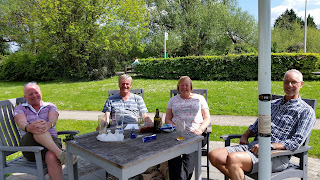 After Doug and James left we decided to head a bit further towards Reading and stopped just before Fobney Lock.  It was a lovely evening and as I hadn’t got my 5000 steps in we went for a walk buying a bottle of elderflower cordial from NB Fenakapan (a cider and wine boat).  We are moored in the lock cut so we went to have a look at the weir and were amazed at the amount of water going, well not over but into it.  I’ve never seen a weir like this before. 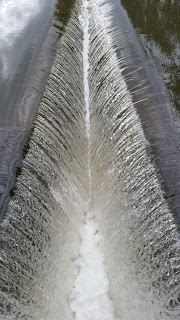