Friday 13th – oh dear what else can go wrong?

We then got an email from C&RT to say that the river was now down on amber.  This was followed quite quickly by another email to say that Woolhampton Lock was now open.

We decided not to leave today as we had heard that there were eighteen boats at Woolhampton and we know that there were five at Thatcham and that doesn’t include the others pulled over on the towpath. 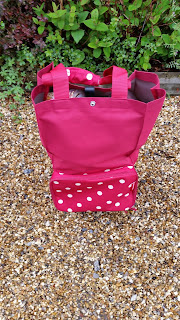 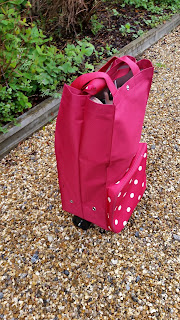 We trundled along to Tesco to stock up.  We are really lucky here as we back onto B & Q, Dunelm is just across the car park from them and Tesco is a ten minute walk.  I thought I would show you a couple of photos of a new acquisition.  I have always thought that a shopping trolley would be a good idea for the boat but we really have nowhere to store one so after some research I found a pink spotted one (which goes with the boat interior!).  It’s great as it folds flat, takes a fair bit of shopping – certainly the heavy stuff – and tows behind nicely. 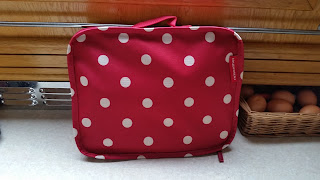 It was then a spring clean for Mary H and big pan of chilli for us.