I need to start today’s blog with an apology to the original house across the river from us which yesterday I said wasn’t very nice.  I had got it muddled up with another one.  This is what it used to look like.
Waterways was originally marketed at £2.3m in February 2013 and reduced to £2 million in the May.  It was sold in the November but I can’t seem to find out how much it went for.  Whoever bought it must have a lot of money to demolish a house worth that much and build a new one!
Today was Richard’s birthday :-)  Victoria came up with some cards and things that I had forgotten to bring with us.  We then met up with friends, Barbara and Phil and had a nice lunch in Thames Court.  We discovered that we can take Muffin inside the pub!  It was then back to the boat for tea and birthday cake. 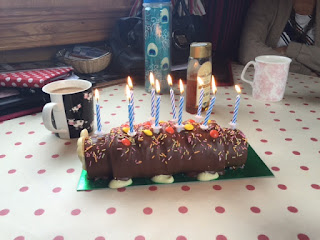 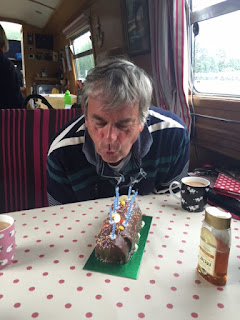 Victoria and I then drove into Walton to do some shopping before she left to go home.

I had a really bad night with my tooth and was worried that something was wrong.  The dentist had told me to ring him if I was concerned so I did but he said that it was bound to hurt for a while after what he had done to me!!  I had mushy food for lunch but Thames Court didn’t have any pasta on the menu which surprised me.   It is a lot better this evening so hopefully I will get a better night’s sleep tonight.
Posted by Linda Gifford-Hull at 11:06