We were away just after 9am as we wanted to get a mooring at Weybridge for a family BBQ.  We didn’t say goodbye to FL and Klara as they were going to drop off some shopping as they passed later.  (Sue was getting an Ocado order).

The river between Pyrford and Weybridge isn’t the most spectacular, its quite urbanised and there are a lot of moored boats.  Under the M25 we saw the MSC Frodsham a replica of a Bridgewater Canal tug.  The original tugs, dating from the 1870s, were steam powered, and they were converted to diesel in the 1920s when they were owned by the Manchester Ship Canal Co. 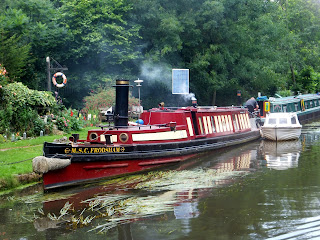 Between Town Lock and Thames Lock there are some wonderful houses – not quite St. George’s Hill but the houses there don’t have a river at the bottom of their garden.  Here are a few photos. 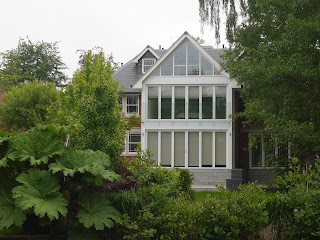 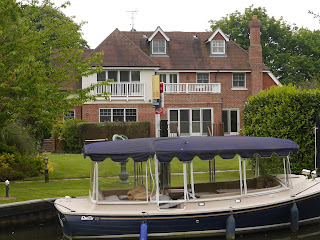 Just before Thames Lock is this lovely old mill which has been converted into flats – I would love the flat at the top with the long walkway/balcony. 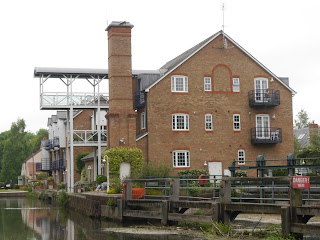 Down through Thames Lock and out onto the Thames – bye bye lovely River Wey for another year.  There was just one space at Weybridge but it was just a bit too short for us as we overhung a slipway which we didn’t think was a particulary good idea.  I was going to ask the boat behind if he would mind moving up but he didn’t look the type to move!  He was already fed up with 60 foot of steel coming too near his motor cruiser!  But it was our lucky day as someone moved further on so we moored up there and have a much nicer view.

I got a message for Sue to say that the Ocado man was delayed in traffic and that it was too late for them to move.  Now the complicated bit!  One of my shopping items was a bottle of prosecco – a birthday present for my cousin’s wife.  Also Sue, Andy and Roly wanted to watch the England v Wales rugby match in Shepperton.  Sue phoned a friend who offered to pick them up and take them to Shepperton dropping off my shopping on their way!  It all worked – I got my shopping and they got to watch the rugby.  We said our final farewells though hopefully we will catch up with them in September.

My cousin, Simon, came to pick us up and take us to their house for his wife, Kate’s, birthday BBQ.  We had a lovely late afternoon/early evening with them and their family.  Simon has a house out in Crete and a lot of the food had a Greek influence – lovely :-)  Mind you poor Kate never stopped all afternoon!  Simon bought us back about 7.30ish.