We left just after 10am.  We were only going to The Anchor at Pyrford where we planned to have a farewell dinner tonight.  We all leave the Wey tomorrow.  We will stay in Shepperton/Weybridge for a couple of days but FL and Klara are going upstream. 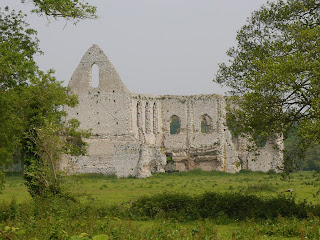 At Newark Lock are the lovely ruins of Newark Priory which actually stands on an island.  It was built in 1312 by the Bishop of Winchester.  During Henry VIII's Dissolution of the Monasteries Newark Priory was dissolved. The prior himself was pensioned off, all valuables sent to the Tower of London and the land given to the Master of the King's Horse. It has been said that a cannon was employed from the top of Church Hill to bombard or demolish what were the then extensive buildings. The building, falling into ruin, was said to have been further destroyed by locals using the stones for road mending until Lord Onslow, the owner in the 1730s, decided to preserve what remained. 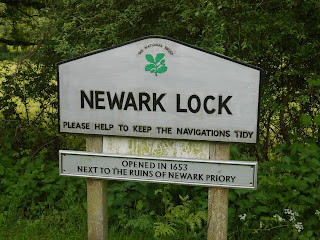 I took this photo to show how old the locks are on the Wey.  It was the second river in England to be turned from wholly unnavigable to navigable for its main town, as it was behind the River Lea; the River Wey Navigation opened in 1653 with 12 locks between Weybridge and Guildford. Construction of the Godalming Navigation, a further four locks, was completed in 1764 connecting a second market town.  It had been used by small boats since medieval times, and some improvements were made to the channel from 1618.

Through Walsham Lock which are the last of the original turf-sided locks opened in 1653 that were common along the full length of the Wey Navigation. I’ve borrowed these two photos from the web to show how it looked today and how it looks when the river is it flood. 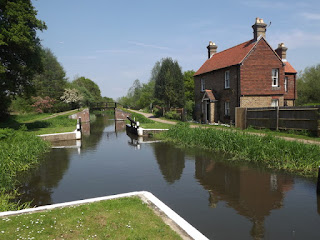 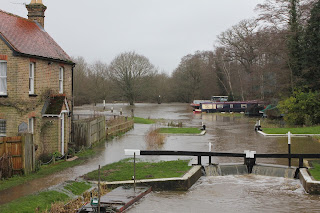 We caught up with FL and Klara at Pyrford Lock so Sue helped us through.  We moored up just after the Anchor.

We spent a lovely, quiet afternoon.  Richard on the rear deck reading and me trying to take a nap.  Some people are so inconsiderate as they walk along the towpath – they just don’t give any thought to people who may be trying to catch a few zzzz’s!

The six of us went to the Anchor for our last dinner together.  The food was OK.  I had fish and chips which, in fact, were excellent.  I deliberately chose something that had some substance but didn’t need chewing!  I felt sad walking back knowing that I will have to say goodbye tomorrow.