Saturday
I think we all slept much better than we did on our first night.
We were up and out fairly early as we wanted to spend as much time as possible in Strasbourg.  We had planned to take the tram but changed our minds as we couldn't work out which way to go!  It was a 20 minute walk into the centre where, as we crossed over the canal into the old town, we found the most wonderful sight.  The houses are amazing and the roofs, which I love, truly wonderful. 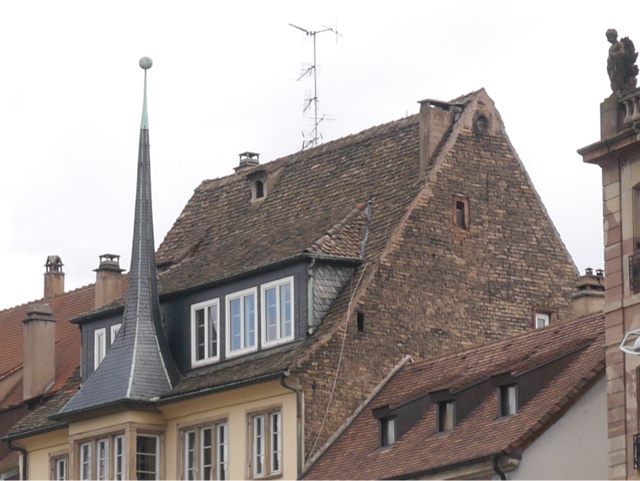 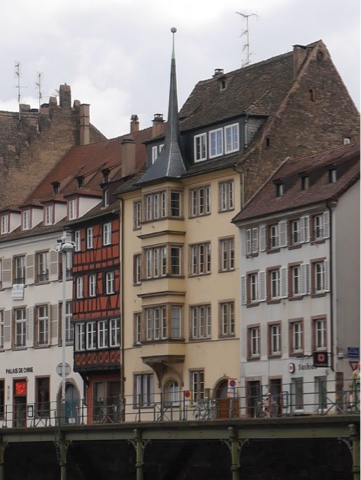 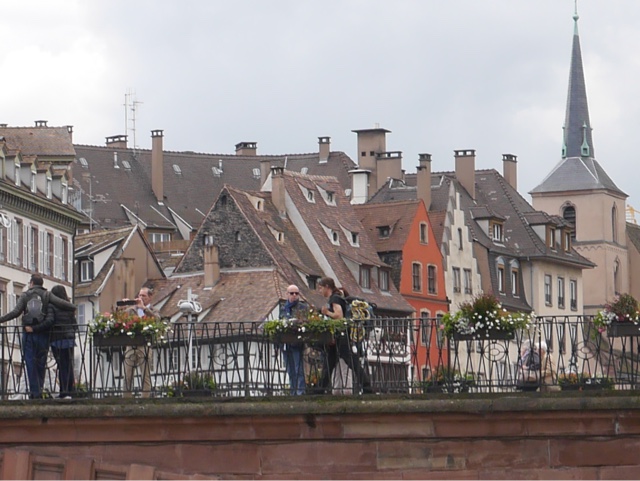 We had decided to take a boat trip so went and booked our tickets for the 2pm trip.  This was what greeted us on the other side of the canal. 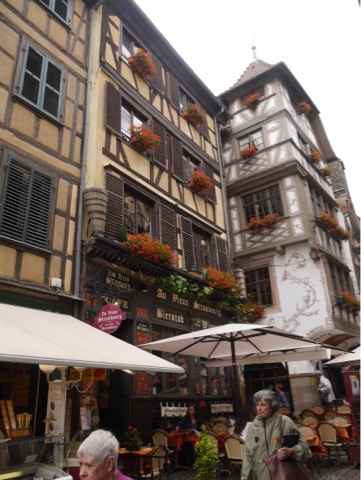 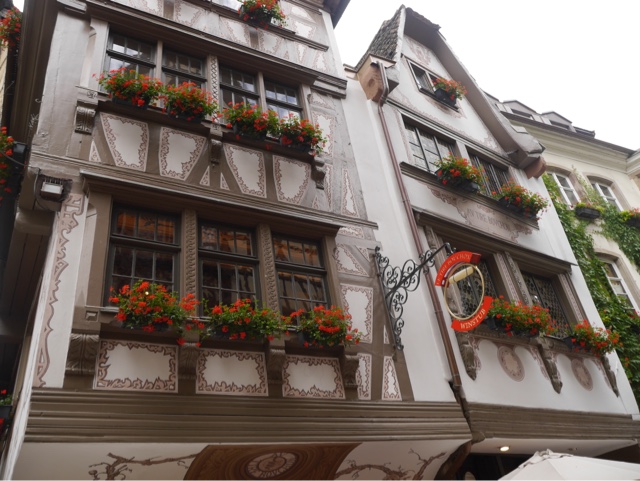 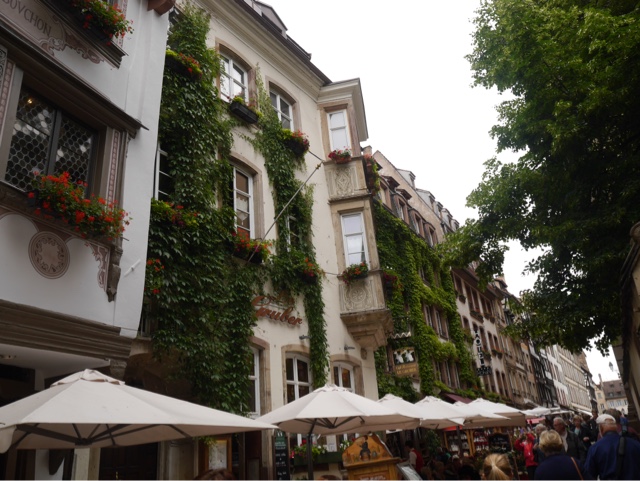 Lunch was beckoning and Le Gruber seemed to fit the bill.  We all chose the same - Tarte Flambes grille et champignons. 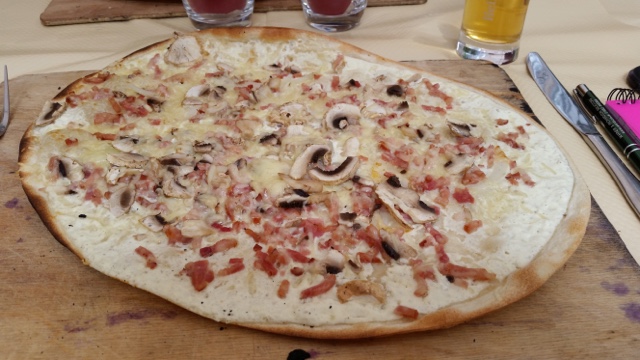 It was then pudding time and a certain person, who goes by the name of Jim, chose yet another Tarte Flambes but this time with apples and calvados.  Sadly it didn't flambé 😕 The rest of us also had puds of course! 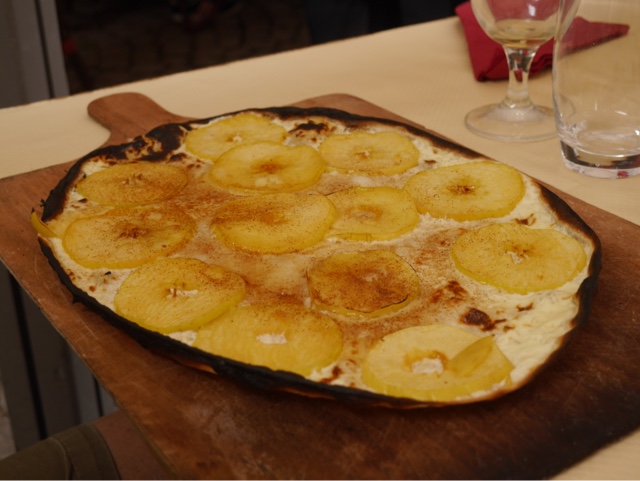 At one stage Penny said that it would be nice to have some music and then, by magic, two street musicians arrived and sat opposite us and started playing!  They were really very good. 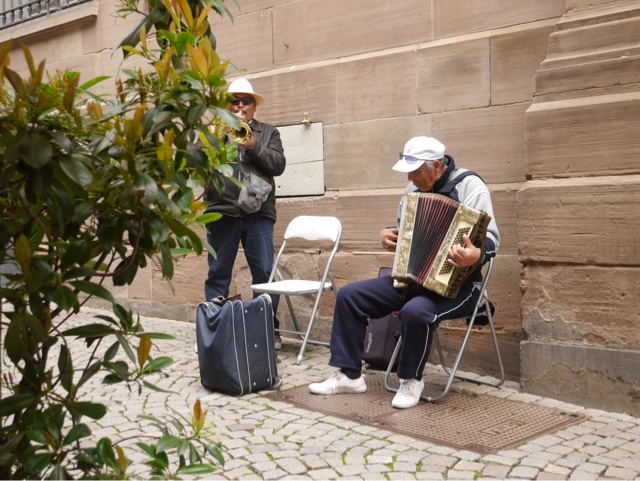 We then walked back to the trip boat and took our seats.  Sadly the audio system for Richard and I wasn't working and then we discovered that the boat wasn't going to do the whole circuit due to strong currents on one of the canals.  Still we got to see some lovely parts of Strasbourg but we weren't able to take any photos because of the reflection in the glass top of the boat. 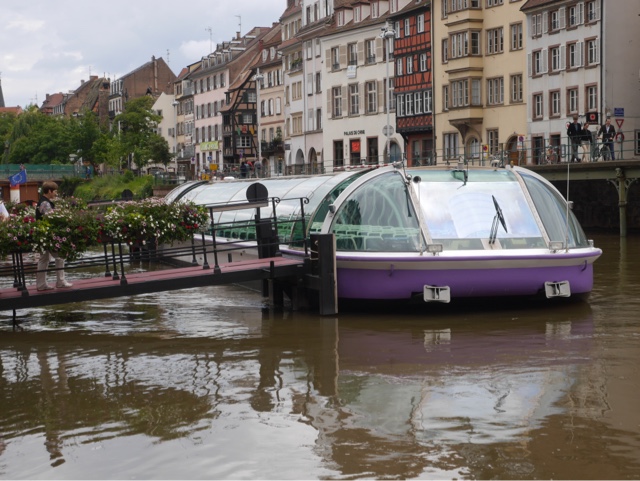 Part of the trip was to go up and see the EU buildings.  As we cruised along the boat appeared to be dragged to the side and grounded on the rocks - some wag yelled "Titanic"!!  As we passed all the EU buildings I wondered if we would still be "European" this time next week.
Back on terra firma be walked to the Cathedral. 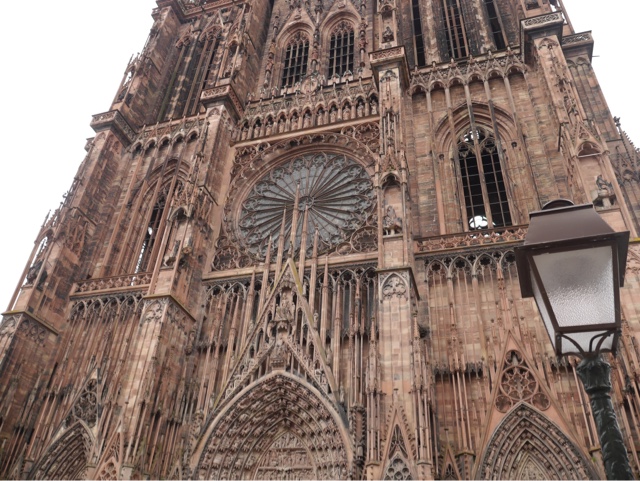 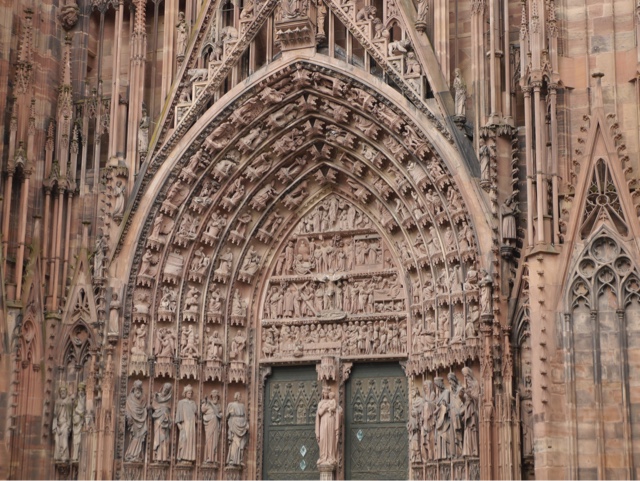 As usual with French places of worship it was very dark but lovely.  The organ was spectacular as was the altar, 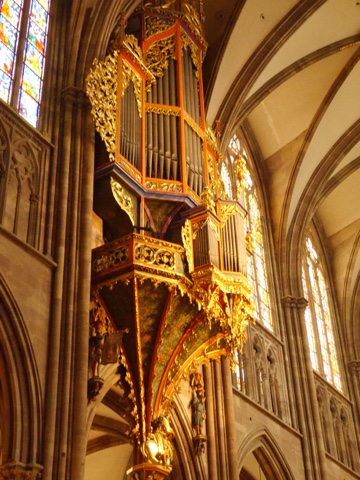 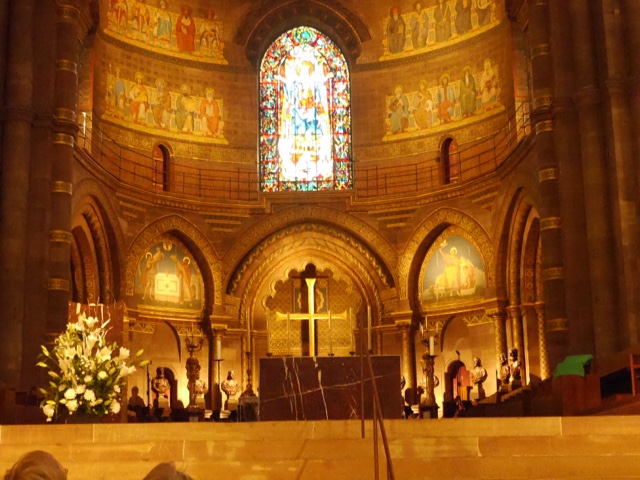 Another amazing item in the cathedral is the astronomical clock.  It is the third clock there and dates from the first French possession of the city (1681 - 1870).  The first clock was built in the 14th century and the second in the 16th century when Strasbourg was a Free Imperial City of the Holy Roman Empire.  The current clock dates from about 1843 and features a perpetual calendar, a display of the real position of the sun and moon plus solar and lunar eclipses.  The main attraction is the procession of 18inch figures of Christ and the Apostles which occurs every day at 12.30pm while the life-size cock crows thrice. 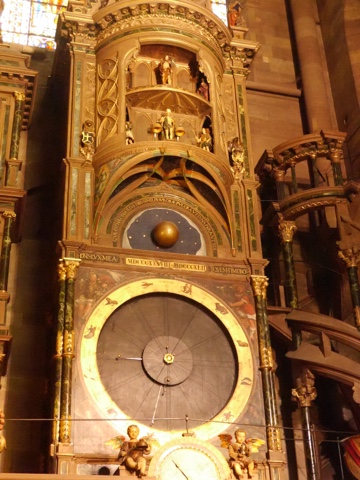 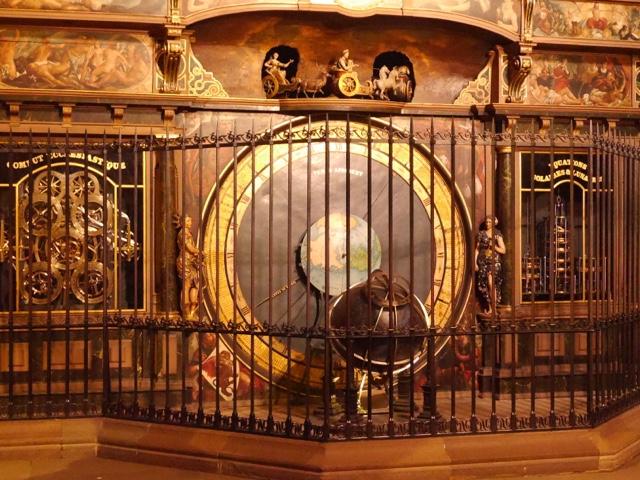 We decided to try and return to the boat via the tram as we knew which stop we needed to get off at!  On our way we came across this bride and groom having some wedding photos taken on a merry-go-round. 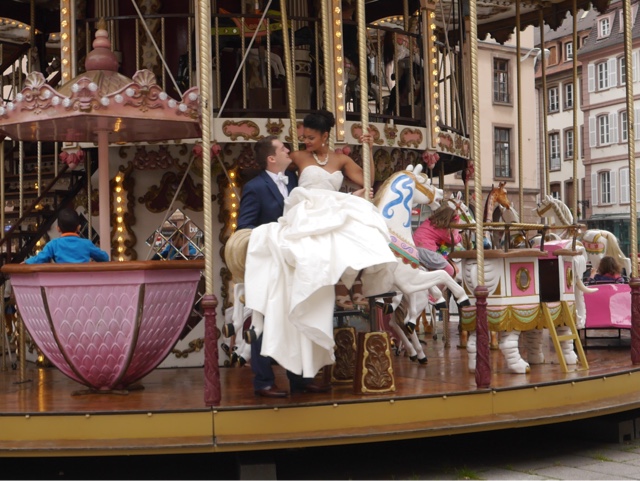 Our trip on the tram was successful and we got back to our stop, Winston Churchill, safely.  As we walked back to the boat I noticed that the tramway was all grass and beautifully mown at that! 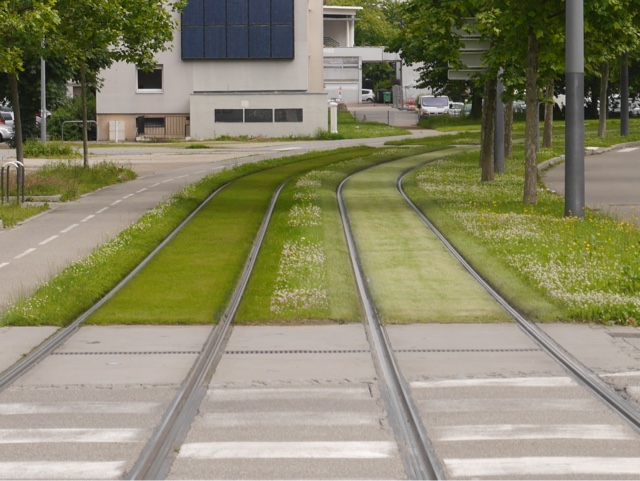 We had a nice quiet evening back at the boat but had to give up watching DVDs on the tiny TV!
Here is a potted history of Strasbourg.  Louis XIV decided that Strasbourg needed to be a part of France and in 1681 his armies took it.  In 1871, after the end of the Franco-Prussian war, the city was transferred to the German Empire.  As part of Imperial Germany, Strasbourg was rebuilt and developed on a grand and representative scale.  The university, founded in 1567 and suppressed during the French Revolution, was re-opened in 1872 under the name Kaiser-Wilhems-Universitat.  Following the defeat of the German empire in World War II, Strasbourg was returned to the French in 1918.  Germany took the city again in 1940 and it was liberated in November 1944.  In 1949 the city was chosen to be the seat of the Council of Europe with its European Court of Human Rights and European Pharmacopoeia.  Since 1952 the European Parlimanent has met in Strasbourg.  However, only the four day plenary sessions of the parliament are now held in Strasbourg each month, with all other business being conducted in Brussels and Luxembourg.
Posted by Unknown at 20:31