It was hard to decide which champagne house to visit as most of them have organised tours.  In the end we opted for Mercier.  I'd been there in 1980 when Mercier was one of the only houses to do tours but now it was a swanky visitor centre which was opened in 1989. 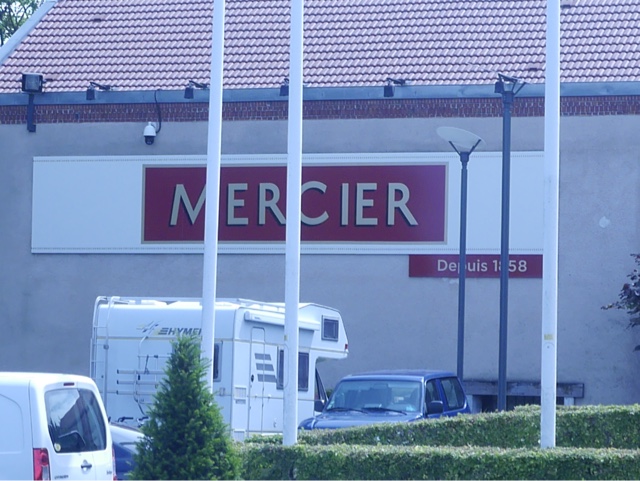 The tour started with a short video using our audio guide then down in a lift to go 30 metres down and onto a little train.  I was rather disappointed as all we seem to do was go through miles of cold cellars with not much in them.  However this tunnel was pretty amazing and is the longest. 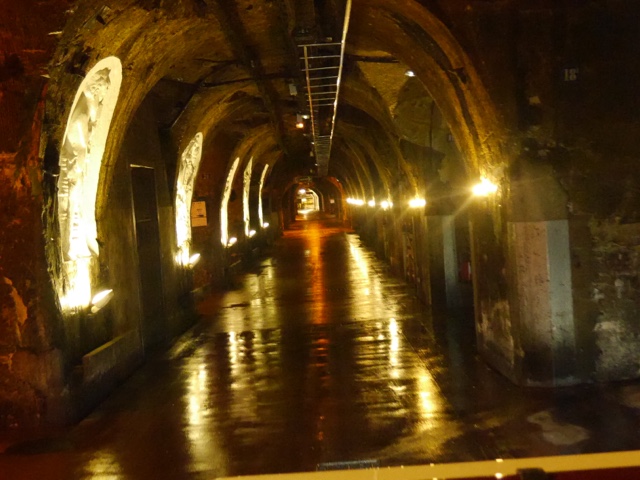 We had hoped to see barrels and maybe some bottling but that is all done at another site.  I felt bad as Penny and Jim had wanted to visit a smaller house but we went to Mercier at my insistence 🙁.  We had chosen the Mademoiselle tour which gave us two glasses of champagne - one white and one rose.  The young man who served us was very knowledgeable and we did learn quite a bit from him about how champagne is made and stored.  As Richard was driving he didn't drink all of his so guess who did - hic! 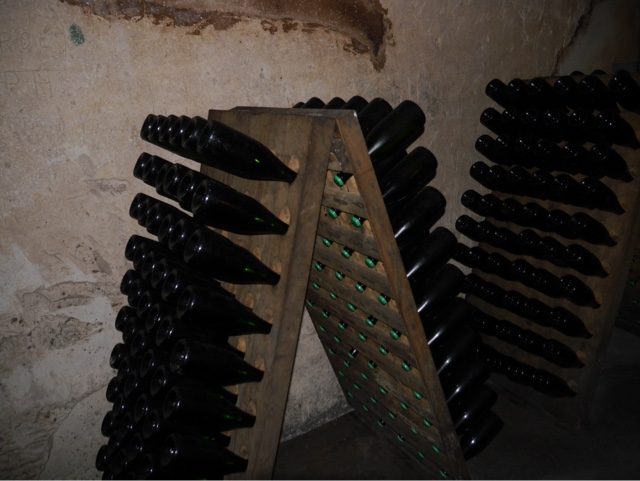 Eugene Mercier decided to built a huge barrel which was built in pieces in. Over four years from Autumn oak when the wood is at its best.   The pieces were taken to Epernay and put together.  In 1889 Eugene decided to take his barrel to the Universal Exposition in Paris.  Weighing 20 tonnes it took 24 oxen and 18 horses to transport it there.  The barrel can hold the equivalent of 200,000 bottles of champagne.  In 1950 there was a rally for Citroen 4CVs in the cellars.  15 cars drove through the cellars and despite slips and slides and competitors trying to overtake each other, not a single bottle was broken! 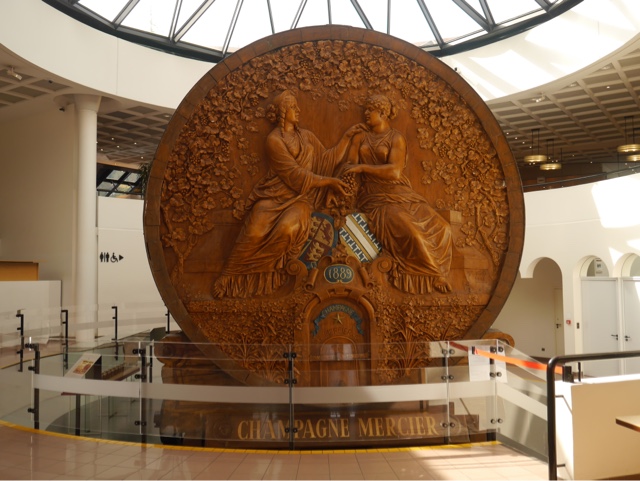 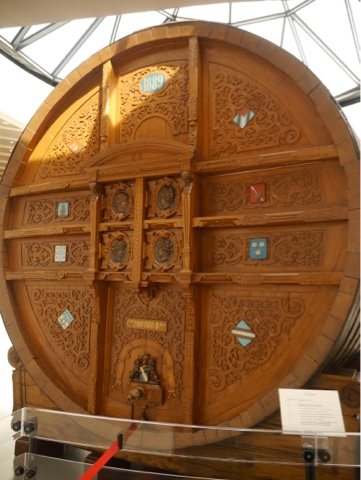 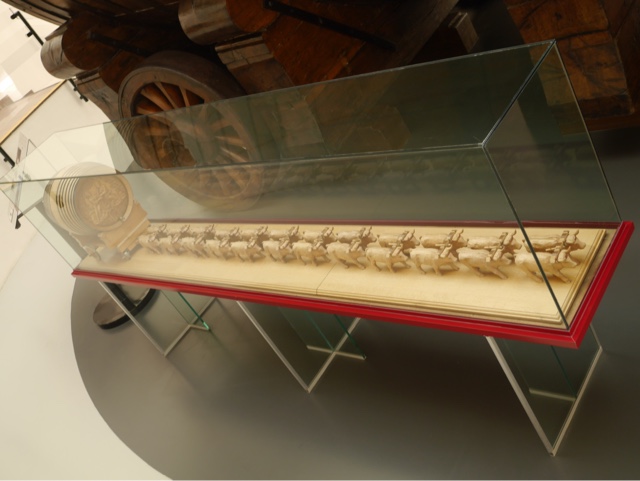 In 1858 when Eugene Mercier was just 20 and with no money, no vines and without being the son of one of the great champagne families, shook up the traditions of the Champagne region by creating a champagne for all occasions.  He dreamt of immense cellars totalling 18 kilometres and his dream came to fruition when, in 1885, they were completed.

Mercier owned the original rights to the name Dom Perignon but sold it to Moët et Chandon in 1927.

Our tour guide took this photo.  She told us to say Mercier but obviously took the photo as we said the letter "M"!  Richard must have decided to do his own thing!!! 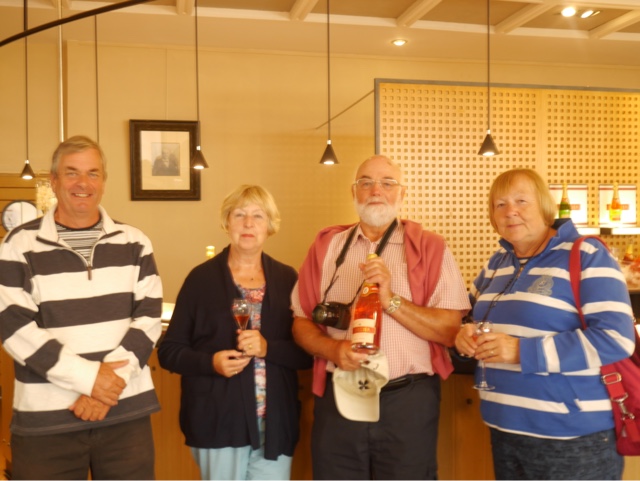 These are all the different sizes of champagne bottles you can get.  Going down in size - Nebuchadnezzar, Balthazar, Salmanazar, Methuslah, Jeroboam, Magnum, Bottle, Demi and Quart. 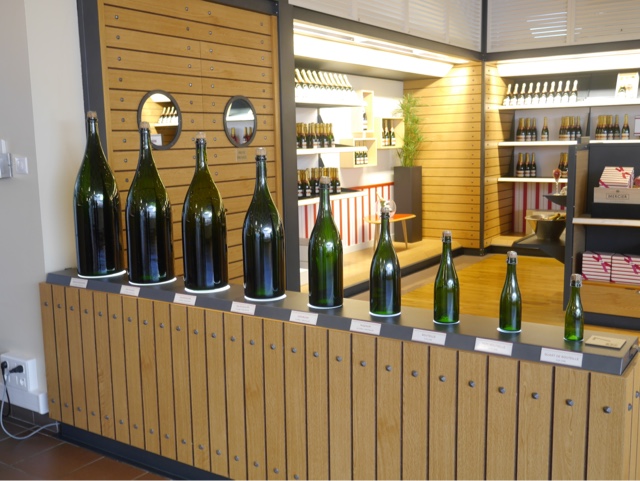 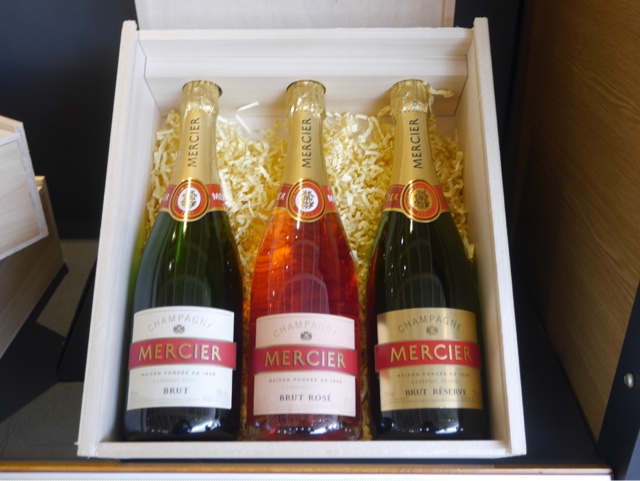 I'm going to write about the how champagne is produced.  If you aren't interested then miss this bit out!

The grapes are picked by hand and pressed.  The musts (juice of the grape) undergo a first alcoholic fermentation in stainless steel vats for one to two weeks which produces clear, still wine.  These various wines along with the reserve wines from previous harvests are mixed together (I guess it's not quite that easy!).  The wine is then bottled and a "liqueur de triage" which is sugar and yeast is added. A second in-bottle fermentation creates the effervescence.  A deposit is formed by the yeast(the lees), which gives the wine complexity during its ageing in the cellar.  These bottles are gradually turned and set at a vertical incline which allows for concentrating the the deposit in the necks.  The necks of the bottles are then plunged into a solution at -28 degrees to trap the deposition the ice that is formed which is expelled when the bottles are opened.   A "liqueur d'expedition" composed of reserve wines is added.  This is called the "dosage".  The bottles are immediately sealed with a cork and a wire cage is applied.

The legislation covering champagne is extremely strict. It can only be produced with 8 grape varieties.  While I theory, any one of these varieties can be used, Chardonnay, Meunier and Pino Noir account for 99.4% of the vineyards bearing the champagne appellation.

After our tour we went into Epernay to get some bread for lunch.  We had a quick look round as we were going to go back in the afternoon for a better one (that didn't happen!).  We all spent a very lazy afternoon as we have a long drive tomorrow.  Penny and I popped to the supermarket to get dinner for tomorrow and we appeared to have run out of wine - AGAIN!