It was a hot night and I had the window over me open.  A couple of German guys had moved in next to us in a camper van - well the snoring that was emanating from it was to be believed!  Fortunately it didn't keep me awake.

We were up, camp broken and we were on our way by 9.30.  We had 204 miles to cover to Rouen - thank goodness it was all motorway though the tolls cost us €33.90.
We stopped for coffee at an Aire and came across these three Belgian classic cars with their caravans. 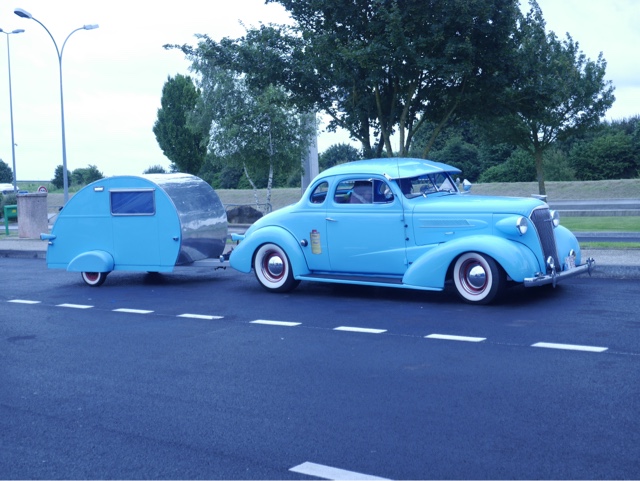 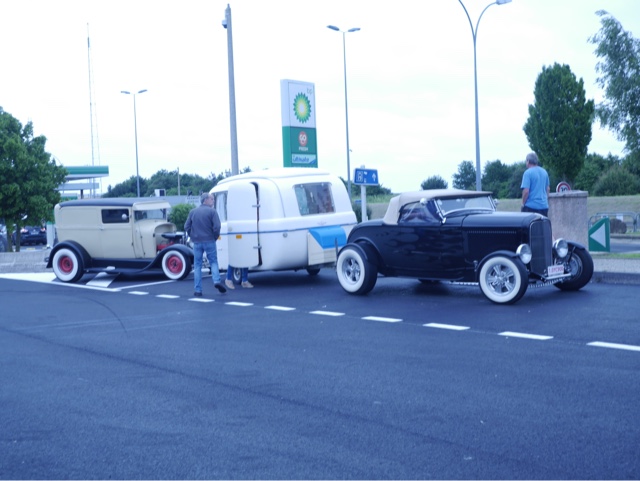 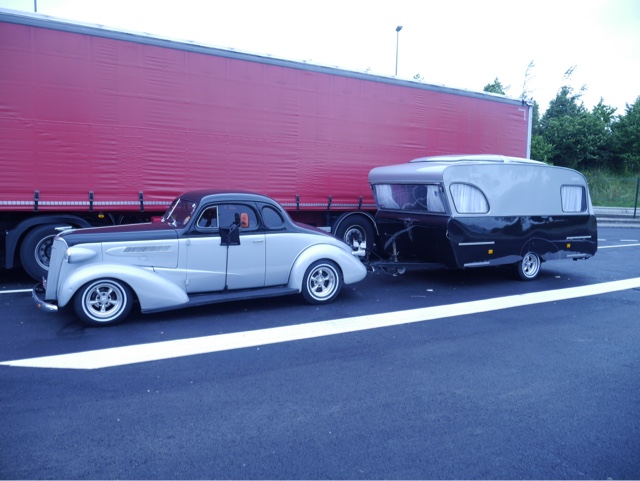 It started to rain when we were north of Paris and it really poured down.  It didn't stop until we passed Rouen.  We came across some road works with count down traffic lights - great idea. 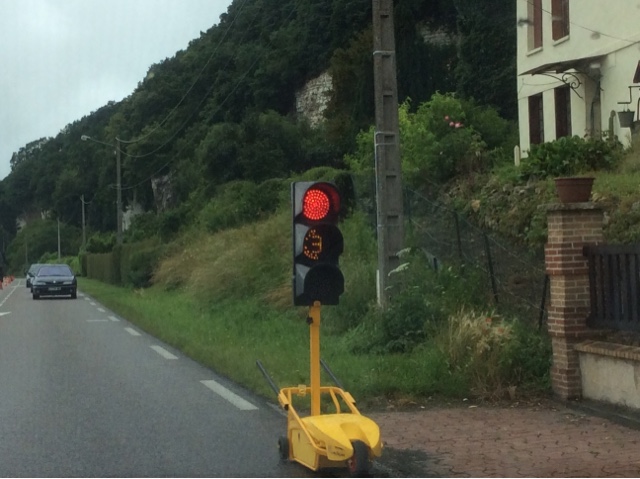 We found the caravan site and set up a "demi camp" as we are only here for one night so it's not worth putting the awning up.  We walked down into Jumieges and came across St. Valentin church.  The earliest part of the church goes back to the 11th or 12th century and was built at the request of the monks at Jumieges Abbey as they didn't want to be troubled by the parishioners!  An extension was built In the 16th century and it looks to me as if there might be a third type of architecture but I can't find any reference to it. 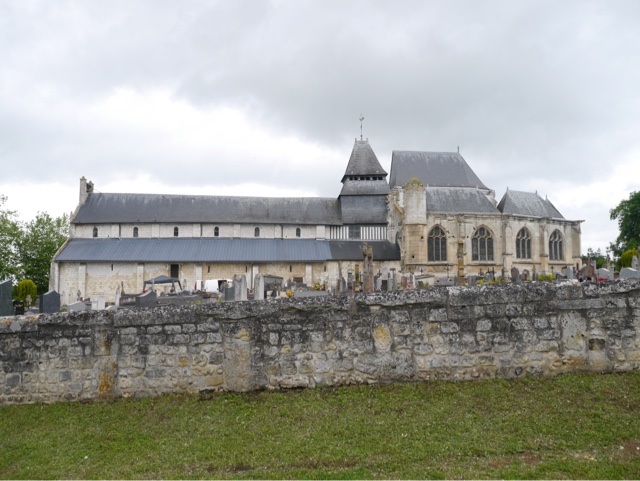 The town of Jumieges is very pretty with some lovely buildings. 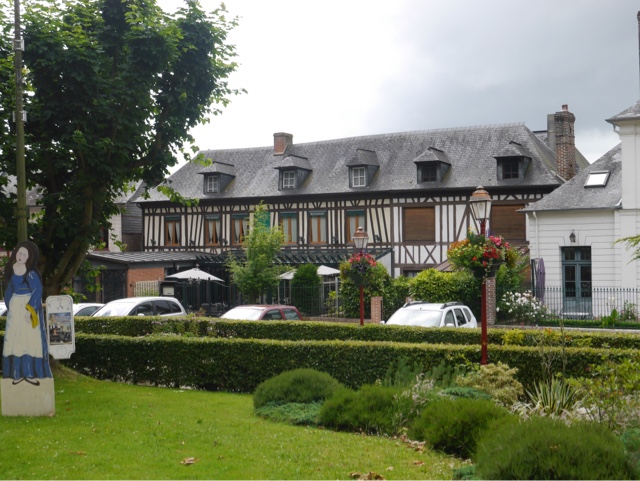 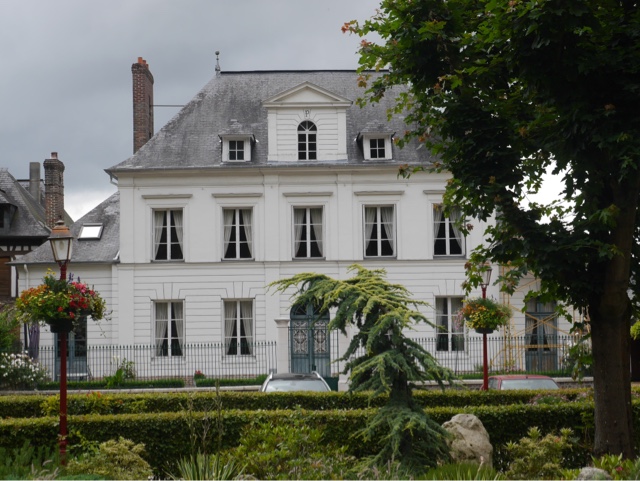 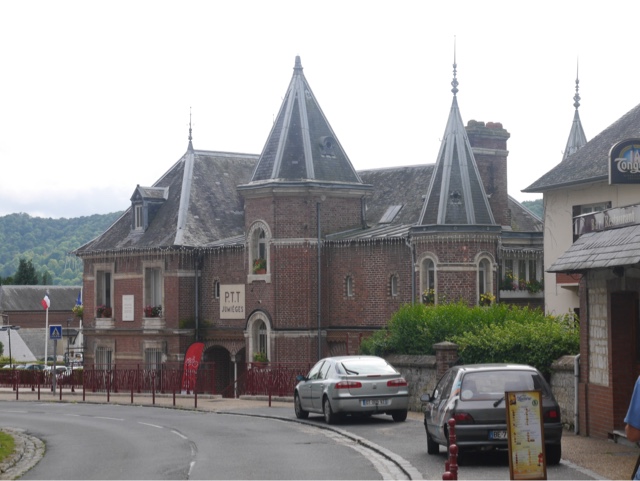 Our prime reason for our walk was to the visit L'Abbaye de Jumieges.  The abbey was founded in AD 654 by St. Philibert but was pillaged and burnt to the ground in the 9th century by the Vikings.  It was rebuilt on a grander scale by the Duke of Normandy and consecrated in 1067 in the presence of William the Conqueror.  It was extended in 1256 and again in 1573.  The abbots of Jumièges took part in all church and state affairs and oneof them, Robert Champart, became Archbishop of Canterbury in 1051, after being Bishop of London. Many others became bishops in France, and some were also raised to the dignity of cardinal.  The fortunes of the abbey suffered somewhat through the English invasion of the 15th century, but it recovered and maintained its prosperity until the whole province was devastated by the  Huguenots and the French Wars of Religion. In 1649, during the abbacy of Francis III, Jumièges was taken over by the Maurist Congregation under whose rule some of its former grandeur was restored.

The French Revolution however, ended its existence as a monastery, leaving only the impressive ruins. Over a period of 25 years it was dismantled for its stone. A gallery of the cloister was bought by Lord Stuart de Rothesay to rebuild it in Highcliffe Castle in Dorset.

In 1852 the abbey was rescued by the Lepel-Cointet family and finally bought by the State in 1946.

The ruins comprise the church, with its beautiful twin towers and western façade, and portions of the cloisters and library, the contents of which were removed to Rouen when the abbey was dissolved. In the middle of the former cloister, there is still the 500-year-old yew tree. 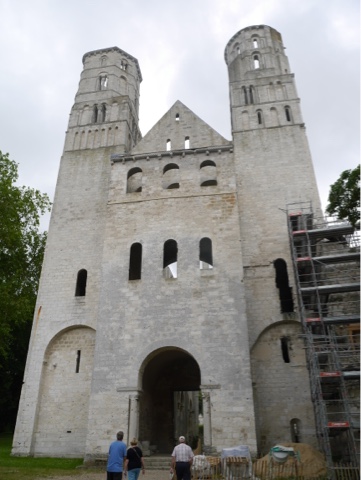 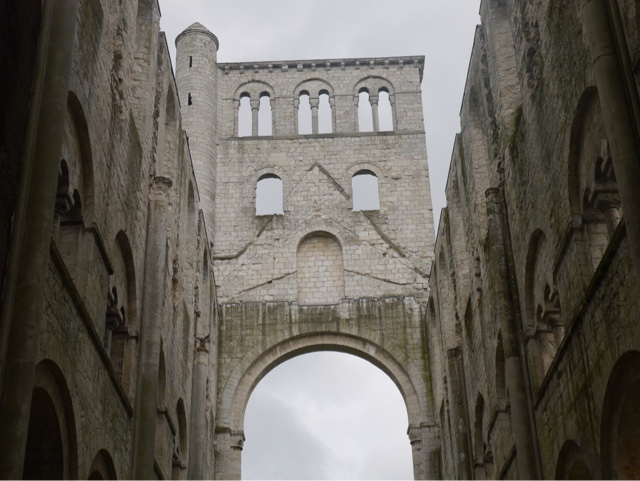 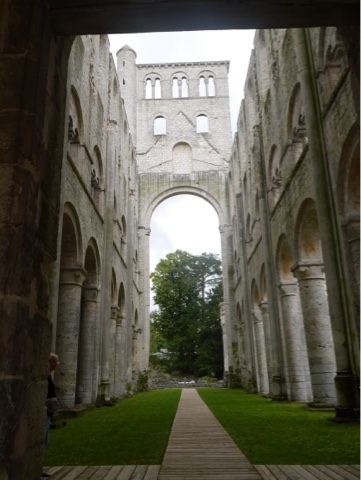 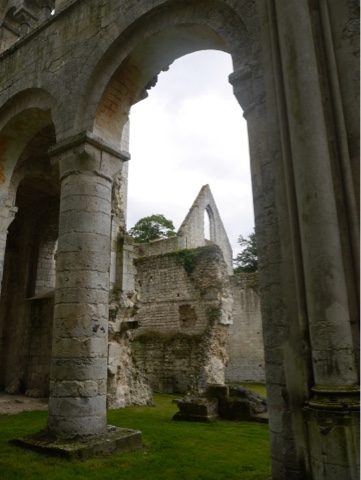 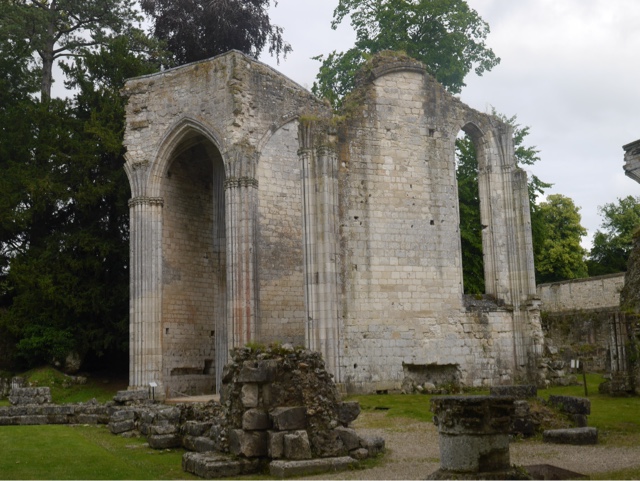 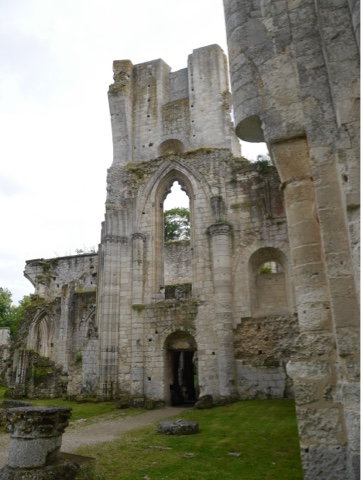 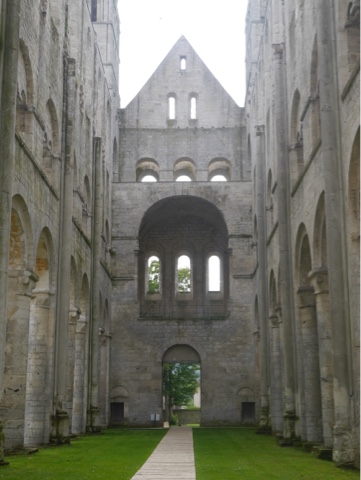 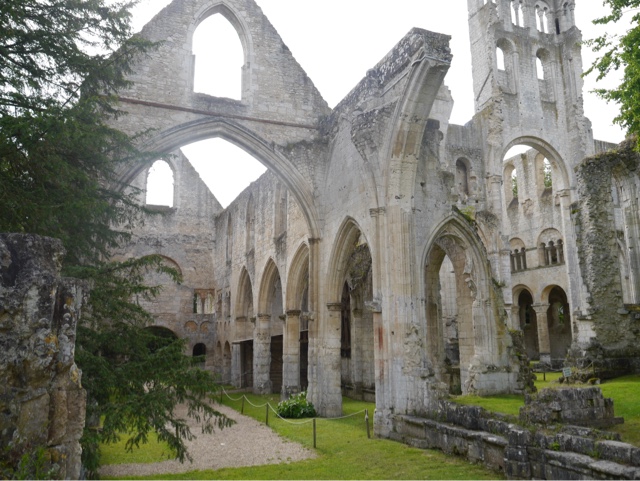 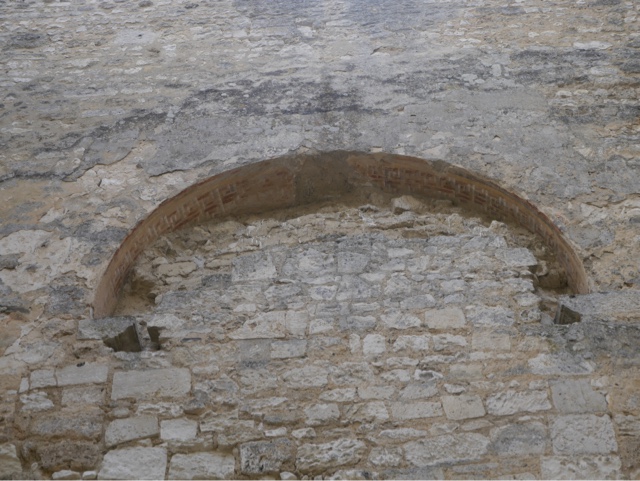 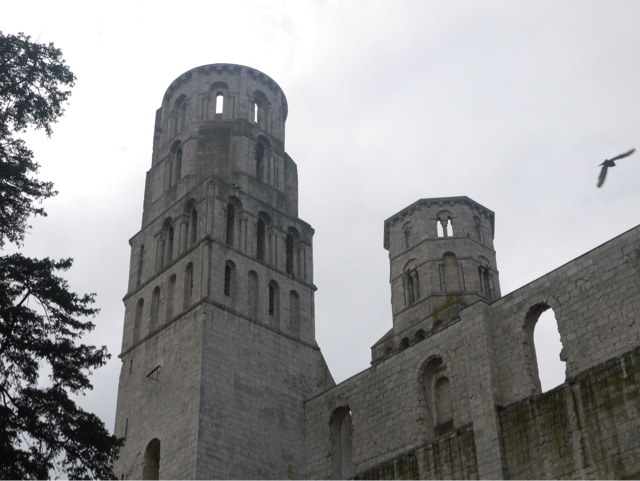 This painting is a rare example of Carolingian painting.  This is the only trace of the monastery before it was destroyed by the Vikings. 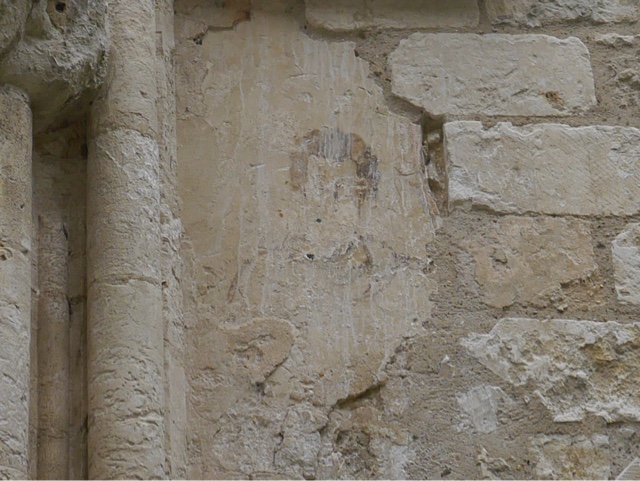 This is the 14th century gatehouse which was modified in 19th century in a neo-Gothic style.  Today it houses the reception, shop and apartments for the Lepel-Cointet family. 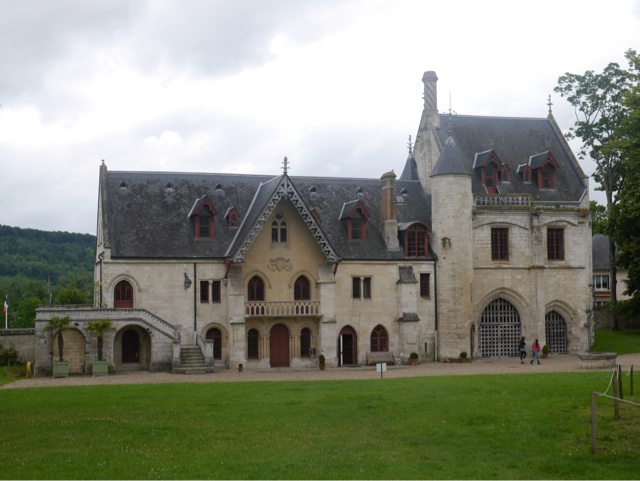 As we started to walk back it began to pour with rain so we took shelter in a bar.  ONE strong beer later we lost the will to cook so ended up in a small restaurant eating gallettes and crepes!!
Posted by Unknown at 08:05