A lovely bright and sunny morning though the wind was still blowing but not as much as yesterday.

At Aston Lock Muffin found another Cockapoo and had a lovely game of chase – round and round in ever decreasing circles until one would fall over the other!

The wind got quite strong at times and as we ascended Lock, which is almost 11 feet, I really felt it!

We are finding the T & M very busy after being on the Leicester Line and the River Soar.  Yesterday, at Derwent Mouth Lock, there were 6 boats waiting.  At each lock we have to wait while someone goes up and another down. 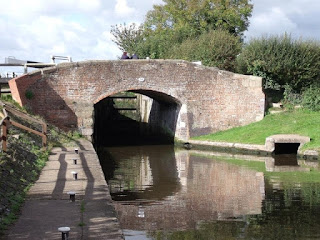 After Swarkestone Lock we stopped for lunch but never moved on.  It was a lovely afternoon though windy but the wind cooled the sun down and made it very pleasant. 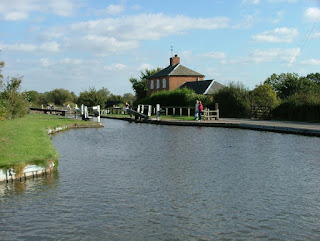 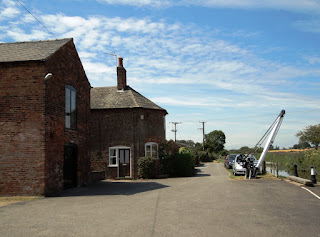 Just above Swarkestone Lock is the old Derby and Sandiacre Canal which ran from the river Trent and climbed through 3 locks to the T & M and then on to Sandiacre on the Erewash canal, with a line to Little Eaton where it met a plateway.  There was also a branch to the river Derwent in the city centre, which enabled boats to reach the Silk Mill and the mills and foundries further up the river to Darley Abbey.  There were 9 locks on the main line, 5 on the Little Eaton line and one on the river branch and they were built to accommodate Trent barges, the dimensions being roughly 90ft. long by 15ft. wide with varying depths. Of the total, 6 are still in existence, albeit buried. The 3 locks at Swarkestone fell into disuse early on and are buried in the garden of a house in Swarkestone.  The basin is now used as moorings.

Michelle and Aaron have two miniature schnauzers, Ollie and Oscar.  Muffin was quite wary of them to start with but is now becoming one of the pack.  This is photo is entitled MOO.  (Muffin, Ollie and Oscar!) 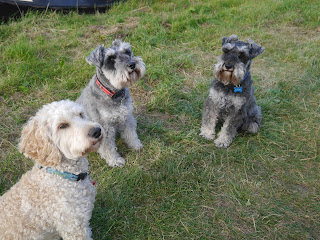 We had a quiet afternoon, everyone doing their own thing, before having a BBQ.  The wind was not really conducive to barbecuing on the towpath so, as Aaron has a gas BBQ, it was set up under the pram cover on Mary H.  We had a lovely evening though we all got a bit cold at the end! 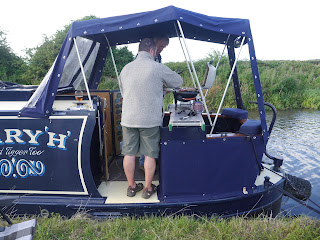 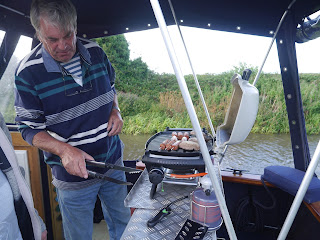 I have said before that Trinity has quite an imagination.  I would love to know what she was doing in this photo. 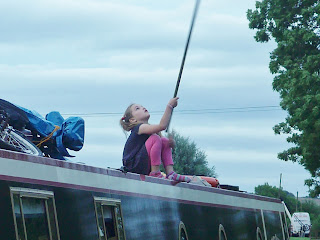