It rained quite hard in the night so we were in no hurry to get up as it was still drizzling.  We finally got under way about 10.30am.

Down through Zouch lock and back out onto the river and the anticipation of seeing one of my favourite places on the waterways.  This is the third time we have been on the Soar and each time I have tried to find out something about the house but to no avail.  Well this year I have!  It’s called The Hermitage and is up for sale.  It appears to be under offer and was on for £750,000 - which I reckon is cheap!  The house has an interesting and varied past, having been previously a religious retreat, from whence it derived its name, and then latterly a hunting box.  It has been owned by the same family for 48 years. 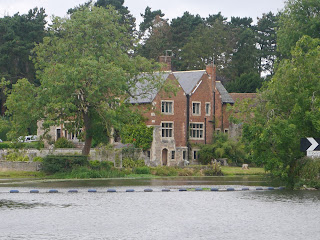 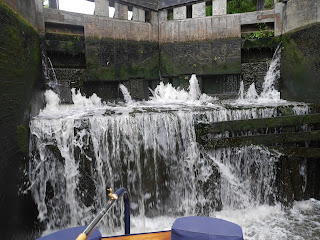 At Kegworth Shallow Lock there are the remains of a second lock. 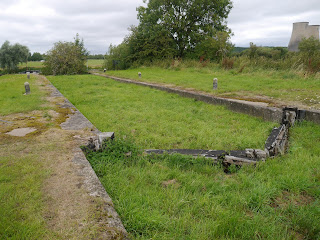 As we were pulling onto the lock waiting at Radcliffe Lock there was a horrible noise and the propeller stopped going round.  Richard looked down the weed hatch and could see a piece of wood jammed on the prop.  Fortunately, he turned the prop backwards and the piece of wood fell off – phew!

Before we knew it we were on the River Trent and heading west towards Sawley. 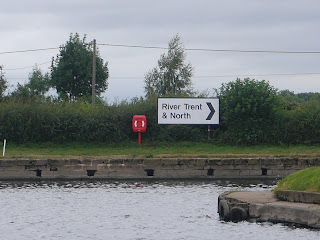 Up through the Sawley locks, where there were volunteer lockies on duty, and then we headed for the Trent and Mersey Canal.  Aaron took this photo of us – can you see us??  You might need a magnifying glass! 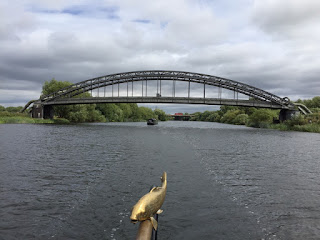 We met up with old friends, Carol and George on Lazy Dayz at Derwent Mouth Lock.  We haven’t seen them since 2012 when they organised a short term mooring for us at their boat club in Doncaster.  Our paths haven’t crossed since and sadly they just literally crossed today as they were going in the opposite direction.  Nice to see you again though Carol.

Shardlow is a pleasant place with a basin just before the lock with a large warehouse which is now a pub though from where we were you wouldn’t know it as a huge weeping willow covers the front. 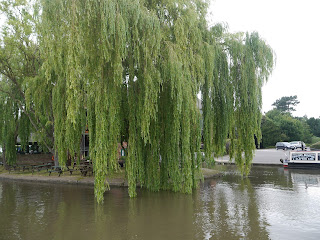 Alongside the pub is the Shardlow Heritage Centre. 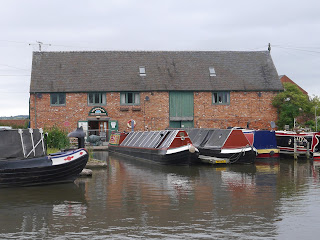 The bow on the left of the photo is that of Dove, a Fellows Morton & Clayton boat.  She was built in 1925 by W. J. Yarwood and is a narrow boat of iron construction with a steel bottom. In 1949 she joined the British Waterways maintenance fleet.  She was sold in 1970 and converted to a trip boat in Birmingham Gas Street and named BRITANIA. In the 1980s she moved to Rickmansworth and was used as a houseboat. Eventually she fell into disrepair until, in 2006, she was bought by her present owner and restored to her 1925 condition. She is one of a few remaining boats built as a diesel power vessel but with the steamer design hull. 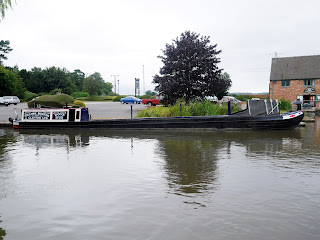 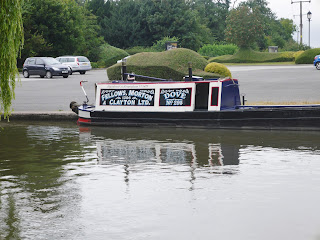 Up through Shardlow Lock, passed the long term moorings and then we pulled in.  We can hear the traffic noise from the A50 but we were tired and needed to stop.  It was too cold for any socialising on the towpath tonight.
9.82 miles
10 locks
Posted by Linda Gifford-Hull at 10:00