A new month and now only 8 weeks left before my first grandchild makes his appearance – unless he comes early :-)

We pulled pins just before 10am and cruised up to Weedon Bec to top up on the fruit and milk.  There is a Tesco Express in the village now.

In 1804 the British Government wanted somewhere to hide King George III from Napoleon.  They chose Weedon Bec and built an arm along with barracks and a Royal Pavilion.  The arm led into the barracks through a portcullis.  Of course Napoleon never made it the Britain so George never had to use his pavilion.

We passed this boat, high and dry at Weedon Wharf. I love the bushes growing out of the cratch! 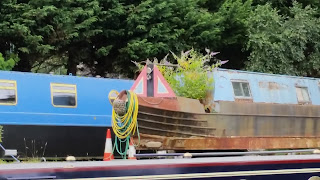 It took us 1 hour and 22 mins to do the first 6 locks of the Buckby Flight.  We waited at the bottom for about 20 minutes to see if anyone came along to share with but we were Billy No Mates :-(  There were lots of boats coming down the flight which was helpful except that one lock got turned just as we were coming out of our lock – they said they didn’t see us!  We stopped before the top lock as so often there isn’t any mooring above it and rain was forecast.  In fact, no sooner had Richard put the pram cover up than it started to drizzle which then turned to heavy rain. 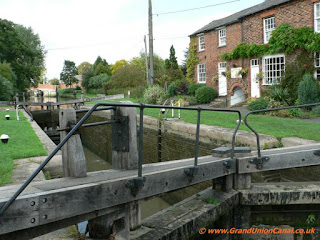 I was down below when I heard a toot toot – I looked up and saw NB Harnser going past.  Brian had thought that he would pass us today and he was right.  There was just time, as he passed, to say hello and how are you.

I have just discovered that James Brindley, the great canal pioneer, was born in 1716 and a new exhibition marking the 300 years since his birth has opened.  When Brindley sought Parliament's backing for his plan for an aqueduct over the River Irwell in Lancashire, he apparently employed a novel means of gaining their attention.  Taking out a block of Cheshire cheese he carved out a model of the waterway he hoped to build.  Apparently it's not clear if he cut it into pieces and put it in water to illustrate how waterproof troughs worked or if he carved arches to show how an aqueduct could work.  Another story is that he took a lump of clay and bashed that into shape – but I like the cheese one best!  The resulting Bridgewater Canal, opened in 1761 and considered to be the first "true" canal in England.  The exhibition is at the National Maritime Museum in Ellesmere Port.