Another lovely day.  We pulled pins at 9.30am and headed on south.

We passed Huddlesford Junction where the Wyrley and Essington Canal (known as the Curly Wyrley) used to run to Ogley.  The canal was authorised in 1792 to transport coal from mines in Wyrley and Essington to Wolverhampton.  The Wyrley and Essington Canal, including the junction, opened on 8 May 1797, but traffic was a little intermittent at first, as the locked section was often short of water. This was compounded by the failure of the reservoir at Sneyd in the summer of 1799, but resolved once the reservoir at Cannock Chase was completed in 1800.  The Wyrley and Essington Canal became disused to the east of Ogley Junction and was abandoned in 1954. Restoration works have been underway since 1990, spearheaded by the Lichfield and Hatherton Canals Restoration Trust who have been actively engaged in excavating and rebuilding sections of the canal. The canal is now called the Lichfield Canal and the Trust aims to have the restoration completed by 2026. Currently only a small section from Huddlesford Junction to Cappers Lane Bridge is in use as moorings for the Lichfield Cruising Club. 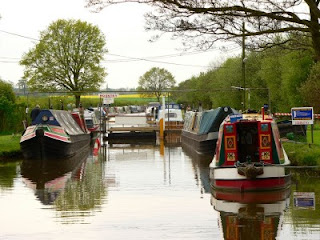 We had wanted to use the services at Fazeley but there was someone on it and another waiting.  This is another service place where everything is on the offside and only room for one boat however we breasted up and dumped an elsan cassette.  We then moved across the canal to where there is another water point!

We went straight on at Fazeley Junction – we haven’t gone down the Birmingham and Fazeley before – in fact there is a lot of the BCN (Birmingham Canal Navigations) that we still have to do but neither of us are sure we really want to do them. 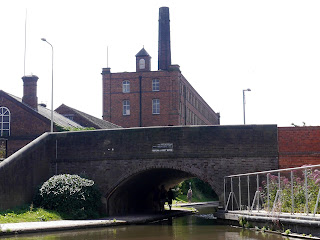 There is an aqueduct over the River Thame.  Apparently the Tame often rises quite substantially and these arches can disappear in time of flood.  The River Tame is the main river of the West Midlands and the most important tributary of the River Trent. The Tame is about 59 miles from the source at Oldbury to its confluence with the Trent near Alrewas, but the main river length of the entire catchment, i.e. the Tame and its main tributaries, is about 180 miles.  The first two photos are mine and the third is from Wikimedia Commons. 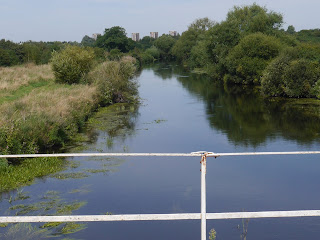 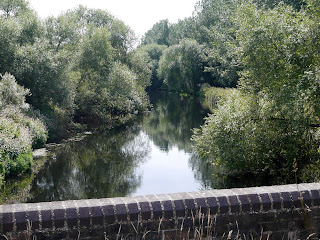 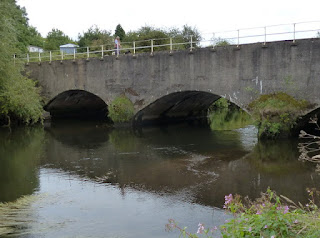 There was one boat waiting at the bottom of the two Glascote locks so it didn’t take us too long to go up. 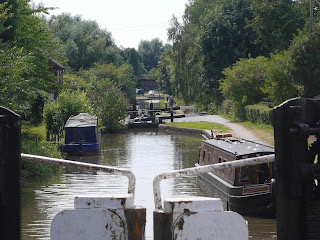 Just before bridge 73 there is a very handy Co-op which needed visiting for milk.

I sat in the cratch for a while – our cratch isn’t very big and quite uncomfortable but it was such a lovely day that I didn’t mind getting a numb bum and pins and needles in my right foot!  It was very interesting passing suburban houses.  I guess from the front they all look the same but from the canal they are all so different.  Some people have made very good use of their watery bottom of the garden where other have just fenced it off and left it wild.  I wish I had taken some photos.

Through Polesworth which was renowned in working boat days for the boatyard of Lee and Atkins.  The yard gained a reputation for its distinctive style of “roses and castles”

We had agreed to moor up at the bottom of the Atherstone flight so that we can make a quick getaway in the morning.  In fact we got there first as Aaron was filling with water.  It was another warm evening.