Thankfully the wind did die down through the night though it was a tad breezy this morning.  The summit pound is 412 feet above sea level.

We pulled pins at 9.45am and continued on.  The summit pound is 20½ miles long and, at time, a little boring as it is very overgrown.  However, there are some lovely mooring places and I could quite happily stay up here for a while but, as ever, our plans don’t really allow for that.  A day off here and there is fine but we really do need to keep them for a rainy day or some other problem.  We have 31 days to do, what Canal Plan says, is 21 days and that is only at 5 hours a day so we are “quids in”!

Apparently we crossed over a very small River Avon (Warwickshire) on an aqueduct but we couldn’t see it.  It then wends its way to Stratford-on-Avon and out onto the River Severn.  It’s one of my favourite rivers.  Its source is at Naseby which is about 4 miles from Welford. 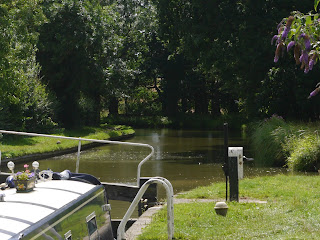 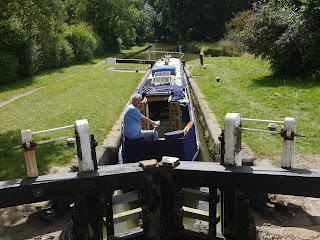 We turned down the Welford Arm following another boat.  The arm is quite narrow and overgrown and a little shallow in places but we were OK.  There is one lock on the arm and when we got to the it the skipper of the other boat was working it though he was filling it instead of emptying it!  I said that I was rather confused as to why he was filling it and he suddenly realised what he was doing!  He said that he had been boating for 40 years and never done anything silly like that before!  I guess it can happen to us all!

We came to Welford back in 2013 with Ferndale though I seem to remember it wasn’t a very nice day but we did have a good Sunday lunch in the Wharf Inn.  It is a lovely place though mooring is at a premium – we were fortunate enough to get a good place. 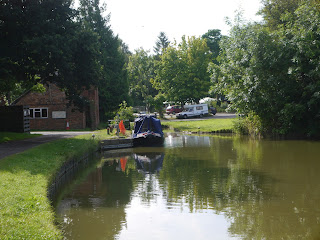 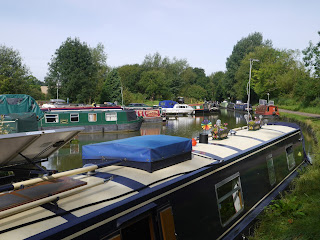 It drizzled then rained but cleared up in time for us to go to the pub for a meal and very nice it was too.

The Welford Arm was dug to feed water to the Leicester Line but a certain amount of trade developed and coal was still being brought to Welford at the end of WWII.  It then fell into decay and it re-opened in 1969.
Welford is halfway between Northampton and Leicester and was formerly an important stagecoach stop.