We left Welford and went down the lock.  It was then a straight 8+ miles to the top of Foxton Locks where we planned to stop for the night.  We were the last boat on the moorings.

We passed this gypsy caravan parked up in a field with a van beside it not a horse.  Note the solar panel on the top!  (Sorry it’s not a very good photo). 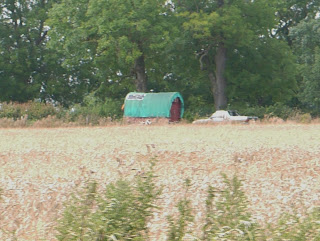 We locked (the key type of lock!) up the boat and went to walk down to the bottom of the locks however it was so busy with gongoozlers that we realised that there would be little peace and quiet there.  There were three boats coming up so we put our names down to go down.  We had a wait of about    before going into the top lock.  I have never seen so many people around – adults and children all vying to help open and close the lock gates.  I thought at one stage there might be a fight between two young boys!  The lockie did all the paddles and I supervised the opening and closing of the gates until the bottom two locks which I was allowed to do on my own – well with my happy band of helpers!

Richard took the following six photos.  I’m really quite impressed with the third one with the view out of the lock. 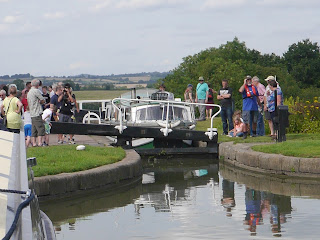 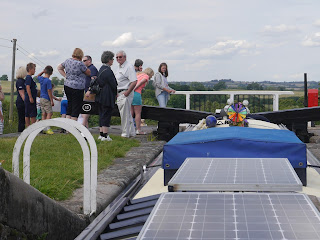 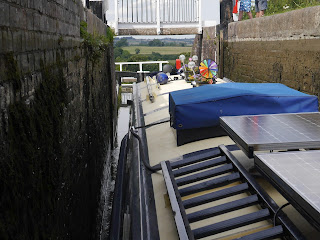 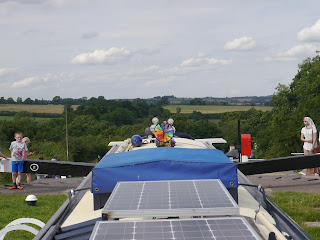 I like using the Pearson’s guide and had to smile at a sentence in there about Foxton Locks.  It’s exactly how I felt.  “The inland navigator plays a walk-on part in Foxton’s soap opera, and is expected to respond cheerfully to bizarre questions and fatuous remarks with the amused tolerance of a Gulliver amidst Lilliputians”! 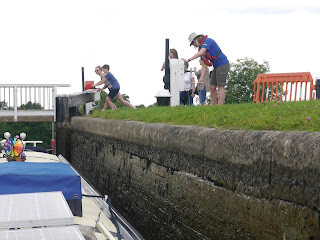 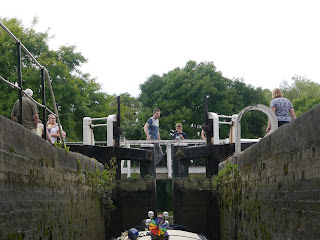 We thought we might stop at the moorings at the bottom of Foxton Locks but in the end we carried on to where we had moored three years ago with Ferndale however it was all so overgrown that we decided against it and moored on the towpath side.  The first photo is three years ago and the second is today. 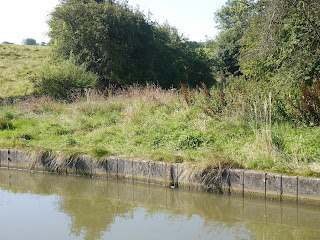 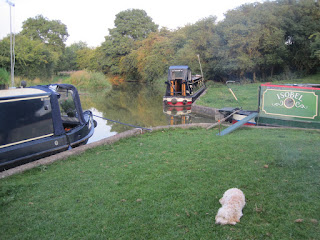 We had given Muffin a shower while we were at Welford but tonight he found some dry fox poo and rolled in it – another shower was to be had!  While we going down Foxton Locks Richard put Muffin on the roof – something that we haven’t done since he was a puppy.  He seemed to enjoy it as at least he could look around him instead of being in the bottom of the lock. 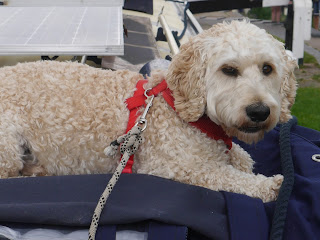