We decided to have a quiet day now all our visitors have gone.  The sun shone though it was still chilly.  I caught up with the blog – I am now up to date and also with emails.  We have now planned our journey home and as there were originally two different ones, both with hotels booked, I needed to cancel some of them.

We went to Blue Sea Villas, who this apartment is booked through, and arranged to leave on Sunday instead of Saturday – well we were a day late getting here.  It was then up to Comsum, the supermarket in the Parque Commercial, where they sell a litre of Gordon’s gin for €11 which is about half of the price in England (when it’s not on special offer).  I bought 2 bottles – making 3 in total to go home!  Richard does like his gin!

On our way back to the apartment we went up to La Parata and when I say up I mean up!  The hill up is very steep and I would imagine way beyond the normal person’s capability to walk up!  Back in the early 1980s my mother and step-father, Richard (known as UR to save complications) used to stay in a villa up there.  It belonged to someone that UR worked with.  Back then, Mojacar Playa didn’t really exist – there were just a few hotels and not much else.  La Parata wasn’t very big either but now there are lots of expensive villas up there and we have been told that many of the owners are very wealthy and include a couple of top footballers.  The letting agencies have the odd one or two up there.  UR had given me directions of where Villa Binnie was but I’m not sure that we found it as I couldn’t find a name on the one we thought it was. 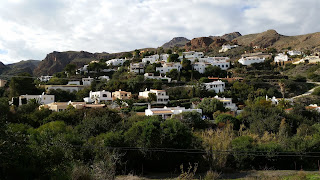 Back at the apartment I cooked roast pork and roasted vegetables.  However I forgot that a non-fan oven works differently and we ended up with uncooked pork and burnt vegetables!  The apartment smelt of burnt food all evening!

I thought I would add some statistics about Mojacar – well this is for a normal year!

Poor Mojacar had real serious rain in September, November and December.  I took this article from the Euro News

In the aftermath of the torrential rainstorm that battered Mojacar, a massive effort has been made to reinstate some semblance of normality to the promenade of Mojacar Playa.  Thursday’s storms caused flooding and electricity in the area was severely affected with Mojacar Pueblo and The Parque Comercial intermittently cutting out until 9am. The destruction of general water pipes on Mojacar Playa and surrounding areas left a large number of residents without mains water for almost two days.  Many houses suffered considerable damage with outside walls collapsing and serious flooding. Residents had to resort to using water from private swimming pools in order to be able to start the clear-up.

I also found this on The Watchers

Although initially it appeared there were no fatalities in the province, the body of a 65-year-old man from Bédar was found on Tuesday, after he went missing after leaving a bar in the town in heavy rains on Saturday. 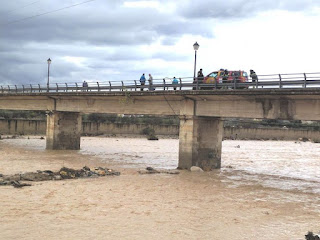 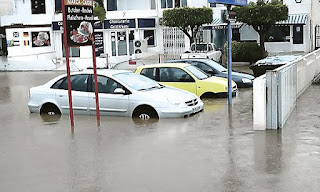 Thank goodness we didn’t arrive until January!
Posted by Linda Gifford-Hull at 09:54