Market day in Turre but first Muffin had to have his exit check at the vets to make sure he is fit to travel and to have a tapeworm tablet.  He was very good and even took the pill without too much trouble.  While we were in there we saw a greyhound bitch with puppies in the nursery.  This is very sad story with a happy ending – read about Vera here. 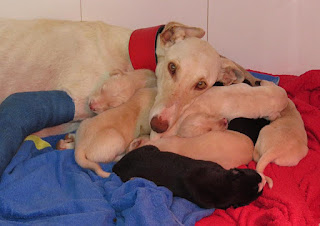 We then walked through the market to check if my purse had been handed in but of course it hadn’t :-(  I bought a couple of things but no fruit or veg as we are off home on Sunday.  The wind got up and it looked as if some of the stalls might take off!  We met up with gang at the Indian restaurant for tapas before heading back to the apartment via the most amazing shop.  I mentioned once before about the Euro Market however this place is similar but HUGE!  Richard need a new electric razor so I wandered round – I was a little concerned that we might never meet up again!  It’s probably just as well that we found the place just as we are about to leave otherwise I might have spent a fortune in there!

I did some sorting out and packing in the afternoon – it’s more or less just the clothes left to pack now.

In the evening we met the gang, minus Bev who was unwell, at the La Cabaña for our last dinner and then moved on to the Emerald Isle where there was live music.  Ashley and Dainius are great musicians and played our type of music!  It was a lovely evening and we will miss everyone though hopefully we will see them on the cut somewhere this summer. 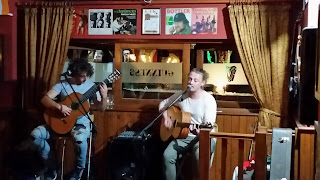 At the market I found a stall I hadn’t seen before and bought a silver Indalo man pendant.


Over the years, the Indalo has become the best known symbol of Almería. Some see this figure as a man holding a rainbow, but it might also be an archer pointing a bow towards the sky. The Indalo lent its name to the artistic and intellectual movement of the Indalianos led by Jesús de Perceval and Eugenio d'Ors which was a movement of nostalgic attraction by the people of Mojácar. The people of Mojácar painted Indalos with chalk on the walls of their houses to guard against storms and the Evil Eye.