Our last day and the sun shone for us :-)  Last night the owner of La Cabaña, Jorge, sat down with us and said that it has been the worst January for many, many years and that he is sure it will be better next year!  I do hope he is right.

We went down to the Parque Commercial as I wanted to get a few bits and pieces then returned to the apartment.  We were going to have tapas but I remembered that there was stuff in the fridge that needed eating.  I did a bit more packing then we took Muffin onto the beach for the last time.  It was a glorious day but that seemed a to make me feel worse about going home tomorrow.  We walked almost up to Thomas's roundabout and then went up onto the promenade as I wanted to see if we could see next year's apartment - just about! (It’s the apartment between the two palm trees!) It took us ages to walk back as we kept getting into conversation with other British dog owners! 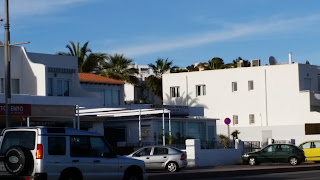 Back at the apartment I finished the packing and sorting.  We brought far too much stuff and clothes but now I know what do need and don't need.  I have about 6 lists on the laptop which I must follow next year!
Richard cooked the dinner, well heated up a chicken dish which I had cooked a few days ago, and frozen along with microwave rice (what a brilliant invention!)

We finished watching Downton Abbey - we just have the last Christmas special to watch now but that will have to be at home as I didn’t have it downloaded.

The alarm went at 7am -yuk :-( However we had the most amazing sunrise – we aren’t normally awake in time to see them! 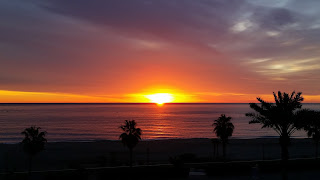 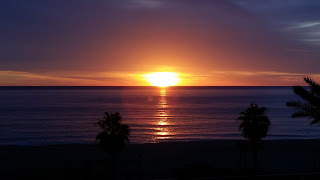 Last minute packing and before we knew where we were it was 9am and Sue, Andy and Roly arrived to help us get all the stuff downstairs.  We had put very everything out on the landing as we were the only people living on our floor and the crew were rather amazed at how much stuff we had!  We got a good rhythm going with me loading up the elevator and taking it down, unloading it then Andy and Roly would take it to the car where Richard was loading.  It didn't take long and it was soon time a fond farewell and chants of "see you on the canals this summer and if not in Mojacar next year".

Richard and I went for breakfast at Cafe Moca before starting our journey - we had about 1200 miles in front of us. 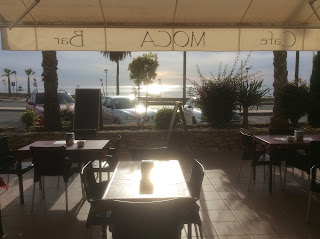 As we had come down to west side of France and we decided to go back up the east side of Spain and through the middle of France.  It was a lovely drive watching the landscape changing from barren mountains and dry valleys to lovely trees and pretty spectacular mountains.  We stopped to eat the sandwiches we had bought at Cafe Moca and then drove on.

There are two motorways.  One is a toll and one isn't.  There doesn't seem to be much difference in the mileage but it cost us €28 to use the toll one - we will use the other one next time!

We arrived at our hotel just before 4pm - we had been on the road for 6.5 hours and had covered 408 miles.   The hotel seemed nice enough and the chap behind the reception desk spoke excellent English and was extremely helpful.  Our room was big and had a sea view (which I had asked for when I booked). 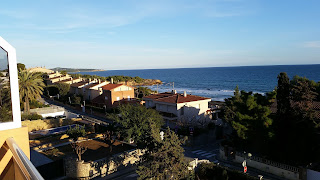 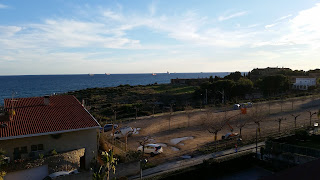 We took ourselves off into Tarragona which was declared a "World Heritage City" by UNESCO on the 30th November of 2000.  In the year 45 BC the Romans built the walls and a port and called it "Colonia Urbs Triumphalis Tarraconensis".  It was getting late but we found the old town square and a cafe with outside seating where we could eat with Muffin.  Next year we will have 2 days in Tarragona so we have time to explore. 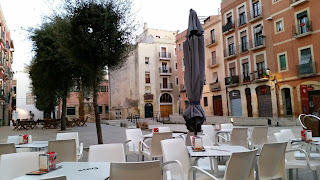 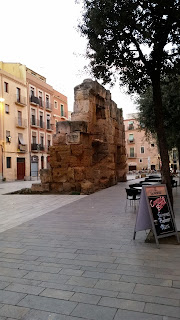 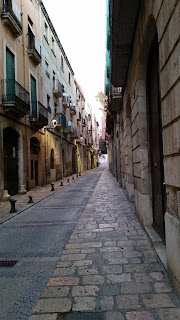 Back at the hotel we watched a film before falling asleep.  This time I have an HDMI cable with us which I can use to connect the TV to my iPad where the downloaded films are.